God and Christians for Trump 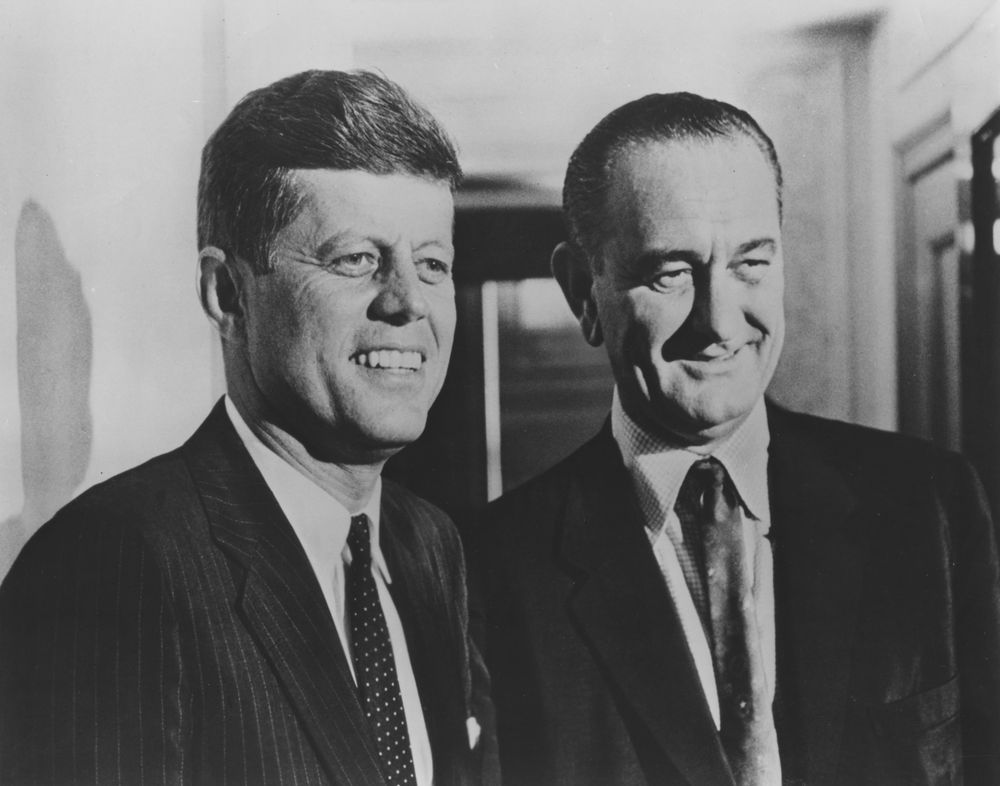 Many people have been critical of Christian churches worldwide because they are mainly silent when it comes to people's rights, which have been forfeited for many years.  In the United States, there is a good reason for this silence - It is called 501(c)(3), which was instigated by Senator Lyndon B. Johnson in 1954.  Johnson immediately succeeded J.F. Kennedy as President of the United States. Following Kennedy's assassination in 1963.  Both are pictured at right — photo courtesy JOHN F. KENNEDY PRESIDENTIAL LIBRARY AND MUSEUM.  As part of his political agenda, Johnson, an opponent to the church, had it in mind to silence the church and eliminate the significant influence the church had always had on shaping "public policy."

Section 501(c)(3) of the Internal Revenue Code brought churches into the realm of tax-exempt entities.  As Willie Martin explains in his article of 17 June 2012; "As part of this legislation, churches would incorporate, and having that status, they could not be sued in a legal action.  This was promoted as a 'benefit' to the churches."

The churches live up to their reputation as ignorant and many of their leaders know very little about the real world we live in.  I can never understand why people would go to a church and listen to Ministers who know little or nothing about the real world.  In many cases, it's the "ignorant leading the ignorant."

The churches never bothered to consult the scriptures and historical law which under the "Law of Charities" (English common law), stated that churches cannot be sued.  They relied instead on advice from lawyers and the 'legal profession' who recommended acceptance of this new "benefit."
(ref. Willie Martin, 2012)  "The whole concept of a limited liability was the bait to get churches incorporated.....", and these ignorant ministers took the bait.

Section 501(c)(3), was used by church opposition to restricting the free speech of the church, for example, to prevent them from criticizing homosexual marriages, campaigning against open borders and campaigning against inter-racial marriages etc.  The church has been silent for so long, which has resulted in much damage in America and other Western countries.  We are sure that the same technique has been used in other Western countries to silence churches from criticizing government policies.

President Donald Trump of the United States was sworn in on January 8, 2017.   Mr. Trump has free the churches from the restraints of 501(c)(3), which them from free speech,  Trump Promises to Give Back Free Speech to the Churches Trump gives churches free speech and tax exemption.  Hillary Clinton did not campaign to change this law - she wanted to keep it as it is.  International Globalists said that 2016 will be the last year for free speech.  What would have happened in America in 2016 under the New World Order would have affected the entire world!  Now that Mr. Trump has been elected there will be a chance to turn things around.  If Clinton had been chosen, things would have continued as they have been for the last 60 years and ultimately spiral downwards.

Some people have accused the Internal Revenue Service (IRS) in the United States of using this law to silence European churches (as well as the Jewish religious groups) in America and turning a blind eye to black African churches.  The Mormon Church was set up as a European Church by its founders in the United States but was forced by former President Jimmy Carter, to allow Africans into the church otherwise they would lose their tax exemption status. The church relented and allowed Africans into the church and instead of being a European church, it is now African and European.

Ministry and the 501c3 Application Gag

'The Great Prophecy of Donald Trump'

Trump to Pastors:  'Christians Have Been Silenced Like a Child'

What does God think of Donald Trump?

God's Plan For Trump - A Vision Of America's Future

For more articles on Christianity, please follow these links:

Christians and God Against Globalism

Changes made to Christianity