The Miami Herald’s devastating four-part series on the convicted sex-trafficking pedophile Jeffrey Epstein exposes a most foul Jewish community collusion in these activities.

“…for that day shall not come, except there come a falling away first, and that man of sin be revealed, the son of perdition…”  —2 Thessalonians 2:3 (KJV)

Many years ago The Most Honorable Elijah Muhammad made a shocking charge against American society. He wrote that “Little children are being taught sex almost from the cradle, making the whole nation…nearly 90 per cent freaks of nature.” In Our Saviour Has Arrived he called the freak society we now inhabit “the Jew’s civilization.”

The reports of wealthy and powerful Jewish men facing sexual abuse, rape, and harassment allegations lengthen weekly. New charges about the disgraced head of CBS Leslie Moonves were recently revealed in the New York Times, and the truth of his apparent racist vendetta against Janet Jackson and actress Victoria Rowell has now come to light. The list of notorious Jews who have been charged with sexual offenses in the entertainment industry includes major figures such as Harvey Weinstein, Dustin Hoffman, Jeffrey Tambor, Jeremy Piven, Matt Lauer, Woody Allen, James Toback, Brett Ratner, Israel Horowitz, and Mark Halperin. So many Jewish men have been ensnared that one rabbi titled his lengthy and introspective essay “//medium.com/@danielbrenner/are-jewish-men-pigs-7bd05fd79b05" target="_blank" rel="noopener">Are Jewish Men Pigs?” Jewish comedian Larry David opened his monologue on Saturday Night Live with an elephantine observation:

“You know, a lot of sexual harassment stuff in the news of late and I couldn’t help but notice a very disturbing pattern emerging, which is that many of the predators — not all, but many of them — are Jews.”

David was criticized but some rabbis have actually added an addendum to their 2018 Yom Kippur or “atonement” prayer: “For the sin we committed through inappropriate use of power…by inappropriate sexual advances, and…not being aware of our own power or privilege when making an advance…”

The Miami Herald’s devastating four-part series on the convicted sex-trafficking pedophile Jeffrey Epstein exposes a most foul Jewish community collusion in these activities. One might think that such a man with his record of decadence would cause a people to disown him. Instead, the most powerful Jewish forces have come to his aid to save him and actually criminalize the very children he victimized. 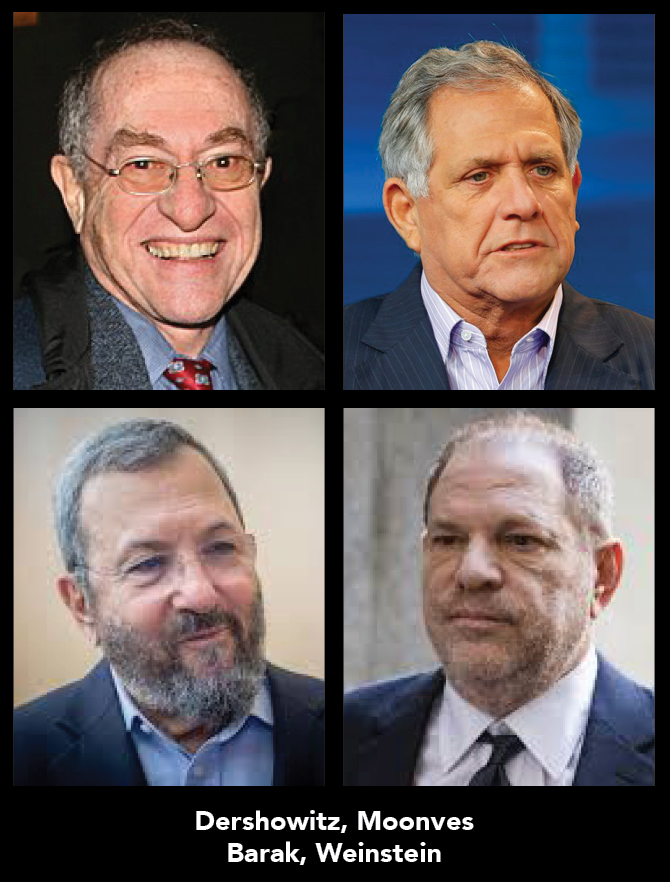 The list of the high and mighty he befriended included the now President Donald Trump, who called Epstein a “terrific guy” who “likes beautiful women…on the younger side.” Also among his cohorts were Great Britain’s Prince Andrew, former president Bill Clinton, and Israel’s prime minister Ehud Barak, who recently distinguished himself as the man who advised another sex deviant Harvey Weinstein—not to repent, but to hire a notorious group of ex-Mossad agents known as Black Cube to threaten and intimidate and slander his accusers. Also caught in the Epstein dragnet is the shyster attorney Alan Dershowitz. The Herald revealed that their relationship was so intimate that Epstein had lent Dershowitz one of his many mansions.

All these notables regularly visited Epstein’s opulent temples of statutory rape with apparent regularity, some arriving there on Epstein’s private jet nicknamed the “Lolita Express”—a reference to the novel about a child molester and his sexual obsession for his own step-daughter, a 12-year-old girl he called Lolita. Of course, those world leaders all deny any knowledge of why those hundreds of pubescent girls were in the Epstein compound all day and night—sans schoolbooks or parental supervision.

Once Florida agents arrested Epstein, his crimes against humanity quickly metastasized into crimes against the American “justice system.” For anyone else, the sentence for making sexual merchandise of young girls would be life in prison, hard time. But with the “help” of a retinue of highly paid and fanged attorneys—most of them Jewish—Epstein was almost rewarded for his crimes, and to this day none of his many operatives ever had to face questioning, much less prosecution. Alan Dershowitz led the team of legal corrupters that negotiated for his friend an extraordinary deal allowing the sex trafficker to spend just 13 months of his 18-month sentence in the county jail. Not only that: at the jail Epstein had a private wing, where he was able to hire his own security detail. He was even allowed to go to his downtown West Palm Beach office for “work release,” up to 12 hours a day, six days a week.

Let us remember that Bill Cosby is today in a maximum-security prison serving a 3-to-10-year sentence after a highly questionable trial for a sex crime against a single adult female acquaintance. Epstein molested and raped 40 underage girls he had ensnared in a sophisticated human trafficking network. Dershowitz responded typically: “I’m very proud of that deal.”

And well he should be. The hundreds of female victims of predator Epstein’s enterprise, which Dershowitz takes such pride in, should know that everything that happened to them—the rape, the forced prostitution, the defilement, and even their abuser’s get-out-of-jail-free treatment—is in perfect harmony with the Jewish “holy book” Talmud, a revered rabbinical text that Prime Minister Benjamin Netanyahu has pledged to make the Law of the land in Israel. According to the Talmud section “Sanhedrin 81b–82a,” all female Gentiles are regarded as “menstrual filth, slaves, heathens and whores.” Further, and for good measure, section “Shabbat 152a” states plainly that “A woman is a sack full of excrement, brimming with niddah (“menstrual blood”) at its opening…” The Talmud reserves its most filthy denigration for the woman that Muslims consider to be the very best of women—Mary, the mother of Jesus. The Talmud says that she was a whore who had sex with many men and that her son Jesus—the Saviour of Christendom—was a bastard who should be boiled in “shit.” 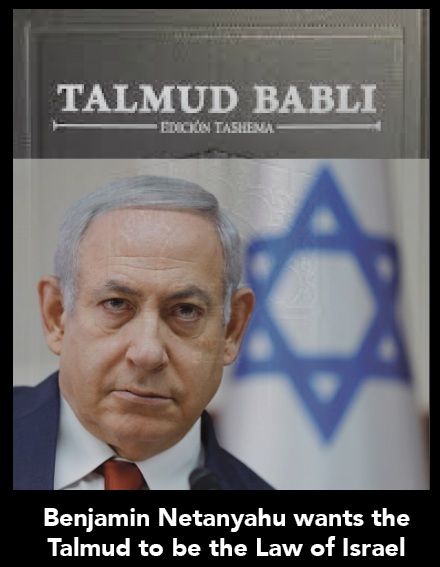 There is nothing in the canon of Catholicism that countenances the actions of the predator priests—those pedophilic behaviors though prevalent are alien to church doctrine. But in Judaism the Talmud allows sexual intercourse between men and girls “less than 3 years old.” It reasons that the adult Jewish child rapist “has done nothing, as intercourse with a girl less than three years old is tantamount to poking a finger into the eye.” This Judaic permit for pedophilia is found in the Talmud section “Niddah 44b.”

Jews like Epstein have always practiced what the Talmud preaches. According to the Jewish Encyclopedia, “the worship of the sexual was prominent in their cults; and ritual prostitution was a recognized and wide-spread institution…and sexual purity was regarded as of little moment.” In the 15th century, Jewish slave-traders from Portugal set up their operations on the islands off the west coast of Africa. They kidnapped African women specifically to rape, impregnate, and breed a half-Black offspring called lancados to conduct the slave trade for them!

Rabbi and scholar Louis M. Epstein may or may not be related to Jeffrey, but what he wrote in his book Sex Laws and Customs in Judaism about the treatment of the females enslaved by Jewish men could easily have served as the FBI’s indictment:

“The female slave was a sex tool beneath the level of moral considerations. She was an economic good, useful, in addition to her menial labor, for breeding more slaves. To attain that purpose, the master mated her promiscuously according to his breeding plans. The master himself and his sons and other members of his household took turns with her for the increase of the family wealth, as well as for satisfaction of their extra-marital sex desires. Guests and neighbors too were invited to that luxury.”

American Jews tried mightily to maintain Black slavery, from which they had grown inordinately wealthy, but after emancipation Jewish men turned to white slavery, the debauchery of their own women. Israeli scholar Robert A. Rockaway wrote:

“Starting in the 1870s, Jews played an increasingly conspicuous role in commercial prostitution. By the twentieth century, Yiddish-speaking Jews dominated the international white slavery traffic, especially in Jewish women, out of Eastern Europe…”

White slavery and the moral degradation of women were so completely associated with Jews that their leaders finally succumbed to pressure to join the international battle to fight the trafficking of women and girls. Jewish pimps and prostitutes had infested every major city and destroyed the moral fiber of every society where they existed. 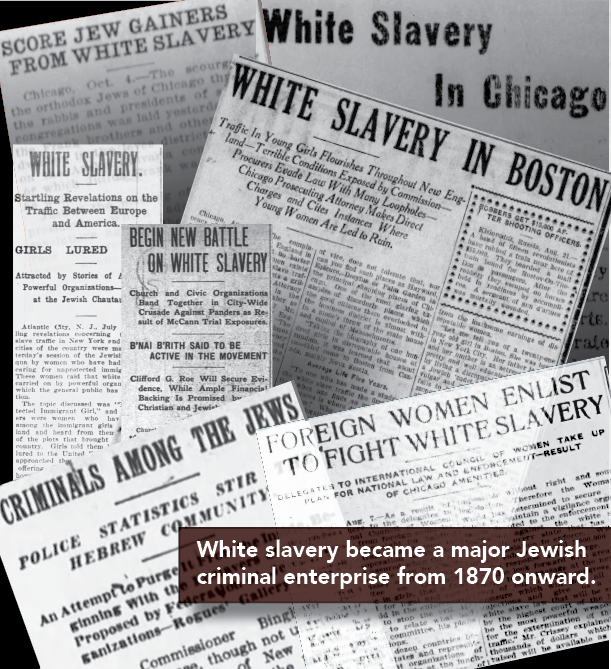 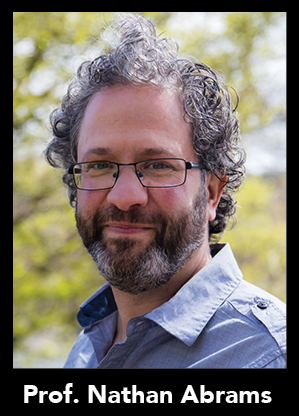 “[T]hereʼs no getting away from the fact that secular Jews have played (and still continue to play) a disproportionate role throughout the adult film industry in America. Jewish involvement in pornography has a long history in the United States, as Jews have helped to transform a fringe subculture into what has become a primary constituent of Americana. These are the ʻtrue blue Jewsʼ.”

America will one day heed the words of The Most Honorable Elijah Muhammad and his standard bearer The Honorable Minister Louis Farrakhan and free its girls and women from these proud debauchers and their supporters and enablers. One must now ask, What is this hateful Jewish tradition that makes an Alan Dershowitz so “proud” to put a Jeffrey Epstein back among our girls and young women? What belief system motivates an Ehud Barak to counsel a Harvey Weinstein on how to escape prosecution? What conclusion will Gentile America reach when they compare Dershowitz and his friend Epstein with the heart and mind of the man who leads Black America —The Honorable Minister Louis Farrakhan? The Minister said to a Detroit audience:

One of the worst things that a man can do is abuse a woman, take advantage of a woman….Women are Sacred. If you don’t see yourself as sacred, it’s because Satan has robbed you of the knowledge of who you are and ripped you off from your divine destiny.…I want you little sisters to listen. You’re not some cheap thing for men to use for pleasure and discard you. You’re the Woman of God. You make a future for us. We have no future except that future comes through a woman.…You are a Sacred Woman. Every prophet of God came from your womb. Every scientist, every great mind, every great man, every great woman came from your womb.…The Bible says a Virtuous Woman is more valuable than silver and gold. Sisters, you have to recognize your sacredness…

In which society would women feel honored and respected—that of the Nation of Islam, or in Dershowitz & Epstein’s “Jew’s civilization”? That day is coming soon when righteous men will stand up for our women and confront those who have made it sport to prey on them. Alan Dershowitz, Jeffrey Epstein, Leslie Moonves, and Harvey Weinstein may not be “proud” of it, but our girls and women will NEVER AGAIN have to cry “Me Too.”