Destruction of the European People 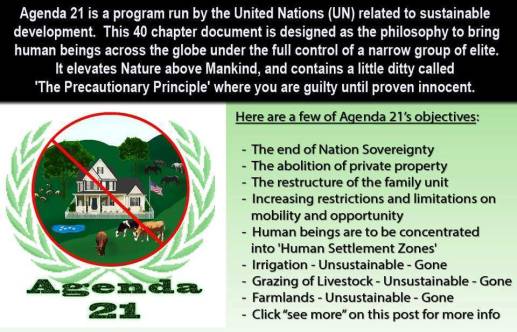 United Nations Agenda 21 is a program run by the United Nations to gain control of all land and countries under the guise of "sustainable development."  It is a part of the New World Order program and universal government approach which they have been working on for a number of years.  Agenda 21 has now been superseded by Agenda 2030.

The promotion of Agenda 21 is a way to ensure the destruction of all private property ownership, including farms, houses, and businesses to reduce world population.  It will remove and destroy all constitutions, restrict free speech and disarm the people.  When Agenda 21 is fully realized, the United Nations will be in possession of all guns and subsequently, there will be no opposition to their control.

THIS IS THE DIFFERENCE BETWEEN AGENDA 21 AND AGENDA 2030

Santa Cruz has been the US test case for putting Agenda 21 into action over the entire country. There is a scary map which shows the Wildlands Project, part of Agenda 21.  It demonstrates how fifty percent of the country, will be off-limits to people, while the rest of the land will be highly controlled by the Globalists.  There are little black spots on the map which show the locations of all the high-rise buildings to be built.

The legislation use terms such as, "sustainable population", which sounds very sweet and nice but the underlying concept are much more sinister.  The Globalist want reduce the world population by about 80% and turn all countries into third world standed of living.

Agenda 21: The United Nations Diabolical Plan for the World is Explained

WARNING: THIS WILL UPSET YOU. AGENDA 21 PLANNERS DISCUSS YOUR FUTURE.

Agenda 21: The End of Private Property Has Begun...

Agenda 21 in Less Than 5 Minutes

This is Agenda 21 California - Government Driving Folks off Their Land

AGENDA 21 COLLEGE: THIS IS WHY THE UNIVERSITIES ARE MELTING DOWN RIGHT NOW.

AGENDA 21 MICRO APARTMENTS ARE NOW MOVING TO THE MIDWEST.

SOCIETY OF RENTERS: MASSIVE POVERTY IS BEING PLANNED FOR AMERICA'S FUTURE. AGENDA 21.

Your Children Aren't Yours

What Our Government Forgot To Tell You