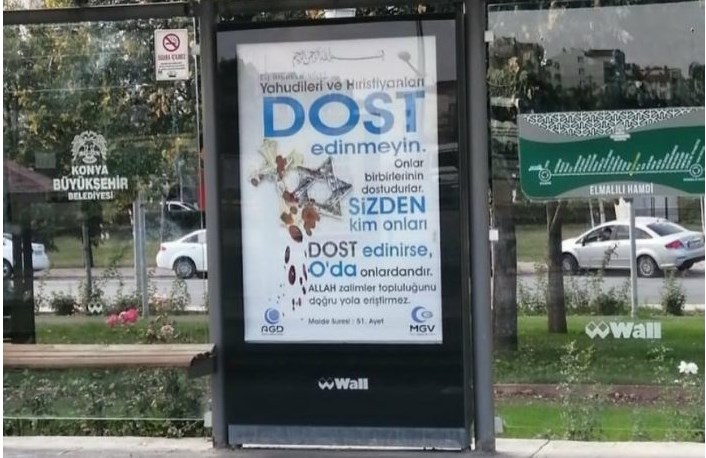 Billboard: calling for Muslims not to take Christians & Jews as friends 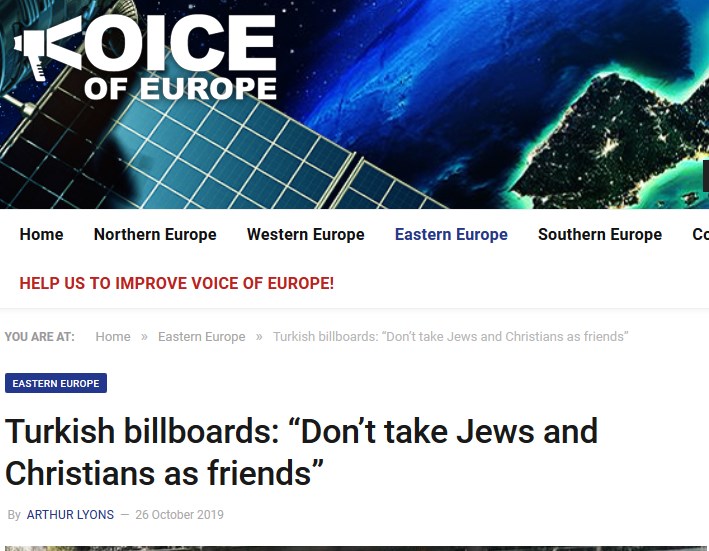 Billboard displayings:  Quranic verses calling for Muslims not to take Christians and Jews as friends were spotted in the Turkish city of Konya earlier this week.

“Do not take the Jews and the Christians as allies. They are [in fact]allies of one another. And whoever is an ally to them among you – then indeed, he is [one]of them. Indeed, Allah guides not the wrongdoing people,” the posters say, citing Quranic chapter five, verse 51.

To the side of the Quranic quote are a cross and a star of David with bloodstains.

The posters are believed to have been put up by Islamist organizations. Below the Quranic verse are the logos of AGD and MGV, two organizations that are affiliated with the Islamist Saadet Partisi (Felicity Party) – a party which belongs to the notorious Millî Görüş movement, SCEPTR reports.

Millî Görüş has been referred to as one of the “the leading Turkish diaspora organizations in Europe” and has also been described as the largest Islamic organization operating in the West.

A spokesperson for the city has said that the municipality’s AKP administration was not responsible for the contents of the posters.

Garo Paylan, a representative for the HDP party – a party represents the Kurds and other religious minorities in Turkey – said that he would be presenting that issue to the Turkish parliament.