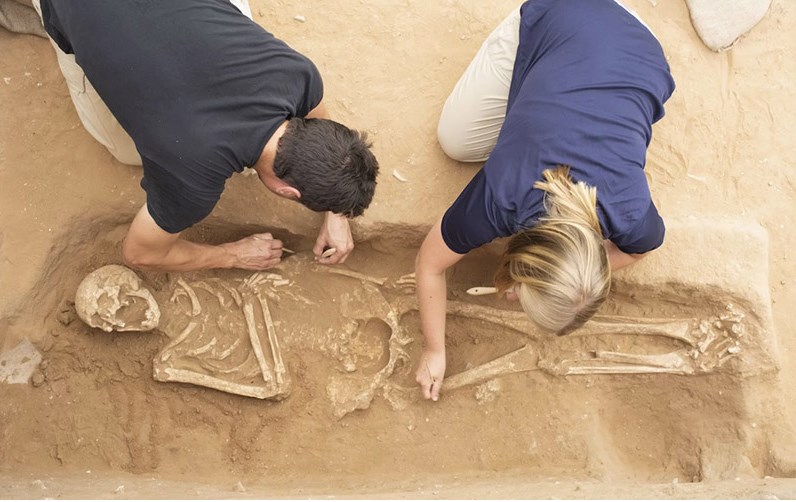 The Philistine people—who gave their name to the land called Palestine—and who were the ancient Jews’ greatest enemy, as recorded in the bible—were of European origin, groundbreaking DNA studies have shown.

The Philistines were believed to have arrived in Palestine—now called Israel—in the 12th century BC as part of the Indo-European settlement of the Near Middle East.

They soon became determined enemies of the Jews in that territory, perhaps best-known from the biblical story of David and Goliath—a story of a giant Philistine warrior allegedly killed by a diminutive Jew with a slingshot during a battle in the Valley of Elah, southeast of what is now Tel-Aviv.

The hatred between Jews and Philistines became a dominant theme of the history of the land between the Dead Sea and the Mediterranean Sea, to the point where in Judaized western Christian culture, to be called a “Philistine” became the equivalent of being insulted and dismissed as a barbarian.

After analyzing the ancient DNA of 10 individuals buried at a Philistine archaeological site, an international team of researchers found that the Philistines descended from people in Greece, Sardinia or even Iberia (present-day Spain and Portugal). These ancestors migrated across the Mediterranean during the late Bronze Age or early Iron age, about 3,000 years ago.

But this European genetic signal was short-lived. Once the Philistines arrived in the southern Levant, an area encompassing the eastern Mediterranean, they intermarried with the locals. “Within no more than two centuries, this genetic footprint introduced during the early Iron Age is no longer detectable and seems to be diluted by a local Levantine-related gene pool,” study co-researcher Choongwon Jeong, an archaeogeneticist at the Max Planck Institute of the Science of Human History in Jena, Germany, said in a statement.

The geneticists sampled more than 100 specimens, mainly teeth and inner ear bones, which are both known to be good preservers of ancient DNA. But the researchers got DNA results from only 11 specimens belonging to 10 individuals who lived between 3,600 and 2,800 years ago.

Daniel Master, the director of the expedition, said that “the idea that the Philistines were immigrants was something we could never demonstrate before.”

Bones extracted from the site of the Ashkelon Philistine Cemetery were sent to the Max Planck Institute for the Science of Human History in Jena, Germany, for DNA analysis. The technique was not available to archaeologists when the bones were originally discovered in 2016.