It is brutal here in communist Canada.
MUST SEE - Canada Launches Nationwide Manhunt For Anti-Lockdown Protester
mgwicks
Canada's parliament just voted 327 - 1 to suspend elections until the "pandemic" ends. Not making this up. https://www.youtube.com/watch?v=uuOyFT36EkE
ThatOtherView
Chris Sky is absolutely right. It is brutal here in communist Canada. Has anyone heard of Romana Didulo supposedly put in place by the US as Commander In Chief of Canada? She has a Telegram page. Very interesting lady with some very tough talk on executions and anti covid lockdowns. You wouldn't think this would be tolerated if she were not speaking the truth. Would like to hear her on the Alex Jones show or on Owen Shroyer War Room. Her link to Telegram is t.me/s/romanadidulo if anyone is interested. Check her out she posts daily.
Alex1956
13 days ago As a former American cop from decades past, I am more than disgusted, I am outraged! An officer's first duty is to uphold the Constitution, protect and safeguard the rights and freedoms of the people! This cannot be allowed! In the US, no one, not any military service member, police officer or public official can act against the Constitution. Canada is toast unless the people rise up and stop this insanity! I can't state what I would like to see happen, but put it this way, I would like to see Canadians "do what is necessary to get the point across to the masked goons". By the way, why continue this mask crap? It doesn't work! It dehumanizes people and shields a person's identity from accountability.
American5150
WE GOTTA GO AFTER THE ROCKEFELLER FOUNDATION. THEY ARE NEVE MENTIONED AND YET THEY ARE THE MOST INVOLVED AND DEEP ROOTED IN THIS. WE GOTTA ROUND THEM UP.
Litlegirl80
Isn't it funny that rebel news got kicked off PayPal but not Chris. Also how long have they've been doing this and it hasn't solved anything, opening the businesses, stop wearing the masks.
Present Canadian PM

“Today, while we celebrate Israel’s independence, we also reaffirm our commitment to fight anti-Semitism and anti-Zionism.”

Re: Jews are dangerousAccording to the Jerusalem Post, Canada has become a more dangerous place for Jews and Justin Trudeau gets blamed for it. 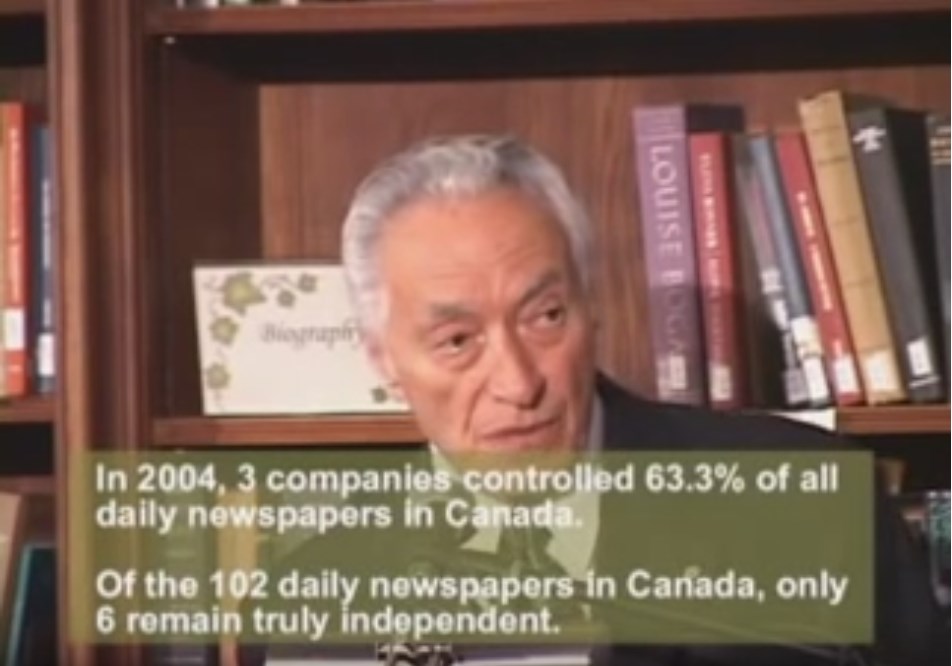 Of the 102 daily newspapers in Canada , only 6 remain truly independent .”(1)

The Truth About Canada 1 www.youtube.com/watch?v=d8D67YiLcOM   Source (1) 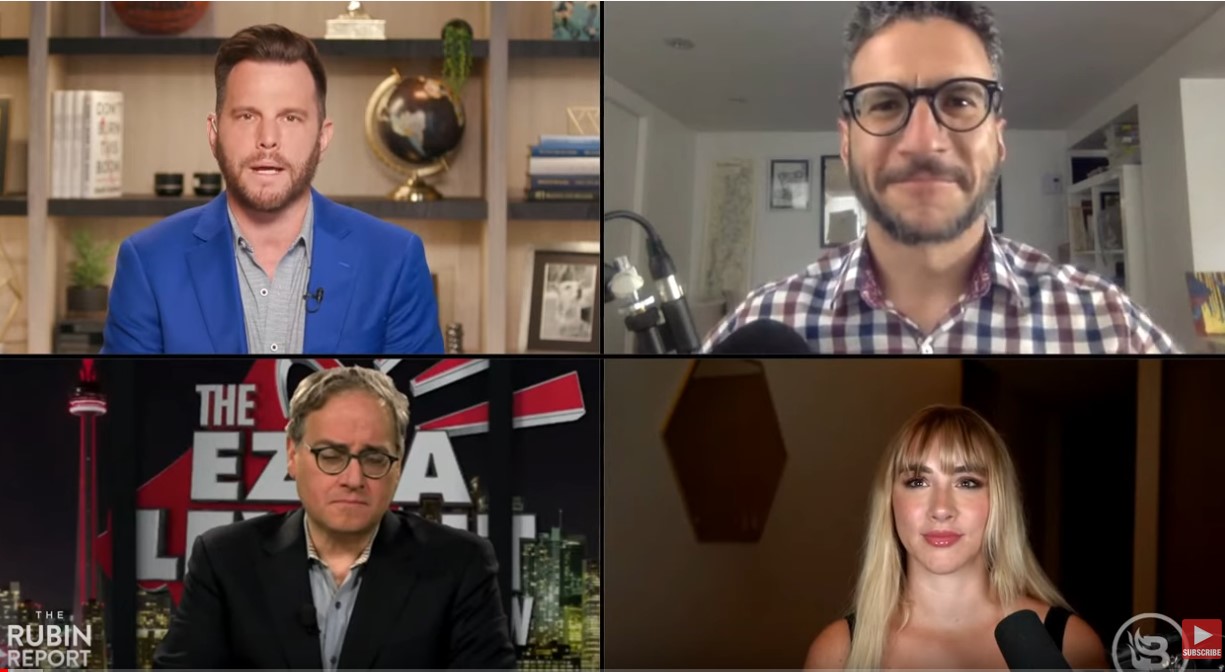 It's like we are living in the start of communist Canada. pandoraz muzik box
Ezra Levan runs Rebel news in Canada. He is a Jewish Canadian hero! This guy will be remembered in History.

Rubin Report Get the latest information from The Luxembourg Government about COVID-19.

Mikhaila is completely off guard saying that she doesn’t “suspect anything evil”. Unfortunately there is a very clear, global agenda, which is anything but benevolent.

This is about Trudeau having a finite amount of time to meet the outcome set out by the Davos Forum. He is neatly on course. Operating from fear? That's some horseshit. He knows exactly what he is doing.

When did an "order" or a "mandate" become a "Law"?? A law is an enforceable set of rules approved by the majority of representatives of the people who voted for those representatives to represent those peoples best interests. Mandates and orders are being issued by individuals who were not voted to represent the people. And they are promoting these orders and mandates as "laws". And they are not. Until people rise up and rebel in large enough numbers, such that it overwhelms the system of control, the people will be controlled by those with ulterior motives. All in the disguise of safety for the masses.

Well Trudeau said when he got elected we wouldn’t recognize Canada when he was finished, sadly he’s keeping his promise and none of it is good
Justin Trudeau

Same thing in Spain. Evil disguises as common well-being. Most ppl buy it

Blending in with the Monsters. edited

As long as a huge chunk of the population are smart enough to avoid the "vaccine" we will save the human races from extinction. 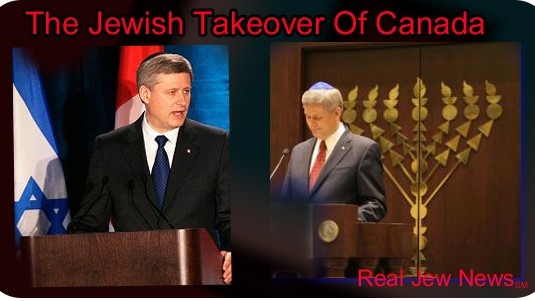 IT ALL BEGAN with Pierre Elliot Trudeau, who ruled as Prime Minister of Canada from 1968 to 1984.

The year “1984″ which saw the summation of Trudeau’s policies—namely the Jewification of Canada—is an apt metaphor for the police-state grip that Jewry now wields on the once sovereign and Christian nation of Canada, currently a vassal of the global Zionist beast.

Although some argue that Trudeau showed himself as an anti-Semite and pro-Palestinian, in reality, he bowed to Zionist pressure both from American and Canadian Jewry. 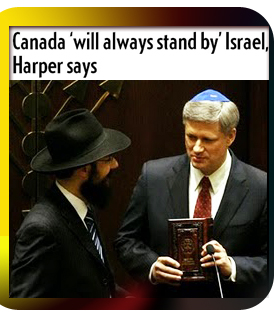 With the rise of the Jewish Lobby in Canada after Israel’s Six Day War, it was the Canadian Jewish Congress, the Canadian Zionist Organization, and B’nai B’rith, that established the Canada-Israel Committee (CIC) to act on behalf of Jewish interests in all of Canada’s domestic and foreign affairs.

Today under the Harper administration, the Jewish Lobby has expanded its influence which enjoys total control over their Gentile pawn, Prime Minister, Stephen Harper, who, as the expression goes, “is more Jewish than the rabbi.”

“We are morally obliged to stand up to threats against Israel,” Harper recently vowed to a Jewish audience at a standing-room-only rented hall in downtown Toronto.

Harper’s “moral” fixation on Israel and disregard of Israel’s “immoral” genocide of the Palestinians notwithstanding, one is inclined to believe that Jewish money and votes is the “obliging” motive behind Harper’s avowals to his most favored constituency.

And with such groups as the Canadian Jewish Political Affairs Committee; the Centre for Israel and Jewish Affairs (Canada’s counterpart to America’s AIPAC); the Jewish Federations of North America; and the Jewish Defense League, the strangle hold of Jewry on Canada’s national policies is secure. View Entire Story Here, Here, Here & Here. 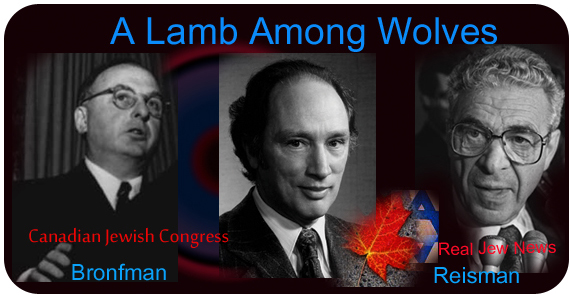 BOWING TO THE THREAT to cut off funding to Trudeau’s Liberal Party by Canadian Jewry, the former Prime Minister found himself in a position of humiliation and political compromise.

Due to his sympathies for the plight of the Palestinians after the Six Day War, the Jewish Lobby reacted by pressing Trudeau into departing from the policies of his predecessor, Lester Pearson, who was averse to granting a prominent role of Jews in the government.

And ever since, Canada has been under the tyranny of Jewish rule. View Entire Story Here, Here, Here & Here.

JEWRY SOUNDED THE DEATH KNELL of free speech in Canada in 1975.

When Trudeau’s invitation for a UN conference on international crime with PLO participation (holding observer status at the UN) to be held in Toronto was opposed by the Canadian Jewish Lobby, Trudeau caved in to the intense pressure.

This was against the advice of his then Secretary of External Affairs, Allan McEachen, who wished to separate Canadian interests from Israel’s.

The Toronto Star, then under the auspices of the Joseph Atkinson Foundation, a Gentile entity, decried the cancellation as a “humiliation” to Canada in “abandoning” principle and “giving into” threats.

The Zionist issue came to a boil when Israel’s Prime Minister, Menachim Begin, was invited by the Canada-Israel Committee to speak at Toronto’s Beth Zedek Synagogue. 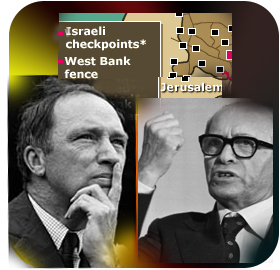 In a provocative speech, Begin called on Canadian Jews to press Trudeau to move the Canadian Embassy from Tel Aviv to Jerusalem. If Trudeau refused, Begin urged his fellow Jews that they were to deny Trudeau’s Liberal Party their votes and support the Conservative Party instead.

Trudeau did refuse, noting that Jerusalem was “defined by the United Nations as one of the occupied territories.”

As far as Trudeau was concerned, Begin’s visit amounted to an interference in Canada’s domestic affairs, resulting, (in what one minister observed), Trudeau harboring a “passionate hatred” for Begin and undergoing a “thorough exasperation” with “Zionist pressure groups.”

But Jewry’s interference with Canada’s policies and its threat to free speech was not to be stopped.

With Canada’s Press and its most popular Television Network, Global, owned and controlled by the Jewish “Izzy” Asper family, (fierce Zionists, whose media empire began in 1975), any exposure of views critical of Jewish interests at the expense of Canada’s, was not permitted.

Since 2003, Izzy’s son, Leonard Asper, has been running the show, (literally), in Canada’s propaganda dissemination, in which all budding journalists’ attempts to present a balanced view of Israel’s activities and policies were censured. 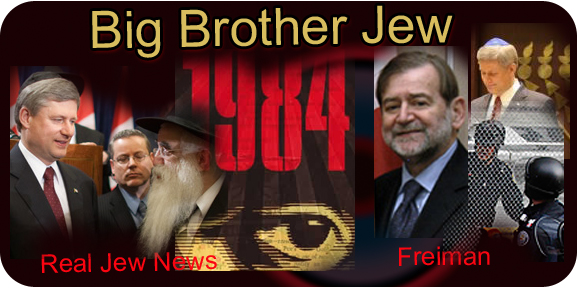 FREE SPEECH IN CANADA received its final blow in 1977, when, via fervent lobbying by the Canadian Jewish Congress and efforts by Toronto Jewish lawyer, Mark Freiman, the Canadian Human Rights Act was enacted into law.

The Canadian Human Rights Act made it a criminal offense to communicate by phone or Internet any material that “exposes a person or persons to hatred or contempt.”

As Edgar J Steele, (now in prison for his own defense of truth), once put it, “hate speech is anything Jews hate to hear.” 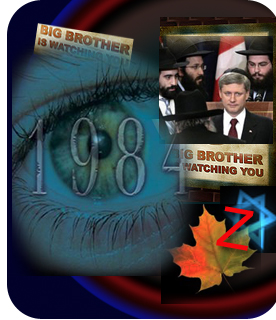 The Canadian Jewish thought police, led by Harry Abrams of Bnai Brith, have enforced this law through various harassments, prosecutions, imprisonments, and lately, assaults on academic freedom and YouTube videos.

Typical of such Jewish tyranny in silencing academic discourse was the cancellation of a debate to be held at Dalhousie University in Halifax, Nova Scotia. Black Studies professor, David Divine, was slated to go toe-to-toe with White Identity publicist, Jared Taylor, in a forum entitled, “Is Racial Diversity Good For Canada?”

But the Jewish Media Network, CanWest, run by Leonard Asper, condemned the debate as a meeting between a ‘naive black professor’ and a ‘pre-meditating racist.’ Caving into Jewry’s media pressure, the University cancelled the debate.

JEWISH POLICING of YouTube videos saw a recent offering by David Duke removed from a Canadian Website in April of 2011.

Without dispute, (you better not), in Canada — the keyboards, tongues, and pens of those yearning to tell the truth — are under the censuring eye of Big Brother Jew

Two things not mentioned in the article.

Firstly, the prosecution/persecution of Ernst Zundel and his two trials for distributing the booklet DID SIX MILLION REALLY DIE? www.zundelsite.org

Anyone with a brain to think knows that Jews were behind his ordeals.Secondly, the Israeli Mossad used Canadian passports for its agents in their missions overseas and got caught red handed. They made an insincere apology and received a slap on the wrist.

This occurred in the 1980’s/90’s and was news at the time but now appears to have gone down the memory hole. Former Mossad officer Victor Ostrovsky writes about it in his books BY WAY OF DECEPTION and THE OTHER SIDE OF DECEPTION.

The Socialist Myth of the Greedy Banker

The Socialist Myth of Economic Monopoly

Justin Trudeau: 9 Things to Know About His Parents | Time

https://time.com/4080306/pierre-justin-margaret-trudeau/
Here are nine things to know about Justin Trudeau's famous parents: 1. His dad was rich Pierre Trudeau grew up in a wealthy family, the son of a multimillionaire.

What Canada's Jews can expect from Justin Trudeau

https://www.cjnews.com/news/canada/what-can-canadian-jews-expect-from-justin-trudeau
Karen Mock, co-founder of the left-leaning Zionist organization JSpace and the former director of the League for Human Rights of B'nai Brith Canada, said she's confident Trudeau will make Canadian Jews feel as safe and supported as Harper did. "I think he will be as good a friend in the kinds of things he says about Israel.
Read 98 times Last modified on Thursday, 17 June 2021 04:26
Tagged under