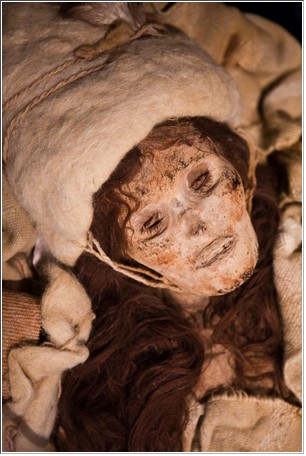 Explorers have been studying several sites in the Tarim Basin of the Taklimakan Desert in northwestern China, along the route of the Silk Road, since the middle of the 19th century. The most important sites were at Ǘrümchi, Chärchän, and Turfan to the east of the basin. Numerous Bronze Age sites contained burials of more than 2,500 people, many of them interred with magnificent textiles of non-Asian origin. The great surprise was the European features of the mummies, and in the case of Chärchän man, his 6’6” height. What could they have been doing there, more than 1,000 miles from settlements of similar-looking people?

In 1934, Swedish archaeologist Folke Bergman explored the lost Xiaohe cemetery in the Tarim Basin. He reported his findings in 1939. Due to the onset of World War II and the subsequent closing of China to Western scientists, Xiaohe was not studied again until 2000, when the Xinjiang Archaeological Institute “rediscovered” it. The burial site consists of 167 graves, many of them intact, from the late Bronze Age nearly 4,000 years ago. The Europoid mummies found at the site exhibit blond hair, long noses, and slender bodies and are in many cases completely preserved and appear lifelike. This preservation is due to the arid, saline conditions in the desert.

Now the politically correct academic and scientific establishment who want to rewrite history to make it "Afro-centric" (and get rid of "dead Caucasian European males") have gotten another jolt of reality from the truth. Recent excavations in the Tarim Basin, in Xinjiang province, have uncovered more than 100 naturally mummified corpses of people who lived there between 4,000 and 2,400 years ago, INDICATING THAT THE ARYAN INCURSION INTO ASIA WAS IN FACT FAR EARLIER AND FAR MORE EXTENSIVE THAN ANYONE PREVIOUSLY BELIEVED.

The bodies were amazingly well preserved by the arid climate, and according to the New York Times "...archaeologists could hardly believe what they saw." The mummies had long noses and skulls, blond or red hair, thin lips, deep-set eyes, and other unmistakably Aryan features.

Dr. Victor H. Mair of the University of Pennsylvania said:

"Because the Tarim Basin Caucasoid corpses are almost certainly representatives of the Indo-European family, and because they date from a time period early enough to have a bearing on the expansion of the Indo-European people from their homeland, it is thought that they will play a crucial role in determining just where that might have been."

One such mummy of a teenaged girl with blond hair and blue eyes, found in a cave, has become quite a tourist attraction in Beijing. She has been nicknamed "The Lady of Tarim" and she is on display to throngs of museum visitors in the Chinese capital.

Apparently she was a princess or a priestess of some kind some 3,000 years ago, for she was buried in fine embroidered garments of wool and leather, along with beautiful jewelry, jars and ornaments of gold, silver, jade and onyx. Her remains are in such a remarkable state of preservation that the dead girl looks as if she were just sleeping.

he Mummies of Xinjiang

In the dry hills of this central Asian province, archeologists have unearthed more than 100 corpses that could be as much as 4,000 years old. Astonishingly well preserved -- and Caucasian. One glimpse of the corpses was enough to shock Victor Mair profoundly. In 1987, Mair, a professor of Chinese at the University of Pennsylvania, was leading a tour group through a museum in the Chinese city of Urumqi, in the central Asian province of Xinjiang, when he accidentally strayed into a gloomy and newly opened room.

There, under glass, lay the recently discovered corpses of a family -- a man, a woman, and a child of two or three -- each clad in long, dark purple woolen garments and felt boots. "Even today I get chills thinking about that first encounter," says Mair. "The Chinese said they were 3,000 years old, yet the bodies looked as if they were buried yesterday."

But the real shock came when Mair looked closely at their faces. In contrast to most central Asian peoples, these corpses had obvious Caucasian, or European, features -- blond hair, long noses, deep-set eyes, and long skulls.

"I was thunderstruck," Mair recalls. "Even though I was supposed to be leading a tour group, I just couldn't leave that room. The questions kept nagging at me: Who were these people? How did they get out here at such an early date?"

The corpses Mair saw that day were just a few of more than 100 dug up by Chinese archeologists over the past 16 years. All of them are astonishingly well preserved. They come from four major burial sites scattered between the arid foothills of the Tian Shan ("Celestial Mountains") in northwest China and the fringes of The Taklimakan Desert, some 150 miles due south.

All together, these bodies, dating from about 2000 B.C. to 300 B.C., constitute significant additions to the world's catalogue of prehistoric mummies.

Unlike the roughly contemporaneous mummies of ancient Egypt, the Xinjiang mummies were not rulers or nobles; they were not interred in pyramids or other such monuments, nor were they subjected to deliberate mummification procedures. They were preserved merely by being buried in the parched, stony desert, where daytime temperatures often soar over 100 degrees. In the heat the bodies were quickly dried, with facial hair, skin, and other tissues remaining largely intact. Where exactly did these apparent Caucasians come from? And what were they doing at remote desert oases in central Asia?

Any answers to these questions will most likely fuel a wide-ranging debate about the role outsiders played in the rise of Chinese civilization. As far back as the second century B.C., Chinese texts refer to alien peoples called the Yuezhi and the Wusun, who lived on China's far western borders; the texts make it clear that these people were regarded as troublesome "barbarians."

Until recently, scholars have tended to downplay evidence of any early trade or contact between China and the West, regarding the development of Chinese civilization as an essentially home-grown affair sealed off from outside influences; indeed, this view is still extremely congenial to the present Chinese regime. Yet some archeologists have begun to argue that these supposed barbarians might have been responsible for introducing into China such basic items as the wheel and the first metal objects. 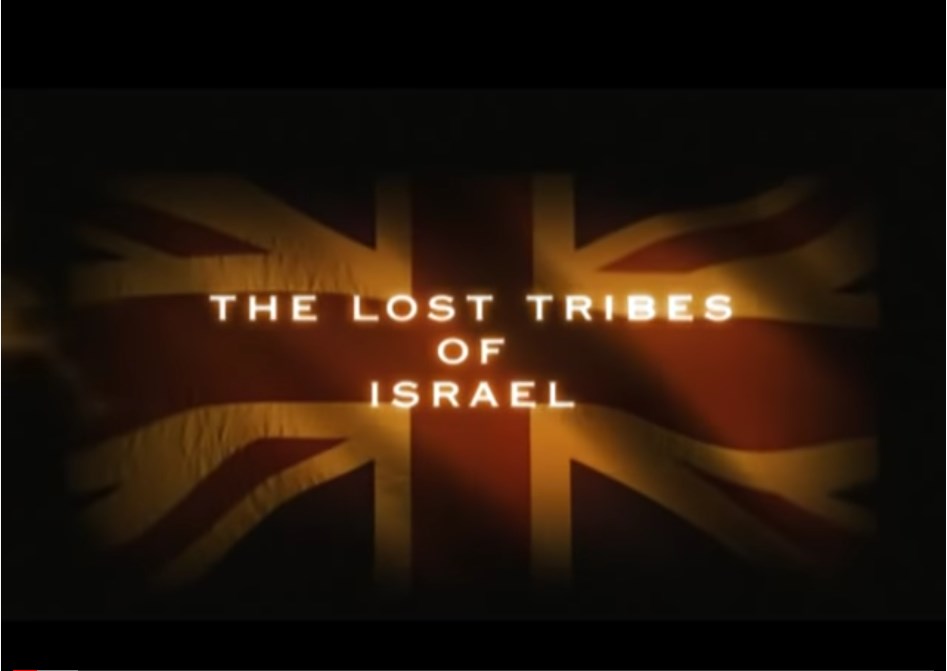 The Lost Tribes of Israel

A documentary that shows from both the Bible and history, where the "Lost Ten Tribes of Israel" were taken during their Assyrian captivity, and where they migrated to after the fall of Assyria, in fulfillment of Bible prophecy.