The Etruscans Came Before The Romans 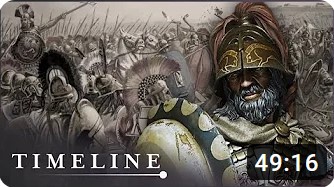 Who Came Before The Romans? | The Etruscans | Timeline
This documentary looks at the fun-loving Etruscans, who invented two spectator sports, gladiatorial combat and chariot racing. They were sophisticated people, with a sculptural and painting tradition, a religion based on human-type gods which they had learned from the Greeks and a complicated set of rituals for divining the future, which they handed down to the Romans.