Serbia is in a difficult position, as the "collective West" demands from Serbia to abandon K&M. In my opinion, the current Serbian government, and the one before, are partially to blame, They wanted to join the EU, trusted to become "friends", played both sides, i.e West and Russia. That gave the EU opportunity to demand more and more concessions from Serbia. Serbia will lose, again, and this time, it will lose two regions as well, Sandzak in the South, and Vojvodina in the North. Your remarks on Orthodox religion are (in my opinion) correct. The "collective West" wants to destroy the Eastern Orthodox religion and Church. It was seen previously, people should read some history books.

(edited)
During the war on the Balkans both regime in Bosnia dominated by muslim leader Izetbegovic and Crotiatn leader Tudjnan tried to create their ortodox church for the local Serbes.They failed.Of course the West was behind.They created their languages exactely like in Ukraine. These languages along with a newcomer Montenegrin language are very very similar dialects of the language that we called Serbo- Croatian. Now my kids in there cv write they speaks fluently four instead of one language.

Royalty From Around the World Who Have Converted Religions

https://www.insider.com/royals-from-around-the-world-who-have-converted-religions-2020-2
Until 2015, British royal descendants who married a Roman Catholic would have to give up their spot in the line of succession. Meghan Markle was baptized before marrying Prince Harry to show her respect for the Queen, and royalty in Monaco and Spain have converted to join the majority faith of their countries.

www.jewornotjew.com/profile.jsp?ID=1400
Would you believe that Queen Elizabeth II might — just might — have Jewish roots? No, we didn't believe it either. Elizabeth's great-great-great-grandmother was horse-faced (sorry, she was!) Duchess Charlotte of Mecklenburg-Strelitz, Queen consort to George III. 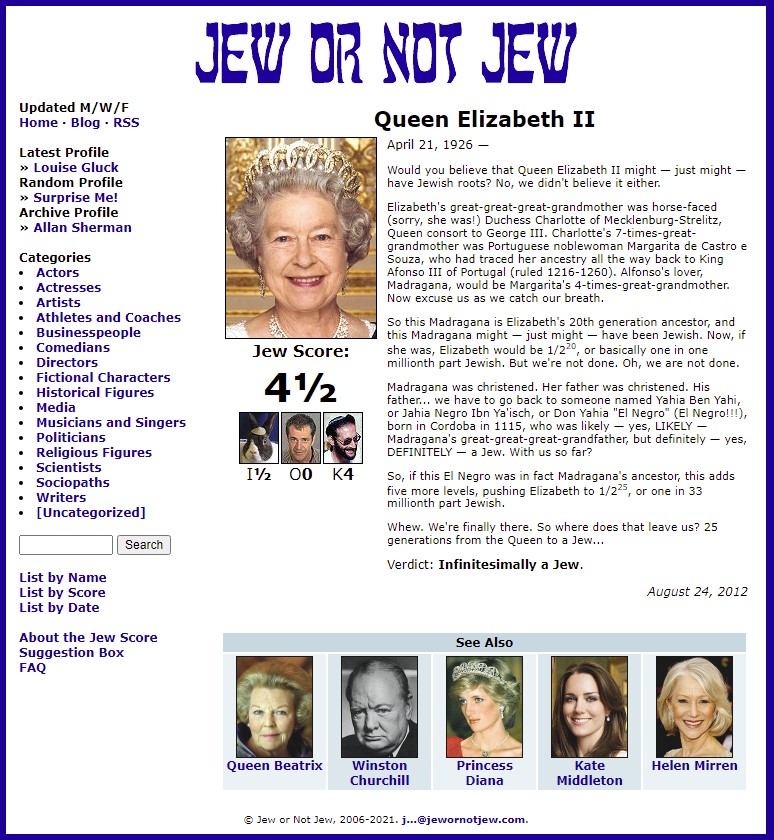 Is Meghan Markle Jewish? The internet is confused | Jewish ...

https://jewishnews.timesofisrael.com/is-meghan-markle-jewish-the-internet-is-confused/
An article in the Daily Express claims that Markle's father is Jewish; Vanity Fair, Elle UK, Tablet and many others have cited the story. The story also says that a spokesperson for Westminster...

All the Jewish Conspiracies Surrounding the British Royal ...

https://www.heyalma.com/jewish-conspiracies-surrounding-british-royal-family/
The British Royal Family started circumcising their sons with George I or Queen Victoria (we'll cover her later), and it was continued by Queen Elizabeth II. Elizabeth's sons — Charles, Andrew, and Edward — were all circumcised by none other than Rabbi Jacob Snowman , a prominent mohel of London's Jewish community.

whale.to/c/zionism_britain.html
The Jewishness of the members of the Royal family does not end up in just one case, there are others in the British royal family who were and are Jews. Princess Diana the bride of queen Elizabeth was also born to a Jewish mother and was thus considered a Jew. Therefore her sons William and Harry are also Jews.

How were the Jews regarded in 16th ... - The British Library

https://www.bl.uk/shakespeare/articles/how-were-the-jews-regarded-in-16th-century-england
Published: 15 Mar 2016 Jews in 16th-century England practised their religion secretly, and many of those raised in the Jewish faith either converted to Christianity or pretended to have done so. James Shapiro considers Elizabethan prejudices and paranoia about Jews, putting Shakespeare's Shylock in context.

https://jewishnews.timesofisrael.com/exclusive-prince-charles-will-convert-judaism-within-three-years/
New Jew: Prince Charles is understood to be in the process of converting. Prince Charles has long fostered a relationship with world Jewry. Unlike his mother, Queen Elizabeth, the heir to the...

https://en.wikipedia.org/wiki/List_of_British_Jewish_nobility_and_gentry
The British nobility consists of two sometimes overlapping entities, the peerage and the gentry.The peerage is a legal system of largely hereditary titles, granted by the Sovereign.Under this system, only the senior family member bears a substantive title (duke, marquess, earl, viscount, baron).The gentry are untitled members of the upper classes, however, exceptions include baronets, knights ...

www.bbc.co.uk/religion/religions/judaism/beliefs/conversion.shtml
Judaism is not a missionary faith and so doesn't actively try to convert people (in many countries anti-Jewish laws prohibited this for centuries). Theo Heser, a Jewish convert, on his wedding day.
More Results

Interesting.
I read that when the Jews were asked: “where are all the mass graves, you’ve told us of and the bodies of dead Jews”? They said: “ah, well the Germans got the Jews to dig up all the graves, load the Jews onto carts and lorries and bring them back to be cremated”.
Yes, that’s what they said.
Only problem is that when a body, is cremated it leaves between 2-3lbs of ash behind. Therefore, with the Auschwitz death toll being some 4.5 million there should have been between 9 and 13.5 million lbs (4,082-6,123 tons) of ash on the grounds, around Auschwitz from the Chimney. And you’ve guessed it, none was found. And nope, they also dug extensively as well and still found no ash.

The whole holocaust narrative is instantly disproved, the minute you start thinking. However, society, as a whole believes in the holocaust. What does this prove? It proves the obvious – people are, today, incapable of thinking.
The sooner billions start taking the vaccination the better. The reason the world’s in the mess it’s in, is because these fools have allowed themselves to be heavily indoctrinated by their worst enemy. They are no longer Christians but Mammonites and followers of the Jew religion of talmudism. They won’t be missed. There far more of a hindrance to truth seekers than a help. And they are the very peoples who will become the snitches of the state, just as in East Germany, although unlike East Germany, it won’t be 2% of the population, but more like 80%. Well, that is those who survive the vaccination and aren’t turned into something from ’28 Days Later’ or a George A. Romero movie.

Rothschild plan to marry superfluous daughters into the families of influential Gentiles.

Cultural and Racial Organizations in Britain