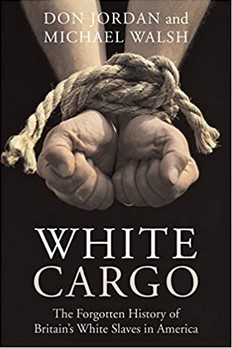 The forgotten story of the thousands of white Britons who lived and died in bondage in Britain’s American coloniesIn the seventeenth and eighteenth centuries, more than 300,000 white people were shipped to America as slaves. Urchins were swept up from London’s streets to labor in the tobacco fields, where life expectancy was no more than two years. Brothels were raided to provide “breeders” for Virginia. Hopeful migrants were duped into signing as indentured servants, unaware they would become personal property who could be bought, sold, and even gambled away. Transported convicts were paraded for sale like livestock.Drawing on letters crying for help, diaries, and court and government archives, Don Jordan and Michael Walsh demonstrate that the brutalities usually associated with black slavery alone were perpetrated on whites throughout British rule. The trade ended with American independence, but the British still tried to sell convicts in their former colonies, which prompted one of the most audacious plots in Anglo-American history.This is a saga of exploration and cruelty spanning 170 years that has been submerged under the overwhelming memory of black slavery. White Cargo brings the brutal, uncomfortable story to the surface.

Indentured servitude in British America was the prominent system of labor in British American colonies until it was eventually overcome by slavery.[1] During its time, the system was so prominent that more than half of all immigrants to British colonies south of New England were white servants, and that nearly half of total white immigration to the Thirteen Colonies came under indenture.[2] By the beginning of the American Revolutionary War in 1775, only 2 to 3 percent of the colonial labor force was composed of indentured servants.[3]

The consensus view among economic historians and economists is that indentured servitude became popular in the Thirteen Colonies in the seventeenth century because of a large demand for labor there, coupled with labor surpluses in Europe and high costs of transatlantic transportation beyond the means of European workers.[4][5] Between the 1630s and the American Revolution, one-half to two-thirds of white immigrants to the Thirteen Colonies arrived under indentures.[6] Half a million Europeans, mostly young men, also went to the Caribbean under indenture to work on plantations. Most indentures were voluntary, although some people were tricked or coerced into them.[7] A debt peonage system similar to indenture was also used in southern New England and Long Island to control and assimilate Native Americans from the 1600s through the American Revolution.[8]

Indentured servitude continued in North America into the early 20th century, but the number of indentured servants declined over time.[9] Although experts do not agree on the causes of the decline, possible factors for the American colonies include changes in the labor market and the legal system that made it cheaper and less risky for an employer to hire African slave labor or paid employees, or made indentures unlawful; increased affordability of travel to North America that made immigrants less likely to rely on indentures to pay travel costs; and effects of the American Revolution, particularly on immigration from Britain. In the Caribbean, the number of indentured servants from Europe began to decline in the 17th century as Europeans became aware of the cruelty of plantation masters and the high death rate of servants, largely due to tropical disease.[10] After the British Empire ended slavery in 1833, plantation owners returned to indentured servitude for labor, with most servants coming from India,[11] until the British government prohibited the practice in 1917.