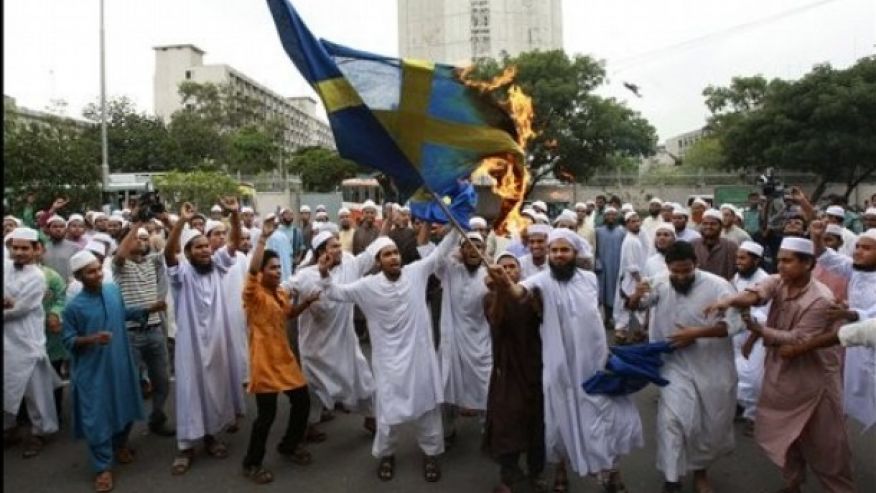 "Twice before in history, at Tours and then at the Gates of Vienna, European civilization was almost lost to the forces of Islam.  We are at a third great inflection point. Switzerland may be playing the role of Charles Martel. Stay tuned."

A group of third world Muslims burning the Swedish flag (pictured right) shows Sweden is becoming an Islamic Extremist state and has, in recent years experienced its first suicide bomber and a vast increase in rape and numerous attacks on the Jewish community within Sweden.

Muslim refugees and the cost of Sweden's kindness

The United Nations are breaking their own laws by promoting third world illegal immigration into Europe and is deliberately destroying the indigenous people of Europe by destroying their nations, their culture, and traditions.  The UN should be taken to court for breaking the Genocide and Indigenous laws that they formed!

On top of their practice of genocide, they are also inherently racist and are persecuting Europeans who protest against the invasion and destruction of their people and country.  All European countries who support the United Nations are also breaking these laws, meaning there is really no legal Government in Europe who represent the indigenous people of Europe.  We need to start forming strong community-based frameworks with National and World Congresses to give our people a fighting chance to stop this genocide.

There are many Europeans who identify themselves as Jewish and are absolutely against European countries being destroyed by third world illegal immigration.  You will find some of their members are out there protesting with the rest of the European community against it.  Many do not realize there are false European Jews, along with traitor gentiles, purposefully practicing a form of Eugenics with the express purpose to destroy Europe and replace the population with a mixed racial group.  It is called the Coudenhove-Kalergi plan.

"The man of the future will be of mixed race. The races and classes of today will gradually disappear due to the elimination of space, time, and prejudice. The Eurasian-negroid race of the future, similar in appearance to the Ancient Egyptians, will replace the diversity of peoples and the diversity of individuals. Instead of destroying European Judaism, Europe, against her will, refined and educated this people, driving them to their future status as a leading nation through this artificial evolutionary process. It’s not surprising that the people that escaped from the Ghetto-Prison, became the spiritual nobility of Europe. Thus, the compassionate care given by Europe created a new breed of aristocrats. This happened when the European feudal aristocracy crashed because of the emancipation of the Jews"  —   Richard Coudenhove Kalergi

The anti-Semitic Zionist, Globalist and gentile traitors who control political parties and the media in Europe, are using the same technique they used during World War II with Adolf Hitler's persecution of Jews in order to force them to flee back to Israel.  In Europe, at the moment, there are riots and violence, Rape and criminal activity is skyrocketing due to the large influx of economic migrant invasion and many Jews now fear for their safety in previously harmonious societies.

For those Jews who are reading this article and love Europe, please campaign inside the Jewish organizations to change these genocidal policies being promoted by the World Jewish Congress and B'nai Brith, and join Europeans for the survival of Europe.  Once Europe is gone, it is gone forever.

If you are Jewish and you promote the genocide of Europeans, just remember when the Europeans are gone and you are left surrounded by Muslim states, your 'Greater Israel Project' will soon become meaningless.  The Jewish population will eventually intermarry, and all these mixed racial groups with the European Jew will disappear from the face of the earth.  It is not a matter of 'if', it's only a matter of 'when'.  What you see today is the second Jewish holocaust, which you yourselves have caused, and it will be the last one.  When they revolt against your future generations, do not expect any mercy.

As Europe takes in migrants, Israel tries to keep them out

“The Jewish community, both in Germany and world-wide, welcomes this evolution towards an open society. It is the right thing.”

You only have to look back 10-12 months ago to find mainstream media had numerous reports and videos of ISIS members threatening an invasion into Europe, with half a million of their members.  Now Europe is in the midst of a migration crisis and the majority of governments and media, for some reason, do not seem to see any link.  There are very few reports which reference back to these chilling plans, even though you can see chaos in virtually every European nation today.

The anti-Semitic Zionist and traitor gentiles are backing ISIS to destroy the Middle Eastern countries of Syria, Iraq and eventually Iran, Egypt, and Lebanon.  They are financing and training ISIS, trying to give the impression they are only helping moderate terrorists in order to destroy the Middle East for the benefit of Zionist Israel and to encourage Muslims in large numbers to move into Western countries like Australia, United States, and Europe.  This is to destroy Christianity and the European people.  They are also using ISIS in North Africa to destroy African countries and once Europe is gone, they will use this figurehead to destroy the rest of the world.

ISIS threatens to send 500,000 migrants to Europe as a 'psychological weapon' in chilling echo of Gaddafi's prophecy that the Mediterranean 'will become a sea of chaos'

Does this ISIS threat explain the current refugee crisis?

Sweden is now the RAPE capital of the West.

"In 1975, the Swedish parliament unanimously decided to change the former homogeneous Sweden into a multicultural country. Forty years later the dramatic consequences of this experiment emerge: violent crime has increased by 300%."

Islamic Republic of Sweden:  Leftist parliamentarians and Muslims call for "slaughter of Jews"

Warnings:  Sweden is Headed Toward "a Cliff"...

Addressing an expo in Nuremberg on October 14, Brandl warned that untrammeled migration will entail heavy costs for German taxpayers and may also lead to social unrest.  He said:

"A four-member refugee family receives up to 1,200 Euros per month in transfer payments. Plus accommodation and meals. Now go to an unemployed German family man who has worked maybe 30 years, and now with his family receives only marginally more. These people are asking us whether we politicians really see this as fair and just."

"The high influx of people from other parts of the world will lead to the instability of our country. By allowing this mass migration, we are producing extremists. Mainstream society is radicalizing because the majority does not want migration, which is being forced by the political elites. In the future, many Germans will turn away from the constitutional state."

The Effects of Recent Immigration in Germany

Norwegian residents have been stunned by the violent crime rate plummeting in so rapid a time frame since strict deportation began in 2014.  Even though the liberal media tries to hush up the reason, one resident, Adrian Stavig, made it clear why the people love their new conservative political leader, saying:

“The world’s largest gang of thugs, murderers, and rapists is masquerading as a religion of peace.”

Dutch mayor to Muslim immigrants:  If you don’t like democracy, ‘f— off!’

Bed, board, and deportation in the Netherlands

Quote from Victor Orban, the President of Hungary:

"For us today, what is at stake is Europe, the lifestyle of European citizens, European values, the survival or disappearance of European nations, and more precisely formulated, their transformation beyond recognition. Today, the question is not merely in what kind of a Europe we would like to live, but whether everything we understand as Europe will exist at all.”

Non-white Invader Centers Being Burned Down at Rate of 1 per Day, Police Confirm

"The Syrian government sells passports and birth certificates at affordable prices. Many migrants have no passport, no ID, and refuse to give fingerprints."