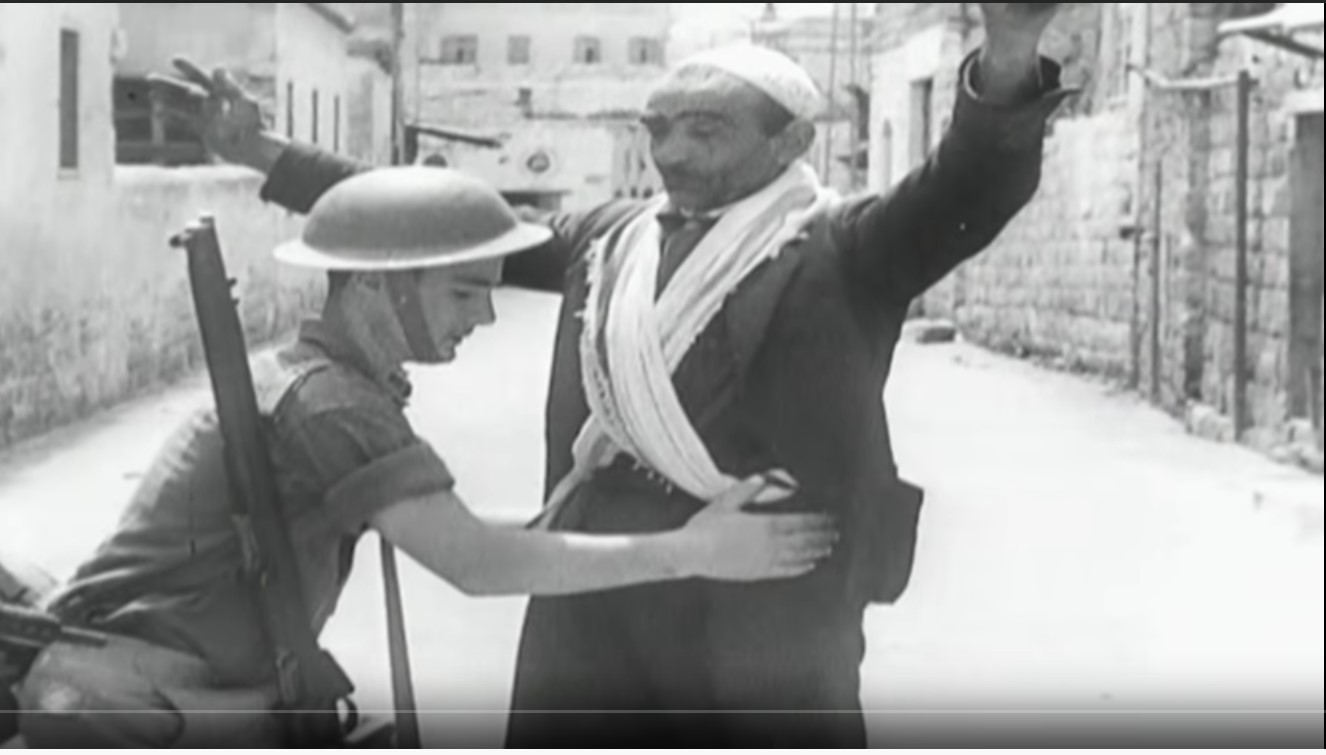 Free Palestine
In 1917 the UK government announced the "Belfour Declaration' to 'Lord Rothchild where they state they will flood immigrants into 'PALESTINE' to replace my people. From 1947-1949 over 520 Palestinian villages were removed and my family was placed in camps around Bethlehem, Palestine, where they still are today. At the time most Palestinians were farmers who couldn't read or write. I do believe all of what happened to my people, is part of a bigger agenda. I see the farmers being removed from their land all over the planet and it reminds me of Bethlehem last century and what happened to my people. I want a Constitution for Palestine. I want all of us refugees to return and vote to decide our own destiny. To have freedom, democracy, a 1st and 2nd amendment voting and FREEDOM.

Uncovering shocking foreign office communications and using fascinating footage never seen on television before, this documentary shows how British double-dealing during the First World War ignited the conflict between Arabs and Jews in the Middle East. This is a story of intrigue among rival empires; of misguided strategies; and of how conflicting promises to Arabs and Jews created a legacy of bloodshed which determined the fate of the Middle East. Avi Shlaim, Professor of International Relations at Oxford University, calls it 'one of the best historical documentaries on the Middle East I have ever seen'.

Greg Camp 2 years ago
Palestine was named by the Romans after the Philistine people.

Joseph Schneider 4 months ago
When Britain made rhe Balfour Declaration, the Jewish leaders assumed that Britain would resettle the Arabs from Palestine to another location. Britain didnt do so and thus has laid the foundation of future conflicts. The Balfour Declaration stated that "Britain would look.favoural " on the creation ove a Jewish state in Palestine. Note the verb "look favourably" The BD implies that Britain would allow a Jewish state to be established , she would not be actively involved. By the way the Romans changed the name of Judea to Palestine. So Palestine is not an imvented country.

passion Foxy 2 months ago
Remember what happened to Cyprus in the early 70's when Britain walked away and what did the Turks do? They invaded then the Greeks and Cypriots had to clean up the mess with Turkey taking half the island YET the British have the nerve to talk about world peace totally ignoring and forgetting their own history of creating dirt and wars in other nations NOT forgetting what they did to the polish in WW2 after making deal with the Russians and the Americans...... Aussie Looch

The Last Black Man Alive 5 months ago
George Friedmann in his book, The End of the Jewish People, pointedly states that the Europeans claiming to be Jews, are nothing more then "Hebrew speaking Gentiles."

KatynMermaid 187 6 months ago
1:34 concerning why the British promised the land to the Jews: https://youtu.be/HhFRGDyX48c

Alan Deacon 7 months ago
... Conveniently forgot to mention that the Balfour Declaration was addressed to Lord Rothschild... A home for the banksters!!

Zena Fanom 3 months ago
HELLO. After the Bar-Kochba Revolt of 132-136 CE, the Roman emperor Hadrian renamed the region Syria-Palaestina to punish the Jewish people for their insurrection (by naming it after their two traditional enemies, the Syrians and the Philistines. THERE IS NO PALESTINE PEOPLE BEFORE 1967. YOU FELL FOR THE LIES OF EGYPTIAN YASSER ARAFAT AFTER THE 1967 WAR. SHAME.

missatrebor 7 months ago (edited)
Finally a well made documentary on the betrayals and double dealings of the imperialist British empire in the Middle East until they finally moved out of there. Greed for power and money (oil) motivated them to behave as they did during the first half of the 20th century in the Middle East. Breaking promises one after the other to the Jews (and the Arabs, the French, the Russians etc.), cohorting with the Mufti Huseini, antisemitism, the creation of Iraq (again oil!). They have behaved abominably not only in the Middle East, (but also in Africa and India a.o.) so why the British are always characterised as fair players is totally beyond me! Antisemitism has existed for centuries all over the world, but the British most certainly poured oil on the fire after the end of WWI in the Middle East.

sally forth 2 months ago
17:05 what the British wanted was the oil of Iraq, and a route to transport it ( Suez canal)...

BYJOB 1 month ago
Britain's betrayal when oil was discovered, after creating 24 new Arab states that never existed before: • “The original text of the Balfour Declaration had read “Palestine should be reconstituted as the National Home of the Jewish people.” The text was changed to read “the establishment in Palestine of a Home for the Jewish people.” The single word “in” was used subsequently to justify removing all of Transjordan from the British Mandate that resulted from the Balfour Declaration. - [President of Israel, Chaim Weizmann, Trial and Error, 1949, p 257] https://amzn.to/2XCR3DH

Fouad M 6 months ago (edited)
Being desperate towards the end of WW1 Britain signed the 1917 Balfour declaration with the World Zionists Congress promising PALISTINE in return for THEIR. To keep that promise but had to betray the Arabs after they helped push out the Ottoman's. So we currently have 6 million Palistinian refugee's around the middle East

Allyssa Ibanez 2 years ago
Brits make the world unstable history will tell for themselves they pretend that they are good but the truth they are world wealth snatcher from all kinds of minerals ,diamond ,gold,silver,nickel,iron and oil

Bonnie Hundley 1 year ago
According to this documentary the true mess-maker was Imperial Britain. Plenty of double dealing. Got it. What a mess!

Fouad M 6 months ago
This is a classic case of divide and conquer. Spreading Arab and Turkish nationalism in the Ottoman Empire = BINGO

Usmaan Zabair 2 years ago
Sad how the majority of the British population is absolutely clueless as to what led to the situation we now see in the middle East. Britain caused it yet Britain will take zero responsibility.

Clarrisani ‍ 2 years ago
45:56 wait, is that the Jewish settlement of Tel Aviv, or the city of Jaffa? Because Tel Aviv was only a small settlement on the borders of Jaffa until the city was seized by the Zionists in 1948 and they renamed the city to Tel Aviv.

Robert Simms 7 months ago
History is written by the victors. How many history books need revising after enough passage of time for a 'neutral' to correct it?

LiddieJane 1 year ago (edited)
The Zionists and the British Imperial policies all colluded to create the mess and this slicing and dicing of the Ottoman Empire and writing the Balfour Declaration which was public with hidden treaties otherwise, are the roots of all conflict today. They say the spots of a leopard do not change. Britain and Zionists are NOT our allies today. Nor are they allies amongst themselves. Think George Soros , a Zionist. Who is he an ally to? Banking systems. The Artificial Intelligence technologies for banking systems is being bought lock stock and barrel by the Zionist now based as planned in Israel.The stage of our Biblical end times was set in these decisions. Israel is home to God's chosen. Zionists are not representative of God's chosen. The west fails to understand this. They are of the Antichrist and are making Israel the third temple. The Zionists plan to destroy the Dome mosque and blame it on the extremist muslims. The Temple committee is not run by rabbis, but Zionists. The Jewish Rabbis believe that the Messiah will build their third temple. And indeed Jesus does bring down a New Jerusalem as the temple when He returns. But the desire for a temple now will direct their steps. The Bible tells us two thirds of the Jews will be killed in Israel and perhaps world wide in the next all out war. The Zionists are of the spirit of the Antichrist just as assuredly as the Zionist fund our politics in America and get us to fight their wars and have impacted the Christian doctrine with false doctrine such as the pre-tribulation rapture using the ambitions of Cyrus Scoffield and the New York Lotus elite Club for writers. The Scoffield Bible commentaries have a huge hold on doctrine today. And it was planned, plotted and implemented by Zionists. There is a guide written in 1917, or rather a Zionists playbook that is still followed to take over the financial part of the world. So far it is working. They hate Trump because he knocking out the pillars these Zionists have built which support their efforts to control America. Oddly, Putin detests the Zionists and has a standing warrant out for Soros. We are truly the last generation as Jesus said in Mathew 24. And it began with the facts stated in this documentary film. The stage is set for a one world banking system to control our buying and selling through the Mark of the Beast as the Bible mentions. Trump is being directed by God to protect America and we better help him do so. Netanjahu in April 2018 announced to the Jewish Conference that Israel is ready to offer the world absolute security from identity theft in banking and can protect the world. Indeed banks are adopting Israeli technologies and all kinds of Israeli chips are appearing on ALL bankcards, a global banking chip and cells, smart anything. Implants next? Hand or forehead?

The Process: Will the Palestine/Israel Conflict Ever End? (Global Documentary) | Real Stories

The Israel-Palestine conflict: a brief, simple history
Read 2293 times Last modified on Saturday, 17 December 2022 10:25
Tagged under
back to top