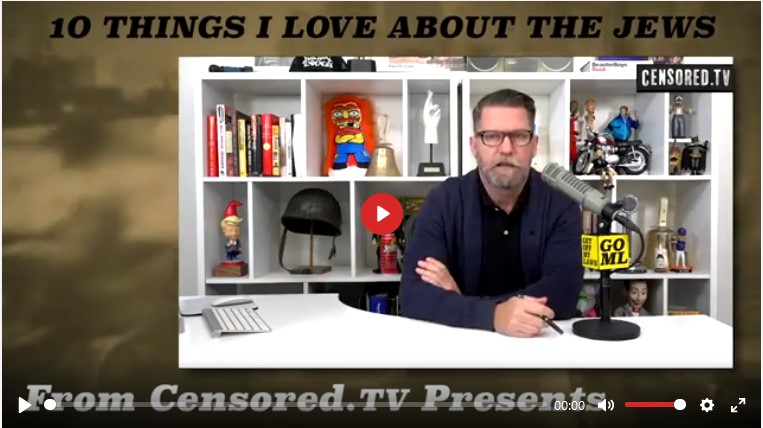 A few years ago, I made a satirical video called “10 Things I Hate About the Jews.” It was ultimately about self-hating Israelis who oppose their wall and despise Trump and don’t seem to get that Christians and Jews have the same end game.

A few things to not love about the Jews

The absurd notion that Jews were chosen by God.

The criminal state if Israel

The constant kvetching, about 'white privilege' and their holy holocaust religion

The Jews pushing for wars for profits

The wars waged for Israel

The brainwashing and sordid filth pumped out by Jew run Media

The pandering to useful idiots, blacks, Muslims etc, who can be used against other Goyim

The 'hate-speech' legislation hypocritically used only against the Goyim

The constant promotion by Jews, of 'Marxism' 'Communism' 'feminism' 'progressivism' and 'liberalism' and other 'ism's'

The constant promotion by Jews of abortion

The Jews pathological hatred of Christianity

The absurd notion that the swindling, immoral, deceptive and vile Jews has anything good to teach their host cultures

The conspicuous trail of corpses, lies, plunder and injustice left by Jews throughout history

The statistically high levels of mental illness found among Jews

The absurd Jewish belief that the world needs fixing and that they of all people are chosen to fix it.

The open theft of Palestinian lands, the ghettoisation and persecution of non-Jews under Jewish power

The role of the Jew in the history of slavery