Both women were sexually abused as babies.

Home | UW | Archives | Reference | Contact |
An Oasis for the Awake

There is a Greek saying that a fish rots from its head downward.

If this article is correct, then our political leadership is far more rotten than we can ever conceive.

Warning: These accusations that Presidents sexually exploit children will cause cognitive dissonance. But the idea is consistent with the notion that our "leaders" are depraved Satanists who are blackmailed.


Two women tortured, brainwashed and prostituted by the Illuminati paint a disturbing picture of how the world is really run. Both say they were prostituted to world leaders as children. They are Brice Taylor, author of Thanks for the Memories (1999) and Cathy O'Brien (with Mark Phillips) author of Trance-Formation of America (1995).

These books are consistent and confirm the revelations of Illuminati programmer "Svali" ("Illuminati Defector Details Pervasive Conspiracy.") If you want to understand the world, you must read these three women.

Essentially every country is run by a shadow government, which owes its loyalty to the New World Order controlled by a 13-member Illuminati Council.

According to Svali, "each ruler represents an area of Europe held under its sway; and each one represents an ancient dynastic bloodline." American leaders are often direct descendants, whether legitimate or illegitimate.

According to Taylor, whose real name is Sue Ford, Henry Kissinger is the CEO of the Illuminati who naturally prefer to remain in the shadows. Our political leaders are chosen by their moral frailties, blackmail-ability, and willingness to advance the Illuminati plan. Strings are pulled and they mysteriously rise to prominence. It doesn't matter which party they belong to. They secretly serve the "Cause."

Many are products of a life that may include pedophilia, drugs, child pornography, bestiality, mind control, rape, torture, satanic rituals and human sacrifices. They are given many opportunities to indulge their vices, which ensures continued obedience and solidarity.

Drug trafficking, white slavery, prostitution and pornography finance secret New World Order programs. Elements of the CIA, FBI, Coast Guard, Military, and police are all involved, as is the Mafia.

This information may upset or enrage some people. I could not bring myself to read these books for over two years. The torture and depravity they describe is excruciating. My mental filters would not accept it. Writing about it is difficult. The public has a child-like trust in its leaders, especially Presidents. The charge that they really belong to a sadistic, criminal, traitorous syndicate is a betrayal on the scale of incest.

We respond with denial and anger. We don't want to admit that we are dupes and our perception of reality is false. Dumbed down, we are incapable of common sense and concerted action. We refuse to contemplate what they may have in store. Better to ridicule the messenger and change the channel.

These women could have remained silent and found some much-deserved peace and happiness. Instead, they are taking great risks to warn humanity of the danger. Are we going to listen?

Both Cathy O'Brien and Brice Taylor were victims of the CIA's MK-Ultra mind control program, which is designed to create human robots to serve functions ranging from prostitutes to couriers to killers.

Their families belong to secret satanic sects that sexually abuse their children generation after generation to produce the trauma which causes multiple personality disorder. In this traumatized condition the mind splinters into many compartments. Victims exhibit extraordinary powers of recollection and endurance and can be easily programmed to do anything.

Society is being subjected to the same type of trauma-based programming using constant war and atrocities that include Auschwitz, Hiroshima, the Kennedy assassinations, Sept. 11 and Abu Ghraib. We are being collectively desensitized on the one hand, and programmed to focus on sex, violence, trivia and empty social rituals on the other. 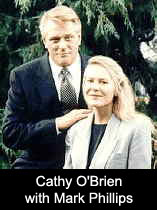 Both women were sexually abused as babies. Cathy O'Brien was often given her father's penis instead of a baby bottle. Congressman Gerald Ford, who was involved in drug trafficking and child pornography with the Michigan mob, initiated her into the MK Ultra Program. (No wonder Betty Ford drank.)

O'Brien's father prostituted her as a child to friends, business associates and politicians as a favor, or for money. She also appeared in numerous child pornography and bestiality films. When you read this book you will understand who Jon Benet Ramsay was and why there was no resolution to her murder.

O'Brien (born in 1957) says she serviced an array of politicians including the cocaine snorting Clintons (A Three-Way), Ronald Reagan, George H.W Bush, Dick Cheney, Pierre Trudeau, Brian Mulroney, Governors Lamar Alexander and Richard Thornburgh, Bill Bennett (author of The Book of Virtues), Senators Patrick Leahy, Robert Byrd (her handler) and Arlen Spector. Notable by their absence were Jimmy Carter and Richard Nixon. Taylor (born in 1951) slept with JFK and LBJ as a preteen and teenager.

When O'Brien's daughter Kelly was born in 1980, they often worked as a mother-daughter team. George H.W. Bush particularly liked Kelly. Cheney is not a pederast because his huge genitals horrify children. (195)

Referring to George Bush, Dick Cheney told her: "A Vice President is just that, an undercover agent taking control of the drug industry for the President." (158)

George Bush Jr. was present on one occasion but is not accused. (196) O'Brien was rescued by Mark Philips in 1988. It is likely that Bush Jr. is involved in this mind control, drug and sex scene. Rumors swirl around him and his behavior is erratic. Remember the pretzel incident? In 2003, Margie Schroedinger a woman who was suing the President for rape "committed suicide."

Sen. Robert Byrd, who controls the nation's purse strings, justified to Cathy his involvement in drug distribution, pornography and white slavery as a means of "gaining control of all illegal activity worldwide" to fund Black Budget covert activity that would "bring about world peace through world dominance and total control."

He said, "95% of the people want to be led by the 5%." Proof is that "the 95% do not want to know what really goes on in government." Byrd believed that mankind must take a "giant step in evolution through creating a superior race."

Byrd believed in "the annihilation of underprivileged nations and cultures" through genocide and genetic engineering to breed "the more gifted, the blonds of the world." (118)

O'Brien visited a series of secret paramilitary compounds throughout the US like one at Mount Shasta in California. "I learned that this not-so-secret military buildup consisted of special forces trained robotic soldiers, black unmarked helicopters, and top secret weaponry including electromagnetic mind control equipment."

At these compounds, O'Brien and her daughter were often hunted like wild animals, tortured and raped for the amusement of CIA, military and politicians.

O'Brien worked as a sex slave at Bohemian Grove, the elite's perversion playground on the Russian River in California. She says the place is wired for video in order to capture world leaders in compromising acts.

Strangely, mind controlled sex slaves are used as diplomats and lobbyists as well. At a Governor's Conference, Secretary of Education Bill Bennett advised O'Brien to "persuade these Governors at their weakest moment, bring them to their knees while you are on yours, and convince them that global education [the Education 2000 initiative] is the way to the future if there is to be any future at all." (173)

O'Brien's book is available directly from her. It is also available from Amazon.com (search Mark Phillips).

I don't have space to summarize Sue Ford's claims, which includes having sex with JFK.

Her book is online here. There are interviews with her here .

As the Kennedy assassination and 9-11 prove, the United States (and most countries) have been totally subverted by a Luciferian international criminal elite. The role of politicians, media and education is to keep the sheep deluded and distracted while the elite stealthily advances its goal of world tyranny. Western society today is a massive fraud.

It is tragic that brave young American soldiers have been brainwashed to believe they are advancing freedom when the opposite is the case. A reader tells me that this article is treason. Is it patriotic to obey traitors?

The populations of the West are spoiled, self-centered and complacent. How can things be so bad when we have so much? We don't realize that the goodies can be taken away in a second by tightening credit.

We don't realize that we are being distracted while our political and social institutions, our bulwarks against tyranny, are being infiltrated and dismantled. Our children are being brainwashed.

Don't ask, "What can we do?" That is conditioned helplessness. Figure it out yourself. Take responsibility. Send me your ideas. There is no quick fix to this mess. But we must stand up for truth. They may have the weapons of mass deception, but, as Cathy O'Brien says, "the truth doesn't go away."

See the video "Conspiracy of Silence" Illuminati Pedophiles in Washington

An Alternative VIEW of Tranceformation

This makes for grim reading. But if it's the truth, then it doesn't matter how ugly it is, its still a welcomed read.

You are right there is no 'quick fix' to this global problem. The problem is that there are too any ignorant or willfully ignorant people in this world, enslaved by things such as sex and money just as their Illuminati masters.

If people thought and were honest with themselves they would see that much in this modern world is essentially black or a con. Then naturally they would discuss this with their fellow man, who would likewise see things as improper, and then you could create a strong rebellion.

Unfortunately, this is not the case. Man has largely been made effeminate through feminism, and other means, and you cant have a resistance without men. And there is also the issue of false opposition, which is a massive problem towards any change.

You have websites like Infowars or LifeSiteNews that constantly push out articles to engage your emotions and get you worked up, but never provide you with concrete solutions.

Instead, they give you standardized movements like the 'truth movement' or the 'pro-life' movement to become apart of, which never get anywhere at all politically. And instead of inspiring desperation for change, they give you optimism that everything will be alright; all the while mankind is on the precipice of falling into Hell.

Thankfully there are websites such as Henrymakow.com that shows the world how it largely really is, and that there isn't much hope in the end of the day for large positive change. Sun Tzu wrote in the art of war,

"When you surround an army, leave an outlet free...

This does not mean that the enemy is to be allowed to escape...

it is to make him believe that there is a road to safety, and thus prevent his fighting with the courage of despair.'

This is what the Illuminati are doing to us with false opposition. Reading an article like this should inspire desperation in people and instead of being like the 3 monkeys 'see no evil etc..', we need to resist with courage. Even if its the courage born from desperation and despair, because we are up against quite a monster, even though its only lead by weak sex addicts and degenerates. 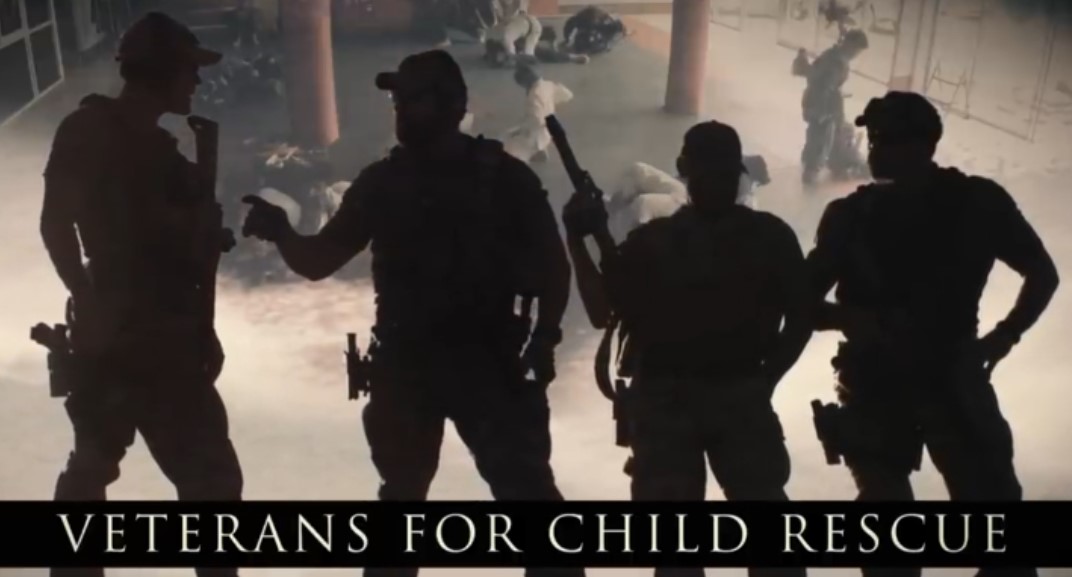 Child sex trafficking expose' documentary, Contraland, filmed by the Veterans of non-profit organization Veterans For Child Rescue. V4CR exposes the multi-billion dollar industry of child sex trafficking, alerting the populace on the epidemic and how you can empower and safeguard all children.