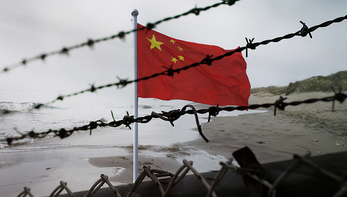 Mainstream media doesn’t care about Black people anymore, it’s all about Asians now, or have you not noticed? Asian bashing is all over the news in every country.
Yolk TV: Jews Control New Woke Asian Media Initiative

The enterprise, which calls itself “Yolk.tv,” claims to be the “uninhibited, authentic expression of Asian American identity…”

While there appear to be some Asians working for Yolk as low level writers, its most important positions are occupied by Jews.

The publication’s editor-in-chief is listed as Heather Lowenthal, a Seattle-based video producer at Parallel Productions, Inc, who does not appear to have any Asian ancestry.

The money behind the operation is being handled by their Chief Business Development Officer (CBDO) Ben Press, a Hollywood mover and shaker and Democratic Party fundraiser who serves on the Committee of the Jewish Museum in Los Angeles.

Two “LGBT” activists, Francine Strickwerda and Tracy Dethlefs — neither of them Asian — also appear to be playing an important role at the venture. On his social media page, Dethlefs repeatedly references his adopted Asian child and promotes the discredited conspiracy theory that Trump-inspired white domestic terrorists are behind the rash of violence against Asians.

Many Asians, such as commentator Vanessa Chan, have expressed confusion over “white” people seeking to control what Asians think, how they vote and what they consume. “I see the whites are still doing stuff like this in the year of our lord,” wrote Chan, conflating Jews for Gentile Europeans.

Wealthy Jews are by and large in charge of most major media aimed at minority groups. Univision, America’s most popular Spanish-language television channel, is controlled by Israeli billionaire Haim Saban.

Black Entertainment Television (BET) is owned by ViacomCBS, which is chaired by Shari Redstone, who inherited the company from her late father Sumner.

While Yolk.tv has yet to produce anything yet, its editorial line is not hard to predict.

Mainstream media doesn’t care about Black people anymore, it’s all about Asians now, or have you not noticed? Asian bashing is all over the news, like all of a sudden every American, White or Black, is now responsible for thousands of “Asian-American Attacks…” happening everywhere, in every major city of the hate-filled USA (it’s all staged). Where is the ALM (Asian Lives Matter) brigade, to burn down the metropolitan cities, throw rocks through store windows and steal all the merchandise in the name of Asian equality in America?

You’ve seen the headlines, “Asian-American woman beaten in Manhattan … ” and “Hate Crimes on Asian Americans happening while bystanders just watch…” – Oh please, someone help! The headlines are racist all on their own, “Suspect caught on video attacking Asian woman with hammer in New York City.” Really?

The story goes that some psycho-Asian-hating freak walks around the city asking people to remove their masks, and if they’re Asian (whatever that means), then they get hit in the head with a hammer. You can’t make this stuff up. Google it and you’ll find about 1,000 fake stories of “Asian” hate crimes that all just happened recently.

And what does that even mean, to identify someone on a rough video feed as being “Asian?” Are they from Asia? Are you saying that if you can tell on video that the person has brown skin and slanted eyes, they’re classified as such? That’s extremely racist. Retraction and apology from ABC News is in order, and probably every other fake news outlet in America, while they’re at it.

You know India and Israel are “Asian” countries. Shouldn’t there be 1,000 more hate crimes recorded where violent racists all over America are beating down people from THOSE Asian countries too, as the “breaking news stories” on every local station? Now that wouldn’t be racist. So we ask the question. Why the huge charade of racist Asian-hating and Asian-sympathizing propaganda as of late? The answer is surprisingly quite simple.

It’s all just a set up for Americans to sympathize with all things “Asian,” but mainly the Chinese Communist Party and their takeover of America

Weren’t the race wars in America over the moment Sleepy Joe stole the election? Didn’t he promise all this violence would go away? Black on Black crime is never to be spoken of again. Black on White crime is all justified now, according to MSM and the libtards. Blacks killing White cops is all justified. Reparations!

But now, attention has all shifted to something much MORE important, and that is the tsunami of (fake) hate crimes being besieged on all Asian people by Blacks and Whites in America. But why?

Trump, the supposed white-supremacist dictator, is out of power, and now you have a half-Black-half-Asian woman who is the Vice-President of the USA, so how is it that we all hate all Asians? Didn’t we vote for a Black man for President, twice, just before all these race wars began? Oh the irony and stupidity of the MSM narratives to support the CCP. Wake up folks and smell the commie coffee brewing.

Watch for thousands more new false flag events/acts of abuse, verbal and physical assaults, against “Asians” in order to silence criticism of the CCP

Attention Jussie Smollett wanna-be’s, like AOC, sign up at Soros.scum for false flag events and get paid — cause we work for the CCP! If you get busted, we’ve got lots of US judges and DAs in our pocket too, so no worries. It’s time for all of America to stop hating Asians, because that’s been our massive problem for how long? A couple weeks? What happened to all those White on Black crimes? Not newsworthy enough right now?

You know, the CCP has a history of genocide, if you want to talk about real blatant hate crimes. In China, if you criticize the government, say, on social media, you get thrown in prison, without a trail or jury or lawyer or judge or anything, and they remove your organs one by one to sell on the black market. Should we all sympathize with that?

Should Americans sympathize with the CCP, even if these fake hate crimes in America were real? Do you know what the CCP does to the Uyghurs and other Turkic peoples, just for praying to God? They’re treated to slave labor, abuse, torture and horrific ways of dying. So if an “Asian” person (still not sure what that means) is being beaten on the streets of America by some white supremacist or BLM member, are we all supposed to bow down and pray to the CCP not to hate us for it?

Tune your internet frequency to Pandemic.news for updates on how to fight off the upcoming communist apocalypse.

An ethnic studies professor has argued that “white supremacy” is the real reason why blacks are attacking Asians.

Jennifer Ho, professor of Asian American Studies at the University of Colorado Boulder, published an article last month titled “White supremacy is the root of all race-related violence in the US.”

“When a Black person attacks an Asian person, the encounter is fueled perhaps by racism, but very specifically by white supremacy,” Ho writes. “White supremacy does not require a white person to perpetuate it.”

How is this the case? Ho says it’s because “white supremacy is an ideology, a pattern of values and beliefs that are ingrained in nearly every system and institution in the U.S.”

“The dehumanization of Asian people by U.S. society is driven by white supremacy and not by any Black person who may or may not hate Asians,” she writes.

Ho also adds that “white supremacist ideas of Chinese people being to blame for COVID-19” have caused the alleged increase anti-Asian attacks, even if many of them were perpetrated by non-whites.

In 2003 Jennifer Ho received her PhD in English from Boston University. Before joining the University of Colorado Boulder faculty she taught at the University of North Carolina at Chapel Hill from 2004 to 2019. Her Colorado.edu faculty page lists her research interests as follows: