The French constitution gives no racial rights to whites 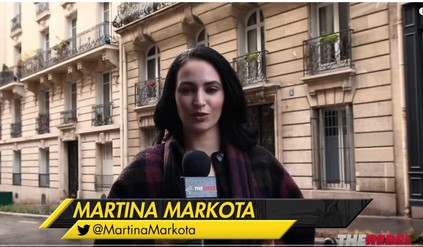 https://www.therebel.media/rebel-medi... Martina Markota of The Rebel.media reports on the filthy conditions migrants have brought to French markets and lawbreaking on Paris public transit.

I don't believe the word French "citizen" was used accurately in this video. There may be something politically skewed about this channel, with a possibility of twisting statistics, the numbers given are correct but the categories to which the numbers belong being fudged. For example, the population of France is 66 million today however not all these people are citizens and THEREFORE Article 1. of the Constitution does not apply to all residents, only to those who are citizens.

France shall be an indivisible, secular, democratic and social Republic. It shall ensure the equality of all citizens before the law, without distinction of origin, race or religion. It shall respect all beliefs. It shall be organised on a decentralised basis.

Statutes shall promote equal access by women and men to elective offices and posts as well as to position of professional and social responsibility.

The language of the Republic shall be French.

The national emblem shall be the blue, white and red tricolour flag.

The national anthem shall be La Marseillaise.

The maxim of the Republic shall be “Liberty, Equality, Fraternity”.

The principle of the Republic shall be: government of the people, by the people and for the people.

National sovereignty shall vest in the people, who shall exercise it through their representatives and by means of referendum.

No section of the people nor any individual may arrogate to itself, or to himself, the exercise thereof.

Suffrage may be direct or indirect as provided for by the Constitution. It shall always be universal, equal and secret.

All French citizens of either sex who have reached their majority and are in possession of their civil and political rights may vote as provided for by statute.

PREAMBLEWelcome to the english website of the French National Assembly

In the whole world White are the real minority. Europe is the land of White people and it is being stolen from us through forced mass migration. It must stop. Reverse migration must start.

The ban on statistics on ethnicity is astonishingly stupid French peculiarity. No reason for that.

The French have always been a level more stupid than the average for Europe.

All do respect but there is no such thing as color blind. an less you are suffer from daltonism. Funny thing about the leftists they bragging they are color blind but I can hear all the time people of color or multiculturalism.

We need reverse migration. France is not a multicultural-multiracial country but an invaded country. I was born in France a White country and I have seen my country vanish slowly before my eyes because politics have sold France to the Muslim world. War is already started in France, poor people and working class are at the front line of this war.

What about discrimination against whites? No one ever talks about that.

French culture will not survive without the ethnic French people. Prohibiting collection of statistics on this simply means that people aren't able to tell that they're getting replaced, they can't tell that they are having to pay for things so that invaders can use them and they can't tell that non natives have crime rates several times what they have. The French Revolution was a mistake as well.

I'll bet you they know how many CHILDREN they have.... How many men of military age.... They just want hide SPECIFICALLY how many muslims and africans they have... This is EXACTLY WHY so many people HATE the migrants... Any group you need to LIE and COVER for, is a terrible group.... People KNOW this....

That Article 1 says nothing about prohibiting the collection of information, any excuse not to try to identify problems and deal with them, typical wussy France.

France will be in 30 years...and Islamic Republic....but with nuclear weapons (like Paquistan) !!!

France and Europe is for White People!!! This is our home.......we Europeans need to stop the invasion!