In 2020, during the height of the covid fear, confusion and psychological operations, one company was utilizing their network and influence to steal your cell phone data in order to score you on your compliance to covid lockdown measures

PredictWise, a politically biased, Democrat backed company founded in 2017, openly claims on its website that it deployed its surveillance technology to turn “high-dimensional data covering over 100 million Americans into measures of adherence to Covid-19 restrictions during deep lockdown.”

Their technological capabilities are detailed in a white paper posted on their website that states that “predictwise data tracks the opinions, attitudes, and behaviors… of more than 260 million Americans through a mix of telemetry data… and survey data.”

In three separate use-case scenarios, PredictWise discusses how its cell phone surveillance technology primarily identifies and targets individuals that are most susceptible to progressive political messaging. Two of these cases involved a senate race in California and a supreme court justice seat in Ohio.

PredictWise claims that the Interventions they deployed were responsible for flipping these races from red to blue.

Looking at the leadership team, you can also see a very strong influence towards progressive and globalist agendas.

Their team consists of Greg Beswick, PredictWise’s “Head of Politics” who has served as Executive Director of the Ohio Democratic Party.

Jeff Quinn, the Head of Technology and Data Infrastructure, who reportedly has “a deep desire for progressive change.”

The other founder is David Mayer de Rothschild of the Rothschild banking family, youngest son of Sir Evelyn de Rothschild. PredictWise’s about page states that David “focuses on solving the most relevant applied questions including: mapping and updating public opinion” David is also prominently featured as a member on The World Economic Forum website.

The primary sources of Data that PredictWise uses is location data, survey data and telemetry data, which PredictWise characterizes as “passively sourced cell-phone data along with what type of media people are consuming and voter registration data.

In their white paper, PredictWise names one of its sources of data, Crate&Barrel, an American based retail company, along with other “credit sources”

PredictWise claims they used two separate categories to label people that they surveilled :

These two categories were

High levels of decree violations, which they noted as folks who were on the go more often than their neighbors, and

Low levels of decree violations, folks who mostly or always stayed at home

The white paper discusses how PredictWise targeted Republicans specifically who scored high or low on their measure of Covid-19 decree violations in the swing state of Ohio, and followed up by asking survey questions.

The language used in this use-case scenario is very noteworthy. It states:

“This measure derived from ground truth, real-time, ultra-granular location patterns that analyzed nearly 2 billion GPS pings for this study. PredictWise found that Republican non-movers’ (compliers) concern around Covid-19 and persuadability was almost as high as Democrats overall and Republican non-movers over the age of 65 were more concerned about Covid-19 than Democrats.”

This story was first reported by Tom parker at Reclaim The Net, which also contains links to several other articles they have written providing more information about this new wave of technological surveillance and privacy violations, including reporting on how “UK vaccine recipients were secretly surveilled”, how “Taiwan combined vaccine passports with digital ID numbers”, and how all of this “Covid surveillance tech remains open to exploitation”.

The implications of tech companies using our basic human activity data and weaponizing it against us in order to deliver targeted messaging to propagandize us and change our opinion is all the more reason for us to stay vigilant and continue to question everything.

Reporting for the Last American Vagabond, this is Scott Armstrong.

Who is funding Diversity? 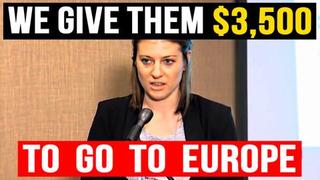 Who is funding Diversity?

What many of us have realized, we rarely or never had free speech. As many have attempted to voice such concerns on mainstream media, one would notice the information to be distorted, be out of context, lost, and never broadcasted. Today, there are countless political prisoners, and a few countries who are involved are Britain, Germany, and other European countries.

There are several cases we hear; people who are fighting against the globalist find themselves in either a mental institute or jail. This is just one of the many techniques they use to shut people up.

For people who would like to get involved and campaign for political prisoners, please contact Monika. The link is below.

The Rockefeller Brothers Fund (RBF) is committed to becoming an anti-racist, anti-sexist institution where each person, in their uniqueness, knows they are valued and belong. Diversity, equity, inclusion, and belonging are critical to our mission of advancing a more just, sustainable, and peaceful world.