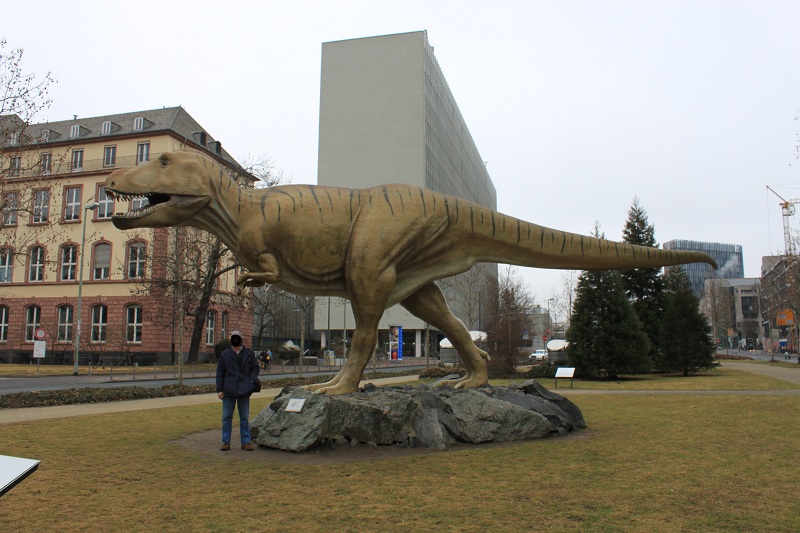 Many people do not believe in religion while others have religious beliefs to help guide them in life. Numerous articles in the Bible help guide people, whereas other articles are stories adapted from pre-christian beliefs. Many people and religions believe that God is the creator of all of the universe and beyond, that God made the planet, all its animals and humans. Many still have the outdated idea that the world was created in seven days. They also believe that humans existed side by side with dinosaurs such as the Tyrannosaurus Rex and that those creatures were vegan. This thought process does not hold up to scrutiny at all. It is a child's fairy tale.

There is very little chance that human beings could survive over a period of time in the same world as dinosaurs. No human being could outrun the dinosaur in the picture left. It would be almost impossible to hide due to their strong sense of smell. Perhaps a small nook and cranny could be a temporary hiding place. Human beings would have been prime pickings and would not have survived this planet with such a superior predator around.

This false Religious opinion is only that an opinion. There is absolutely no proof to uphold any creationist theory, there is insurmountable evidence in every corner of the globe that supports the gradual evolution of life on our planet. The last dinosaurs died out millions of years ago possibly from a meteorite that hit the earth. The sky and sunlight were blacked out for months by immense dust clouds and the majority of creatures that survived the actual blast itself died from starvation and incredibly cold temperatures that came after. There were some creatures that managed to survive and which comprise groups of animals that live on our world today.

Many modern minded people believe that God is the creator of all of the universe, the planet we live on, the sun, the moon, the bigbang and beyond. Where does the universe end? We will probably never know.
His divine plan has placed us in the exact place to support our life and that of our world. God made many different animals over millions of years and some animals died out such as the Dinosaurs. God did not make man and Dinosaurs at the same time. God did not just make one couple called Adam and Eve, God made many Adams and Eves all over the world and some died out, while others became modern humans, in which they comprised of White Europeans, Black Africans, and Chinese, etc and most of the world population are indigenous to regions of the world they live in today.