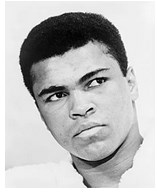 Many Muslims believe mixed marriages are a sin against God, and one man who spoke his mind on mixed relationships was African American born Cassius Clay, who converted to  Islam and changed his name to Muhammad Ali.   He frequently clashed with Jews and accusing them as Zionist who Dominating the world, even as some members of the Jewish community where his fervent admirers.  Ali spoke about the interracial relationship and was interviewed by Jewish BBC reporter Michael Parkinson in 1972.

Muhammad, the founder of Islam had a number of wives, including a Jewish wife who was a Middle Eastern Caucasian, therefore they were not mixed racial relationships.  Drawing the prophet: Islam’s hidden history of Muhammad images

Globalist Anti-Semitic Zionists have gained a lot of influence in the Media and in the Muslim community and some Jews have become Muslims, but are still Jews and they promote inter-racial marriage as acceptable because they wish to destroy the European Caucasian and Arab Caucasians through inter-racial marriages with third world people from Africa and Asia.

Muhammad Ali (pictured right) born in 1942 and died at 74 years is arguably one of the most renowned athletes in the world due to his great success as a heavyweight boxer.  He was also a devoted Muslim after discovering the religion in the 60s when he was introduced to the Black American Nation of Islam.  He officially converted to Islam in the 70s and was a man who stood by his convictions. Muhammad was banned from fighting after refusing to be conscripted during the Vietnam War on grounds of religious beliefs.

"We who follow the teachings of Elijah Muhammad (leader of the Nation of Islam) don't want to be forced to integrate. Integration is wrong. We don't want to live with the white man"

"No intelligent black man or black woman in his or her right black mind wants white boys and white girls coming to their homes to marry their black sons and daughters."

Muhammad Ali on the need for a separate black homeland:

"You got the white racists who believe in separation such as I believe: One day the black people of America must go to self, clean up self, help self, do for self. I recognize [the white racists]."

"Black and white are disagreeable with peace, they can't get along together… Worked 400 years, 16 hours a day from sun up to sun down, without a payday, and we should now be paid.  You got 50 states and we make up 10% of the population then divide up 10% of the land… Now that we're no longer slaves and we can't get along just let me go and live by myself."

Muhammad Ali on killing blacks for having relationships with whites:

In an interview with Playboy, Ali said:  "A black man should be killed if he's messing with a white woman."  When the interviewer asked about black women crossing the colour barrier, Ali responded:  "Then she dies – Kill her too."