Teachers Union In The United States 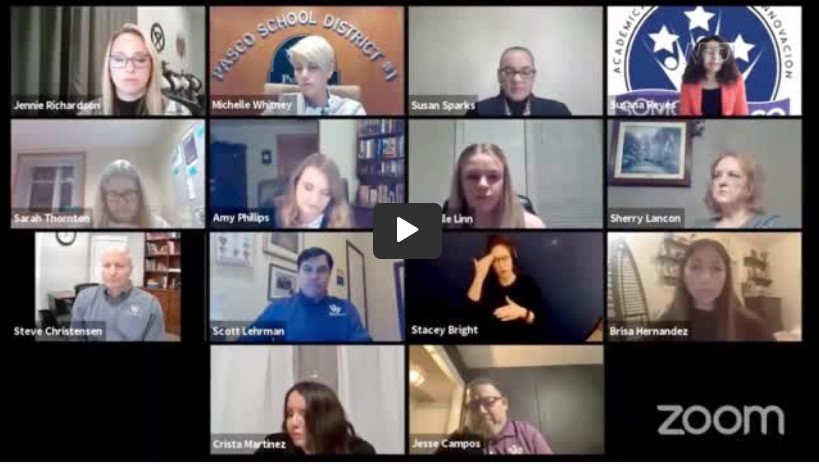 Teachers Union President Calls School Reopenings 'White Supremacy'
Rumble — Recent remarks from the president of a Washington state teachers union have led to public criticism. Despite warnings of #children’s mental #health, he said that opening schools is a form of white privilege and supremacy. 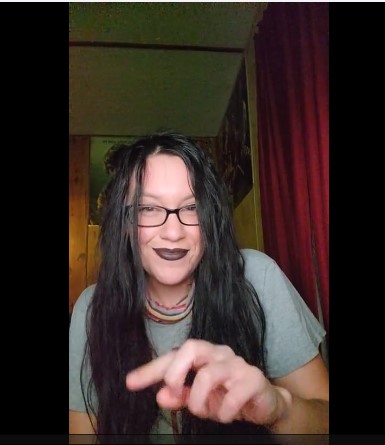 My experience with teachers union
Rumble — My personal experience being in the union. Not saying that NOBODY in the union cares about teachers...i mean as a whole.

Rabbi and labor leader get married 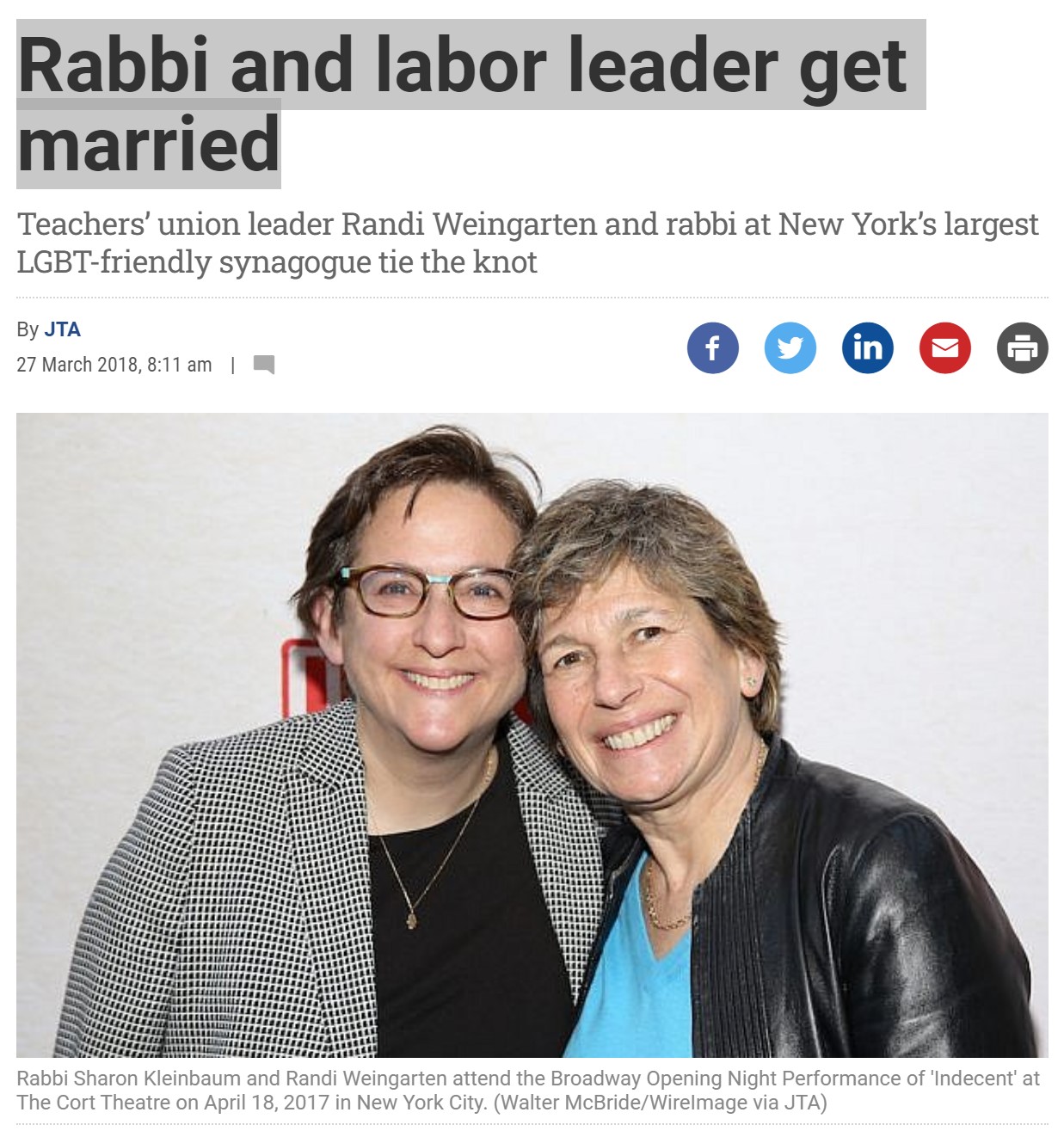 Randi Weingarten, who heads the national union for teachers, and Rabbi Sharon Kleinbaum of New York’s leading synagogue for LGBT Jews were married in New York.

Their union at a downtown Manhattan restaurant, La Marina, was featured in the Weddings section of The New York Times on Sunday, their wedding day.

Weingarten 60, is the president of the American Federation of Teachers, headquartered in Washington, DC. Kleinbaum, 58, is the senior rabbi of Congregation Beth Simhat Torah in New York, whose membership includes a significant number of lesbian, gay, bisexual and transgender congregants.

The couple first met in the mid-1990s, they told The Times.

“We were two lesbians in New York fighting for different things,” Weingarten said. “We liked each other. We had good banter. It wasn’t as if there were a lot of high-profile gay women who were active in leadership roles. I thought she was fun, witty and smart.”

In 2006, Kleinbaum asked Weingarten to speak at her congregation’s Gay Pride Shabbat service, which Weingarten called a turning point in how she saw herself as a lesbian.

Kleinbaum divorced in 2012 after an 18-year relationship and two daughters. The women soon began dating and later moved in together.

“We’re not spring chickens,” Kleinbaum told The Times. “We didn’t believe we would get this kind of love this late in our lives.”

Rhonda "Randi" Weingarten was born in 1957 in New York City, to a Jewish family, Gabriel and Edith (Appelbaum) Weingarten. Her father was an electrical engineer and her mother a teacher.[1][2] Weingarten grew up in Rockland County, New York, and attended Clarkstown High School North in New City, New York.[2] A congregant of Beth Simchat Torah synagogue, she considers herself a deeply religious Jew.[3][4]

Weingarten's interest in trade unions and political advocacy was formed during childhood. Her mother's union went on a seven-week strike when Weingarten was in the eleventh grade. Under New York state's Taylor Law, her mother could have been fired for taking part in a strike. Instead, she was fined two days' pay for every day she was on strike. Later that year, the school board cut $2 million from the budget. Weingarten and several other students convinced the school board to let them conduct a survey regarding the impact of the cuts. The survey led several school board members to change their minds, and rescind the cuts.[2]

From 1979 to 1980, Weingarten was a legislative assistant for the Labor Committee of the New York State Senate. She received a B.S. degree in labor relations from the ILR School at Cornell University in 1980 and a J.D. degree from the Yeshiva University Cardozo School of Law in 1983.[1]

Weingarten worked as a lawyer for the firm of Stroock & Stroock & Lavan from 1983 to 1986, where she handled several acrimonious arbitration cases on behalf of the UFT.[2] She was appointed an adjunct instructor at the Cardozo School of Law in 1986.[1] She also worked as an attorney in the real estate department of Wien Malkin and Bettex.

In 1986, Weingarten became counsel to Sandra Feldman, then-president of the UFT. Weingarten handled high-level grievances for the union. She was also lead counsel for the union in a number of lawsuits against New York City and the state of New York over school funding and school safety.[2][5] By the early 1990s, she was the union's primary negotiator in UFT contract negotiations. Her negotiating positions became more aggressive throughout the 1990s.[6][7]

From 1991 to 1997 she taught at Clara Barton High School in Crown Heights, Brooklyn. The classes she taught included Law, Ethical Issues in Medicine, AP Political Science, and US History and Government.[8] Her political science students competed in the We the People civics competition, winning the state championship in 1993-94 and 1994–95 and being fourth in the national championship in 1994–95. In 1995, Weingarten was elected Assistant Secretary of the UFT. She continued teaching per diem from 1995 to 1997.[9]

In 2003, Weingarten sold the UFT's headquarters at 260 Park Avenue South and two other buildings at 48 and 49 East 21st Street for $63.6 million and moved the union's offices to Lower Manhattan, purchasing a building at 50 Broadway for $53.75 million and leasing the building next to it, 52 Broadway, for 32 years. The UFT also financed a $40 million renovation of both buildings.[28]

https://www.foxnews.com/us/randi-weingarten-anti-semitism-jewish-union-critics
American Federation of Teachers President Randi Weingarten drew accusations of anti-Semitism after challenging Jewish Americans in a new interview. The controversy came in response to an interview ...

https://en.wikipedia.org/wiki/Randi_Weingarten
Early life. Rhonda "Randi" Weingarten was born in 1957 in New York City, to a Jewish family, Gabriel and Edith (Appelbaum) Weingarten.Her father was an electrical engineer and her mother a teacher. Weingarten grew up in Rockland County, New York, and attended Clarkstown High School North in New City, New York. A congregant of Beth Simchat Torah synagogue, she considers herself a deeply ...

https://meaww.com/randi-weingarten-teachers-union-president-defense-fund-bullied-crt-critical-race-theory-teachers-541855
Rhonda 'Randi' Weingarten, 63, is an American labor leader, attorney, and educator. Born and raised in New York in a Jewish family, developed her interest in labor unions and politics as a teenager when her mother—a teacher—went on strike.

https://www.breitbart.com/education/2021/04/07/randi-weingarten-tells-jews-not-to-criticize-teachers-unions-american-jews-are-now-part-of-the-ownership-class/
Apr 7, 2021American Federation of Teachers (AFT) president Randi Weingarten, who leads the nation's most powerful teachers' union, has a message for fellow Jews: they should not criticize the unions, because they are part of America's "ownership class."

https://www.americanthinker.com/articles/2021/04/when_a_jewish_teacher_union_bigwig_maliciously_scapegoats_jews.html
Randi Weingarten, leader of the AFT (American Federation of Teachers union) has made a malicious smear against the Jewish community that would normally be characterized as anti-Semitic, but it may ...

www.jewishledger.com/2021/04/union-leader-randi-weingarten-mixes-toxic-race-theory-with-antisemitism-to-justify-closed-schools/
Union leader Randi Weingarten mixes toxic race theory with antisemitism to justify closed schools ... Teachers have the power to inspire their students, open them up to new vistas of learning and ...

Randi Weingarten has strong words for Jews who say unions ...

https://www.jpost.com/diaspora/randi-weingarten-has-strong-words-for-jews-who-say-unions-are-an-obstacle-663912
Randi Weingarten has strong words for Jews who say unions are an obstacle American Federation of Teachers President Weingarten speaks on coronavirus and school closures.

Rabbi and labor leader get married | The Times of Israel