Whites build Motorcycle clubs all over the World for all Whites and develop an Anti-Defamation League to represent whites and all races. 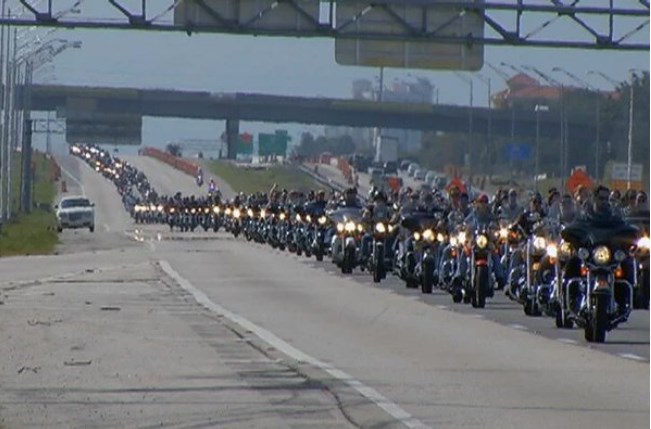 LET'S ROLL! Bikers for Trump roll into Wisconsin to keep George Soros-paid shills away from the Trump rallies:

What Is The Largest Motorcycle Club In The World? | Hexis Cyber

WASHINGTON - More than 100,000 flag-bearing bikers, many of them Vietnam veterans, throttled their engines Sunday for the annual “Rolling Thunder” ride through the U.S. capital as President Donald Trump vowed to keep the Memorial Day spectacle alive.

Spectators lined the route from the Pentagon to the National Mall to watch the growling parade of choppers, a leather-clad, red-white-and-blue tribute to American soldiers missing in the Vietnam War. Community, unity, and direction, these three ideals are strengths to congregate a group, and the globalists fear these types of ideals as it potentially creates the ability to form a large gathering of passionate individuals with an open mind.

The globalists push for absolute control with the Police pushing their laws, being the law enforcers they are to follow without question. A few years ago in Australia, the Australian government, introduced new laws regarding anti-bikie laws to covertly gain more control of the people, using outlaw bike organizations as a false flag excuse.

The majority of bikers in Australia are law obeying citizens, seeking community and a sense of freedom within a conformed society. As individuals, we share the fundamental passion for freedom and riding motorcycles is a small part of that, but we are also drawn to our clubs by our common faith and heritage. This momentum of energy will be directed to real-world issues, can you imagine that, for all the people worldwide to form motorcycle organizations and clubs under one world umbrella organization to fight for self-determination, free speech, and our rights and have the right to return to our own countries... These organizations will represent not only all the bikers, but also the people in the community, so remember who the real enemy is.

Below is a link showing a Jewish alliance motorcycle club.

Here is a link of all known motorcycle clubs, can you imagine all of them joining together to fight real-world issues and ignoring the pieties things such as personal gain such as greed and local power.

To build Motorcycle clubs all around the world under one umbrella congress, and develop an Anti-Defamation League to represent bikers and non-bikers globally. In this organization, they can make fair decisions to elect proper leaders to the governing body of the congress to truly represent the people.

In the United States, we have the "United Bikers for Trump", and they are in the hundreds of thousands. They consider themselves conservatives and they should aim to be nationalists as in history, as no conservative organization has ever been successful in the west. They should unite people together and promote the truth and history, so the path ahead is clear and moral. You can get nothing done if your members are ignorant and stubborn, by teaching people history and the truth; they become an Army, and "People with knowledge and the truth become very powerful, as knowledge is power". 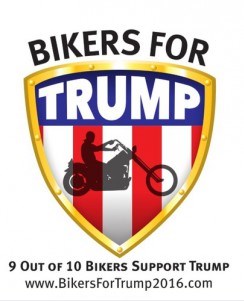 Thousands of Bikers For Trump Roll Into DC

Published on Jan 18, 2017
https://www.superstation95.com/index.... "Bikers for Trump" promised to "Protect the Inauguration" and they are making good on that promise. Tens-of-Thousands of Bikers are on the move today - Wednesday, January 18, 2017 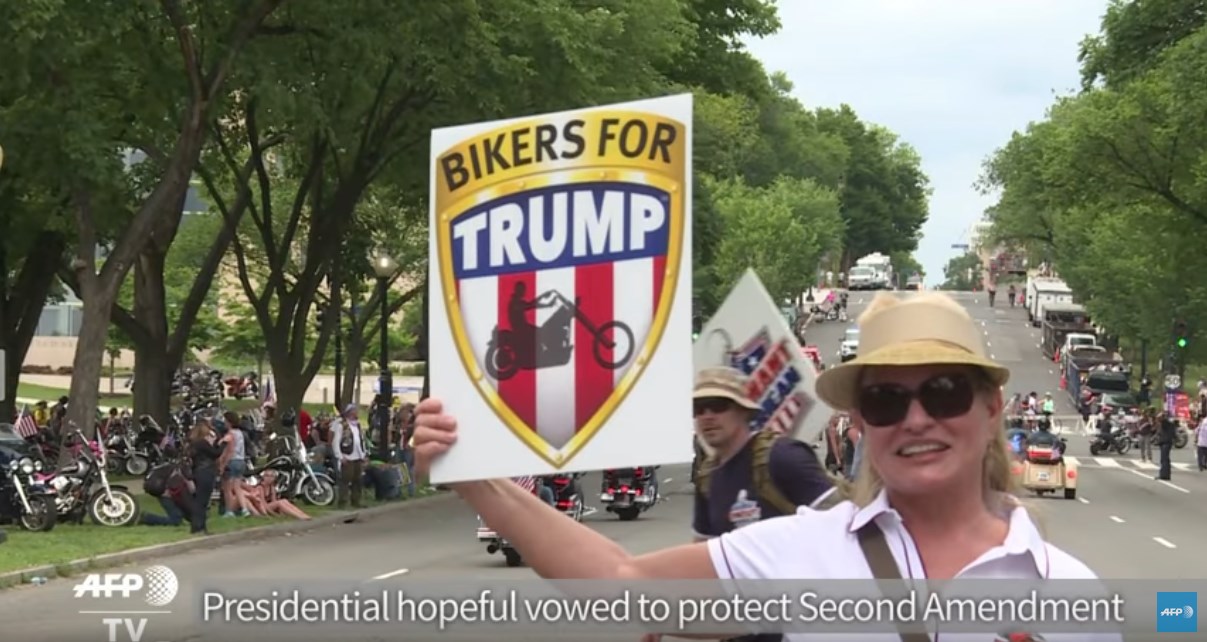 White House hopeful Donald Trump received a warm welcome Sunday as he addressed a motorcycle rally consisting of many military veterans in the US capital.

Chris Cox, founder of Bikers for Trump, is a scam artist that has duked his supporters out of nearly $180,000 in gofundme accounts, not to mention the money he has made from selling shirts with the trademarked logo owned by someone else. He claims to be doing this for veterans which a lot of them being Bikers. Well, Chris Cox is not a veteran. He wasn't even a biker... He bought his first Harley Bike this past November. Previously he would fly into an area and rent a bike. Since he wasn't a biker, he didn't know proper biker etiquette such as never leave a fellow biker stranded.... yes, he left a biker on the side of the road because he had a interview to go to... no excuse. He rode in rolling thunder, a demonstration ride for POW/MIA awareness in DC every year, well in this year he rode with his Bikers for Trump flag, a big no no... this ride is not for any personal political view or group other than the one for veterans of Vietnam. He wears the American flag in a retreating mode on the sleeve of his shirt. He has promised funds to a few groups and not given one penny to any. He has used his gofundme account money to enrich himself and himself only. He has bought a motorcycle, truck, trailer, motor home, and gifts for his family. He pays for his travels and lodging for himself and his family going to areas of the country only to promote his group for the purpose of increasing his donor base. He has never organized a ride that was to benefit any veteran. Never...He will however, pay for people like Jan Morgan to come speak with him by paying all their expenses. He relied on donations and venues offering him free use of their stage and sound system while talking to drinking Bikers...not spending any money. the rallys he has done only have a handful of people. He shows up to political venues as a speaker, talking to their supporters claiming he has many supporters he has under his control to back whomever he does... He claims that he has over 300,000 member while in fact he has only 300,000 likes on his Facebook account...
Chris Cox has been selling items at a higher cost than the real person who owns the trademark logo... he sells them at $28-30 while the other one sells them for $20... there is currently some legal filings in the process to shut him down. Chris Cox has even tried to trademark the slogan "Make America Great Again" and of course, was denied as he was on the logo. He claims to own it but fails to mentioned that he has been denied repeatedly by the federal department.
Chris Cox has been scamming for years. He talks like a politician,

Bikers for Trump disappeared when they were needed - any truth to this story? Read were Mr. Cox is a 'crisis actor' for Deep State - Pax Judaica....

The event that started the split up between Chris Cox and Casper/Bernie... the real issue between the founder vs the boots on the ground and logo designer... the real issue between the scam artist vs the real biker couple that rallied the bike community behind the cause... the fraud vs the heart and soul... the selfish liar vs honest good people... the real reason for the split up was all about money and power...
Chris Cox saw that he was losing control over his movement because he was concentrating too much on money while he was seeing Casper gaining popularity with the real bikers... at all the rallies, Casper was recruiting the real bikers while Cox could only get housewives and ppl that were not actual bikers... so much Cox was forced to get a motorcycle, something he didn’t have until then... because cox wasn’t a biker, least not a genuine one... he used the funds he got through donations that were supposedly for the rallies and eventually the one in DC at the inauguration.... instead of using shirt sales... he bought himself several stuff using donations and started flying around to make himself seen at certain events as being there... with only a few close ppl... he fooled ppl into thinking he was a leader of hundreds of thousands of members when in fact it was just FB followers... he would make sure he was seen... he would do everything he could to be in any video or photo...
but what was he actually doing for veterans... well, since he was not a veteran, he had no idea what veterans wanted... he main goal was to pass a bill that helped keep the veteran war monuments open in the event of a shutdown... wow, okay thanks... but how often will that be? I can plan my visit around that. While that might be helpful for a small group of elderly veterans that don’t have much time left, their organizers of groups that take them there could have made arrangements around any closures... so what else is he working for veterans... does he give any money to any of them? Nope... he has not given one penny. Has he really helped anyone out that was living on the streets, needed medical supplies etc that was a veteran or a biker... nope.
He has been in this whole thing just for money. He has never had a real job... never had a job like most of us where we clocked in... he has only been a chain saw artist and for a short time followed his dad around as a lobbyist in DC and made every effort to try and land a tv reality show as a chain saw artist... failing at them all, he saw a chance at something following his recognition as lawn mower man... and he latched on to veterans and bikers cause to that point he only had family and friends from his FB account... basically housewives and old ppl...
so... the text messages between chris Cox that started the division was about money... about the sell of shirts and patches... not about being treated with disrespect... he lied as usual. He lies more than any democratic politician... he exaggerates everything he does... here is just one of the texts where he was complaining that he was losing money cause ppl were buying more from Casper cause Casper was actually going to every event and recruiting ppl... so then the ppl were buying stuff from Casper and not Cox... Casper was using his own money to ride on his motorcycle and stay at cheap motels if not at a house that was opened up by gracious fellow bikers... he used his money while Cox used donations to fly around first class and stay at nice hotels and wine and dine at nice places rent motorcycles or borrow them and he even include a few trips to vacation at beaches etc with him, his mother brother girl friend etc...
he would show up, steal the publicity and make sure ppl saw him and give a speech... then run off with the money for himself. Not for the cause.. he would get Casper to ask for free stage time and free stuff so Cox would not have to pay. He hardly used any of it for the inauguration rally... so now he could use it for toys and paying himself a salary... that’s right, he is a LLC, not a 501c3 charity group... this guy is in it for money... that’s all