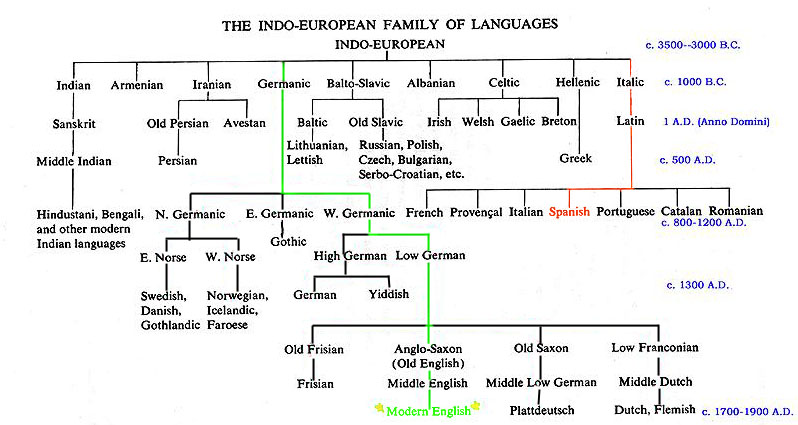 As long as people have been living in different regions of Europe, there would have been various languages and dialects spoken by the various population groups.  The earliest Europeans up to the Heidelberg people, and their ancestors would have had a very simple vocabulary compared to the language we use today.

Like today, there are English-speaking people who integrate into the culture and adopt the language of the country they have migrated to.  Some languages have also become rare while others have become extinct.  But as generations passed, the language became more complex with a larger vocabulary, passed on from generation to generation over thousands of years.

The Germanic tribes, Anglo- Saxons Europeans, moved into England and spoke the Germanic language, and over time, it changed, and today it called the  English language.  If you learn German you will find many words sound similar to English words.  Here are some words to give you an idea how the German language has changed in pronunciation and developed into English-language:

Indo-European Dispersals and the Eurasian Steppe with J.P. Mallory

Overview of the Indo-European Languages

" Marija Gimbutas had a detailed knowledge of the archaeology of prehistoric Europe and of the cultures of ‘Old Europe’ with their rich iconography of goddesses and gods, which she viewed as overwhelmed at the onset of the Bronze Age by the Kurgan invasion, an incursion of a new population from the East European steppe lands, north of the Black Sea. This she saw as the key impetus which brought Old Europe to an end, and which introduced to Europe a new population speaking early Indo-European languages."

We look at the history of the alphabet and some of the historical events and linguistic changes that have resulted in the complicated spelling system in English, from Viking & Norman invasions to the Great Vowel Shift and the printing press.

Why is English spelling so complicated?

Is English Really a Germanic Language?

Afrikaans: A Daughter Language of Dutch

Are Yiddish and Hebrew Similar?

History of the Alphabet

The  Basques white Europeans live in North-Central Spain. Basques are the most fiercely nationalist group in Europe.  The Basque population is divided into France and Spain in the border of those two countries, with each side using the official language (Spanish or French) for official business, but speaking Euzkera (the Basque language and the oldest language spoken in Europe, going back to Ice Age Europeans). The Basques communities have retaining a strong sense of identity in Europe and all over the World.

Basque - A Language of Mystery

Revenge of the Basques

" In this video, we explore the Latin language. We learn it history, how it shaped our language, and many other languages, its role in the Roman Empire, how it changed through time, and more."