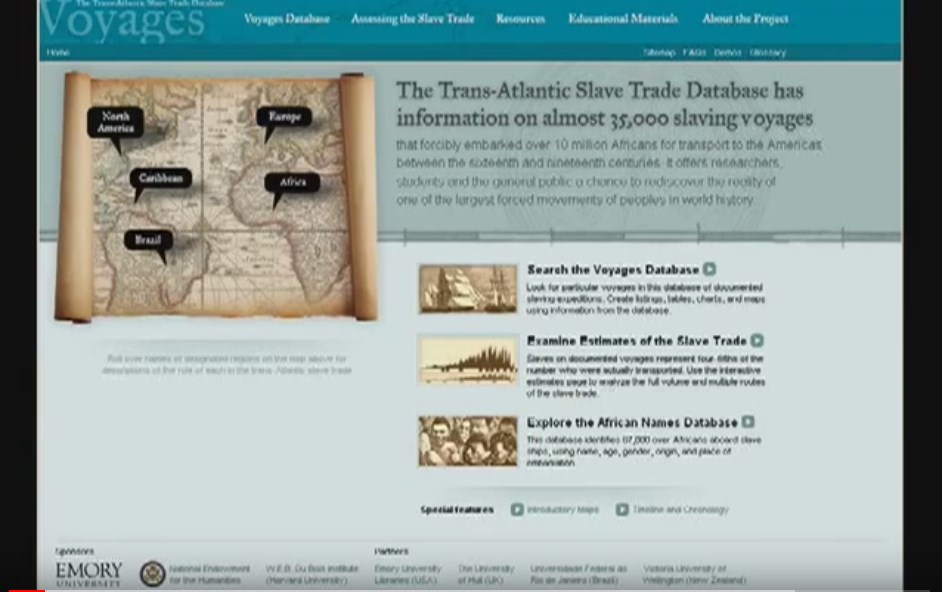 http://www.slavevoyages.org examines the rise and fall of the Atlantic slave trade, using records of 35,000 slave voyages. Instructor David Eltis (www.history.emory.edu/Faculty/eltis.html), a co-principal investigator of the project that created slavevoyages, has created a handy tutorial for students and others interested in using the site.

The Slave trade was mainly run by rich Jews and some gentiles. The majority of people of Jews faith worldwide did not have slaves.

chiboy773 3 years ago
They use to let you check names..They must've Changed it cause israelites are waking up..All the names were hebrew

Ange Browne Edited
Reportedly, some Native Americans also owned slaves even prior to Columbus. However, the Transatlantic Slave Trade was around 350-400 years out of millions of years of people worldwide enslaving their own and others, and the TAST was circa 98% Jewish owned and run. Their ships, their slave ports, their auctions, their plantations.
The first slaves to Jamaica were stolen little white Irish children age 8/9. Others were 4-5 years. Yet others were teens and young 20's coshed over the head or got drunk and dragged aboard slave ships. That wasn't indentured.
There were around 6X more white than black slaves in America. Being so many, they were cheapest and used as disposable. Worked, beaten, starved, thirsted and raped to death. A great many only children.
Giving indentured slaves a plot of land and money? You think they let the majority live that long? You think a lot of those who did live weren't falsely accused of crimes so they would be sent to prison or be hung rather than let them have land and $? The slave owners would have had none of their stolen land and ill gotten $ if they had given chunks away every 7 years. It was mainly SOME of the later transported 'criminals' and a tiny few very poor who did volunteer for inentured, and fewer survived. 'Criminals' for speaking a word against the king, or for stealing a mouldy sawdust filled roll of bread. There was no national birth registration. If the magistrates decided a 7 year old child was 10, the kid could be deported into so called indentured slavery. 7 yr olds were hung - and they knew and recorded them as being 7 yr olds.
Then there was the white slavery to Australia under the guise of punishment for crimes. How many black or Native American people were transported to Australia? It was the new white slave colony even up to WWII, when frightened parents were talked into sending their children there to be fostered 'for safety'. A lot of those families were never re-united and a lot of children were lied to that their families were dead, bombed, or didn't want them. Siblings were separated. Younger ones were often made to forget their own real names. Almost all were mistreated as slaves. That was under the mis-government of Winston Churchill and King George.
The Irish talk about it a bit but much more covered up is that they also stole children and young people from the port at Bristol and and from around the SW Coast of England, where they could moore their ships.
If you disbelieve it, look up the names and family histories of those who were paid reparations for the loss of slaves at abolition in the UK and in America. Most were 'Jewish' or 'jewish' and many supposedly took on Christianity. What a trick. Their relations in mis-governments both sides of the Atlantic ensured they were paid compensation, and that the mis-government borrowed the money to pay it from themselves or their other relatives at extortionate interest. It was only in 2015 that the mis-government in Britain gleefully told us "Well done! You have paid off the debt of the money borrowed to compensate slave owners". Around 200 years to pay it off because they kept it going for so long with extortionate interest. Borrowed from them to give them real money - gold money - that they should instead have been made to pay the surviving slaves and their families. Today that same ilk are globalist zionist supremicists.
Being so far apart they could often get away with lying to blacks, whites and Asians about what each other are like, and about each others true histories. Now we know so much truth.

Being so far apart they could often get away with lying to blacks, whites and Asians about what each other are like, and about each other's true histories. Now we know so much truth.

They can't lie that it was us if they allow it to be known they did it to us too.

Before that it was mainly Arabs who enslaved black, white and anyone they could lay their hands on within the Fertile Crescent and in Africa. Do you ever hear much about that? Do you ever here 'Jews' complaining about Arabs enslaving and the millions of black Ethiopians alone they slaughtered for thousands of years? No.