Changes Made to Christianity

Christianity in Western Countries is in decline, for example; The Church of England in Britain has lost half its membership in 50 years and has lost approximately 2 million attendees since 2002 alone.  Many of its religious leaders in top positions have been taken over by Globalist traitors (some are Jesuits), who want to destroy or greatly change Christianity and use the organization as a tool to flood Western countries with Muslims. This will do nothing but result in the destruction of true Christianity.  Our research alarmingly shows that many of these same leaders also have no religious belief and are only within the church for power and position.

The Globalist who control the media have been very active with the support of major false Jewish organizations who want to destroy all religions and merge them into a single new religion.  They have been very successful in changing Christianity from a religion that historically fought for Europe against Muslims, to one which has many people describing ministers as "gutless" and "clueless."  Few people realize that the Socialist/communist have been making changing in some modern religion and they have a strong influence in Christianity through Christian colleges. They and have been rewriting the Bible to mean something different to what it originally meant.

There have been many versions of the Bible since the very first English translation in 1611 by King James and 47 scholars over a period of seven years.  Just looking at the list linked here:  www.tyndalearchive.com/scriptures  shows at least 100 different versions and editions.  You could easily see that through time, the latest editions of the bible could have been gradually altered bit by bit.  We are sure that if you were to compare an original Bible from the 17th Century to one published within the last few decades they would read very differently indeed.

Each version of the Bible has their own abbreviation, some of which are mentioned in this article and the links included.  To try and make things easier to understand, we have included a link to a Wikipedia article which lists all the different Bible versions as well as some abbreviations which are needed to fully comprehend this article:

Which Bible Is Right?

Christians do not realize that the Bible has been changed.  The videos featured below tells of Rupert Murdoch, a Zionist who owns the publishing company Westcott and Hort, has published a version of the Old Testament called the New International Version (NIV), and these changes have altered the meaning of those passages.  This has been done to change Christianity to become part of a New World Order Religion.

Modern religion is designed by international anti-Semitic Zionists to control the public today.  Some of the words that have been completely removed are “Messiah,” “Jehovah,”  “Holy Ghost,”  “Comforter.”  The Bible is no longer God’s word.  It is becoming man’s word!

We want to develop Christian ideals based on the original teachings, for example:

The original ideas of Christianity did not promote genocidal interracial relationships, yet they promoted the idea of "an eye for eye and tooth for a tooth."  This means that if organizations are attacking you or your people, you may attack back and play them at their own game.  This was their take on it back in the Old Testament days.

The family was also very important and men and women made decisions together.  The lady was head of the house, and the man was head of the family.  Married women during the 1300s wore a scarf, did not reveal cleavage and wore long dresses.  They married young and had their children young.

Which Bible Is Right?  KJV vs. New World Order "Bibles" NIV, NWT, RSV, NEV
Youtube Video by Pastor Mike Hoggard outlining the differences in Bible Versions.  The screen shots below are the work of Pastor Mike Hoggard.  For more information on these discrepancies please visit his website.

See why and how modern Bible versions promote the Antichrists New World Order!  In this video, you should really SEE some very good reasons why only to use the KJV - at least I pray you do!  For me personally,

it was shocking to learn that the NIV, NASB, NWT (Jehovahs Witnesses) RSV, ESV etc, are all based on the texts that suddenly "were discovered" in a Roman Catholic monastery by the end of the 17th Century and edited by Westcott and Hort - occultists. 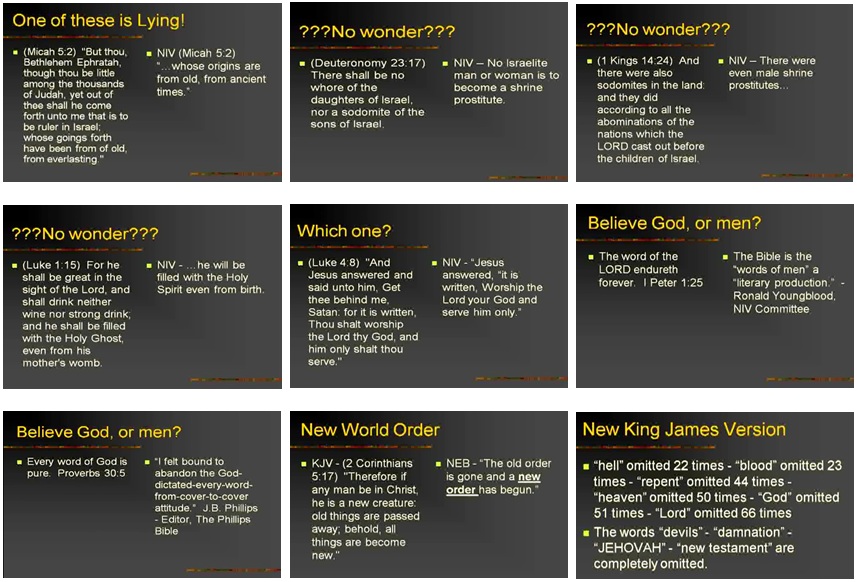 The Holy Bible created by Zionists

Cyrus Scofield is a small time politician and career criminal.  In 1873, he is forced to resign his position as a District Attorney because of crooked financial transactions that include accepting bribes, stealing political contributions and securing bank notes by forging signatures.

Scofield then serves jail time for forgery charges.  A heavy drinker, Scofield later abandons his wife and two daughters.  His wife finally divorces the drunken crook in 1883.  As so many con-men do, Scofield will then claim to have “found Jesus”.

He is ordained as a Minister and then claims to have a Doctor of Divinity degree, but this degree is never verified.  After several mysterious trips to Europe and New York, Scofield publishes the notated reference Bible that bears his name.  The added side notes in Scofield’s Bible inject a very weird “End Times” prophecy into Christianity.

Because of Scofield’s altered Bible, many Christians today believe that Jesus will return to save his followers from the “End Times Great Tribulation” (The Rapture), after Israel is established and that “God will bless those who bless Israel.”

This Biblical alteration, at the hands of a known criminal marks the beginning of a powerful force in American politics known as “Christian Zionism.”  Many millions of “Evangelical” Christians have been mentally infected with Scofield’s poison.

Christian Zionists are even more fanatical in their support of Israel than the Jewish Zionists are!  The Scofield Bible is very good for Zionism!

Cyrus Scofield and the subversion of modern Christianity