Khazars: History of the Jews

Many Jews are actually Germans, who are descendants from German tribes in Europe.

If the Ashkenazi Jews had descended from Khazars they would have been speaking a Turkic language but their language Yiddish is based on the southern German dialects.

Most Jews today are not descendants from Israel or from the Khazars tribes that were then located in ancient times between the Caspian and Black Sea. If you look at Jews, you will see there are many variations in the population, which proves many of them are gentiles who converted to the Jewish faith. Jews do not speak the Turkish language; they speak a Yiddish language, which is based on a southern German dialect.

Many Jews are actually Germans, who are descendants from German tribes in Europe. The Rothschild's banking family's original name was Bower, which is an old German name and Rothschild's new name of date, translated in German, Red Shield.

Wikipedia. Its origins date back to 1743 when a German goldsmith, Amshall Moses Bower, opened a counting house in Frankfurt. He placed a Roman eagle on a red shield over the door. Rothschild is German for "red shield", and Bower's son adopted the name. ... Rothschild manufactured gold bars for more than 100 years, until 1967.15 apr. 2004
Rothschild - Wikipedia. "Rothschild (German pronunciation: [ˈʁoːt. ʃɪlt]) is a name derived from the German zum rothen Schild (with the old spelling "th"), meaning "with the red sign", in reference to the houses where these family members lived or had lived. ... The name Rothschild in Yiddish means "red coat" (coat as in heraldic coat of arms)."

The Jewish population has a high percentage of people with blue eyes; many have blonde hair and are tall in statue. Many of These people's ancestry comes from Germany and Scandinavian. Some Jews are short in frame, and some of their ancestry came from around Grease and Italy, because back during the Roman Empire, people were shorter and Germans taller.

Many Jews have long noses, and have the "long nose gene," which is very predominant between the Black Sea and the Caspian area. Over time these genes have been passed on to their children.

Some Jews came from the Middle East area, and their ancestry could come from local tribes or the North Sea people, which moved into Palestine from Italy, Grease, Turkey etc. This would also be true with many Palestinians; both these groups have indigenous rights to Israel or to others called the country Palestine. 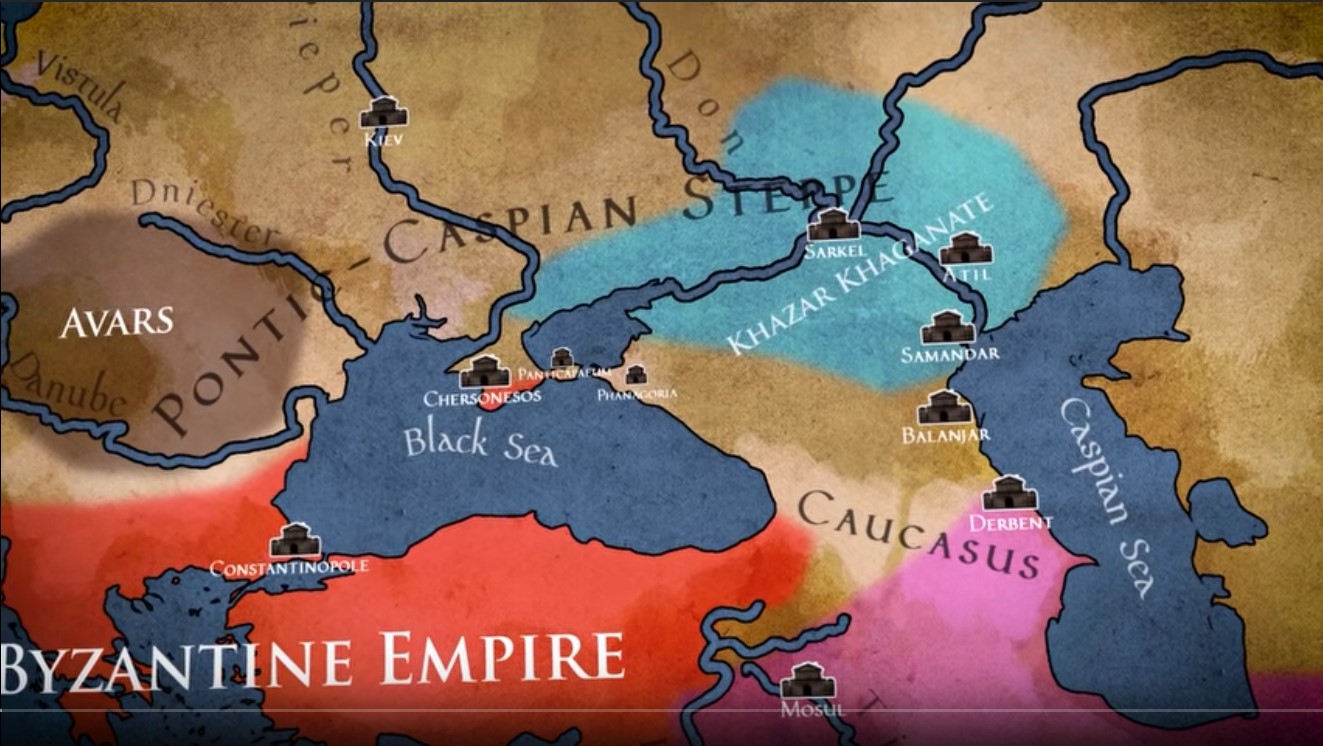 TheWinged Hussar 4 months ago
You know what, this makes me wonder, what if Judaism did establish itself more in this region. What would this effect if the majority of the populace converted to Judaism. What would this result in?

Dan Sanders 4 months ago
Khazar Theory has been disproven for over 30 years.

Renáta Béres 4 months ago
They are mentioned in our history books, as Khazar Khaganate's territory was one of the places where hungarians settled. Also, magyars(hungarians) and khazars were allied (but Khazars ruled). Magyars didn't destroy the Khaganate, but they rebelled against them, hence Magyars had to left Khazar territory.

allan lanktree 4 months ago
Great video. Many stories surround the choosing of Judaism by the Khazars. One is that on having an audience with Muslim and Christian missionaries, the king of the Khazars realized that both religions mentioned Jewish prophets as their faiths originators. After an audience with a rabbi the king chose Judaism. Another states that the King asked the Muslim Missionary, "Which is better Christianity or Judaism?". Not wanting to give the Christians any credit the Muslim answered, "Judaism". The King then asked the Christian missionary, "Which is better Islam or Judaism?". Not wanting to give Muslims credit the Christian answered, "Judaism". Therefore under the advice of Muslim AND Christian missionaries, the King chose Judaism. Unfortunately for the for the Jewish Kingdom, it was finally extinguished by Turkish Muslims and Russian Christians.

TRUTH HUNTER 1 week ago
Nice video. All i'll ask you...prove from the bible that Europeans of any group is from Abraham. And the most harder question the bloodline to Judah's family tree. I've discredited your video on my page, in less than 2 1/2 minutes. But you really know the lies well, after all liars taught you. Don't forget my question i want to know, the family tree and bloodline connection to the biblical Hebrew, Israelite Jews to any European. Shalom. lol
Ken DelloSandri 4 months ago
Great video. This is the history of Talmudic Jews, as the human genome project proved, like 99% of Jews have zero semitic blood. They are Not semites nor do they have any relation to the Old Testament Hebrews. To be a jew is a religious construct not a racial one. To be an anti semite should be the hatred of Palestinians, Lebanese, Jordanians etc. Not the hatred of the ancestors of converts from the Caucus mountains. This is the great lie of the state of Israel. They have no right to Palestine.

Joe Glickman 4 months ago (edited)
Dude awesome video. As an Israeli one little note your texts in Hebrew are reversed, Hebrew is written from the right to the left unlike English which is left to right. Plus you can add that, two of the Khazar's tribes have migrated with the Magyar Tribes to form Hungary and were possibly the forefathers of the Hungarian-Jewish community there although, there was a small Jewish community in Panonia Since about 75AD. And again awesome video. Best regards, The Israeli Hungarian Jew.

Oghuzsak Toqquzsak 1 week ago
When I lived in Paris, I lived in a Jewish concentrated area, and have seen many Jewish families. I was surprised that few of the Jews I met looks like more Central Asian than European. Also, I noticed that the furry hat (shtreimel) they wear is also Central Asian/Turkic style. Because a furry hat does not suit for the hot weather of Middle east, and surely it did not originate from there.

A.D 2 months ago
Turkic peoples are really important to understand Eurasia history.You can see them in almost every religion and every various cultural type in different corners of Europe and Asia. They are so unique.

Kandeh B 1 day ago
They make up the fabric of the European Jews mainly in Russia, Poland and Germany. In Authur Kesthler's book he referred to them as the 13th Tribe meaning they do not belong to the 12 tribes of Israel they are converts to Judaism and no more.

Burak Simsek 3 months ago
For the people who deny ethnic roots of Khazars, here is a genetic study: Over millennia, steppe nomadic tribes raided and sometimes overran settled Eurasian civilizations. Most polities formed by steppe nomads were ephemeral, making it difficult to ascertain their genetic roots or what present-day populations, if any, have descended from them. Exceptionally, the Khazar Khaganate controlled the trade artery between the Black and Caspian Seas in VIII-IX centuries, acting as one of the major conduits between East and West. However, the genetic identity of the ruling elite within the polyglot and polyethnic Khaganate has been a much-debated mystery; a controversial hypothesis posits that post-conversion to Judaism the Khazars gave rise to modern Ashkenazim. We analyzed whole-genome sequences of eight men and one woman buried within the distinctive kurgans of the Khazar upper (warrior) class. After comparing them with reference panels of present-day Eurasian and Iron Age populations, we found that the Khazar political organization relied on a polyethnic elite. It was predominantly descended from Central Asian tribes but incorporated genetic admixture from populations conquered by Khazars. Thus, the Khazar ruling class was likely relatively small and able to maintain a genetic identity distinct from their subjugated populations over the course of centuries. Yet, men of mixed ancestry could also rise into the warrior class, possibly providing troop numbers necessary to maintain control of their large territory. However, when the Khaganate collapsed it left few persistent genetic traces in Europe.
Our data confirm the Turkic roots of the Khazars, but also highlight their ethnic diversity and some integration of conquered populations. Source: https://www.biorxiv.org/content/10.1101/2019.12.15.876912v1?fbclid=IwAR0SRCPq8vGJjskvkoUj5ifPQay89Lhfcs9qp18dOdBTIOqFQJraKm_B294

Eren 4 months ago (edited)
My father comes originally from the caucasus. They moved after wars zo Sivas in Turkey. We tested his DNA and he has 10% ashkenazi, I only 2.2%.

Stephen Thomas 4 months ago
When I was in Georgia I went to the Svan region in The Caucasus Mountains. The Mediaeval defence towers can still be seen across the landscape, dating back to The 9th Century.

Saguntum-Iberian-Greek Konstantinopoli 4 months ago
Funny thing, i was watching "Neglected history" yesterday "The Khazar Khanate" and today a video on that appears, wow, am i watched?

Lior G. 4 months ago
Note: Ashkenazi Jews appeared in Central Europe (Germany). Their spread to the Rus thus came from the west, and not from Khazar. Greek Jews, for instance, are not Ashkenazi Jews despite being European, and neither are Spharadi Jews who are also European from Spain (until the Inquisition). Ashkenaz is the ancient name the Hebrews gave to the area we know Germany/Austria/Czechia today, where as Spharad is Spain.

Dimitri Iobadze 4 months ago
What about Georgians, we been sleeping in a bed or what ?

el vago 4 months ago (edited)
Kiev in your video is never part of Khazaria. In fact it was founded by the Khazars, both the city of Kuyab (=uncle's) and the adjacent fortress of Sambat (=hill fort). Actually, a lot of modern cities in Russia and Ukraine were founded by the Khazars and their Turkic brethren the Bulgars. Kiev was known by the Arabs as Kuyaba Sambat and by the Byzantenes as Sambatas. Varangian raiders overran Kiev, which allowed them to found the Rus (=Varangian) Khaganate. But only after the Varangian warlord later known as Svyatoslav (son of Ingvar and Helgi) had grown up on horseback following the nomad ways of war, were the Varangians able to defeat the declining Khazaria.

Harold Haroldson 4 months ago
I think the Star of David was made the symbol of Judaism only within the last couple of hundred years.

Paul Kirshman 2 months ago
This was fascinating and not what I expected when I ventured to watch this. Every ethnic as well as racial population has some low percentage of genetic markers from others but the Ashkenazi Jews have a population profile that most closely matches the Palestinian population with the exception that the Ashkenazi Jewish population has European maternal mitochondrial DNA matching the gentile European maternal mitochondrial DNA from the countries they lived in ( ex:Polish, Russian....). I am sure that the Khazars were a Judaic empire of converts and wish they had survived ( like the Ethiopians) but sadly, it seems that they have disappeared for good and have blended into the subsequent conquering empires.

KI Legacy 3 months ago
The turks are extremely interesting! You should also consider making a video about the christian turkic army called Turcopole, they were Crusaders.
Read 2374 times Last modified on Thursday, 04 November 2021 21:28
Tagged under
back to top