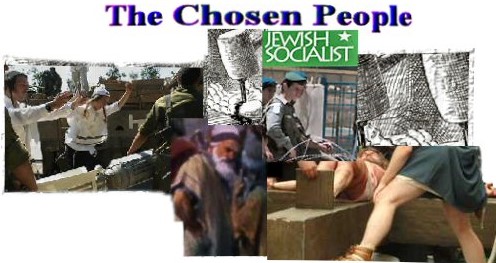 HOW CAN THE JEWS who oppose their own Messiah, Jesus Christ, be the “Chosen People?”

Christians Are God's Chosen People NOT Jews!, Jews & Their Guilt Of Deicide, State Of Israel: Not Biblical Prophecy!, Jews Are NOT The "Chosen People", Why The Jews Hate Jesus Christ

Jews Are NOT The “Chosen People”

HOW CAN THE JEWS who oppose their own Messiah, Jesus Christ, be the “Chosen People?”

Did not St Paul, the Hebrew of Hebrews, say that the Jews are the enemies of the Cross? (Philippians 3 )

When St Paul said, “The Jews killed the Lord Jesus and their own prophets; they please not God but are contrary to all men: Forbidding us to preach the Gospel to the Gentiles that they might be saved, to fill up their sins alway: for the wrath of God is come unto them to the uttermost,” did he not make it crystal clear that the Jews are not the “Chosen People?”

How then can the so-called Jews who are now the enemies of the Cross and of the Synagogue of Satan, and who must worship at the feet of Christians, be the “Chosen People?”

Jesus Christ the Messiah of Israel denounced the Jews for rejecting Him when He said, Behold your house is left unto you desolate. And you shall not see Me until you say, Blessed is He Who cometh in the name of the Lord. (St Matthew 23) How then can the Jews whose house is now desolate be the “Chosen People?”

How then can the Jews whose house is now desolate be the “Chosen People?” When the Jews cast in their teeth that they were the seed of Abraham, Jesus replied, “You are of your father of the devil who was a murderer from the beginning.” (St John 8).

Indeed the Jews committed the crime of all crimes, namely, Deicide, when they brought Jesus Christ to Pontius Pilate demanding that Jesus Christ be crucified even when Pilate judged Christ innocent and desired to set Him free. (St Matthew 27).

How then can the Jews, whose father is the devil, and they being murderers like the devil himself by crucifying the Lord of Glory, be the “Chosen People?”

DID NOT JESUS CHRIST say, “Woe unto you, scribes and Pharisees! For you compass sea and land to make one proselyte. And when he is made, you make him twofold more the child of hell than yourselves?” (St Matthew 23).

Even secular Jews defer to the rabbis as their leaders when it comes to interpreting Jewish dogma. How then can the Jews who are children of hell be the “Chosen People?”

St John the apostle said, “Many deceivers are gone out into the world who deny that Jesus Christ has come in the flesh. This is a deceiver and Anti Christ.” (II John 1).

How then can the Jews who to this day deny that Jesus Christ the eternal Son of God became man for our salvation be the “Chosen People?” Will we be “deceived” by the Jews that they are the Chosen People? What then is the Jews’ “chosen-ness?”

In the book of Revelations it is written: But the fearful and the unbelieving and the liars shall have their part in the lake which burneth with fire. This is the second death.

1. The Jews are fearful of death.

3. The Jews are liars. For they say that they are God’s chosen people when God says that they are an “accursed people” because of their sins. (Isaiah 66:20).

Thus the only “chosen-ness” of the Jews is their being chosen to experience the “second death,” that is, the “lake of fire.”

MOSES WHOM THE JEWS boast as being their hero pronounced a blessing and a curse on the Jews. God, said Moses, would bless the Jews if they showed their love for Him by accepting the “Prophet” Whose teachings would be required of the Jews. (Deuteronomy 13).

But the Jews crucified the “Prophet” rather than receiving His teachings on repentance and confession of his Divine right to demand obedience. Thus the curses that Moses pronounced upon the Jews have been the Jews’ experience over the last 2000 years. (Deuteronomy 28).

Hated, persecuted, censured, (rightly so), wandering from nation to nation when expelled from their host nations, and wreaking havoc wherever they go in their hatred of Christianity, the Jews have indeed experienced the curses predicted of them by Moses and the desolation that Jesus Christ predicted of the Jews for rejecting Him.

What “blessings” have the Jews brought to the world since 33 A.D.? Just read today’s headlines and one can clearly see that “curses” have been brought upon society by the Jews.

The War in Iraq serves only the interests of the Jews and their promotion of the Christ-hating State of Israel. The tragedy of the World Trade Center was a result of the Zionist agenda.

Are all of these things “blessings” from the so-called, “seed of Abraham,” the Jews? No. These are all “curses” brought upon us by the “seed of the devil,” the Jews.

Christians ARE God’s “Chosen People” – Not Jews. Christians are the “seed of Abraham.” This is what St Paul the Hebrew of Hebrews said over and over again. Here is one instance of St Paul’s many assertions that Christians NOT JEWS are the seed of Abraham: “If ye be Christ’s then are ye Abraham’s seed.” (Galatians 3:29).

WHEN JESUS CHRIST said to his disciples, “I have chosen you that you should go and bear fruit and that your fruit should remain,” Christians were sealed as God’s Chosen Peoplefor all time. Jews can share in the Christians’ “chosen-ness.”

Jews can share in the Christians’ “chosen-ness.” Jews do not have to continue in a state of “accursedness” and “desolation.” Jesus Christ offers the Jews the chance to embrace Him and have His blessed name called upon them. Yes Jews if they will repent can be called Christians too!

Yes Jews, like myself, a former-Jew, and thousands of others like me, can say, “Blessed is He Who Comes in the name of the Lord! Then the Jews can look forward to heaven and not the lake of fire.