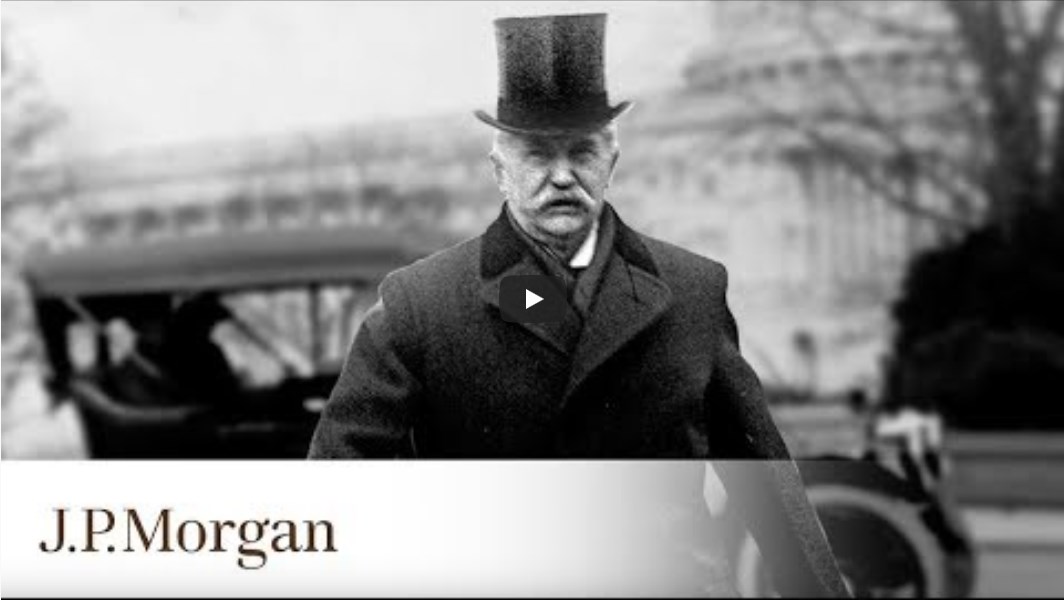 "One of the most powerful bankers of his era, J.P. (John Pierpont) Morgan (1837-1913) financed railroads and helped organize U.S. Steel, General Electric and other major corporations."

The CEO of JP Morgan Chase is Jamie Dimon was born to Greek Jewish immigrants.

"During the late 19th century, a period when the U.S. railroad industry experienced rapid overexpansion and heated competition (the nation’s first transcontinental rail line was completed in 1869), Morgan was heavily involved in reorganizing and consolidating a number of financially troubled railroads. In the process, he gained control of significant portions of these railroads’ stock and eventually controlled an estimated one-sixth of America’s rail lines."

"During Morgan’s era, the United States had no central bank so he used his influence to help save the nation from disaster during several economic crises. In 1895, Morgan assisted in rescuing America’s gold standard when he headed a banking syndicate that loaned the federal government more than $60 million. In another instance, the financial panic of 1907, Morgan held a meeting of the country’s top financiers at his New York City home and convinced them to bail out various faltering financial institutions in order to stabilize the markets." The above quotes from J.P. Morgan 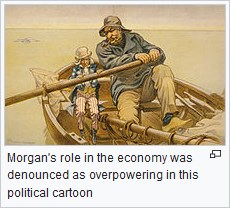 "His son, J. P. Morgan Jr., took over the business at his father's death, but was never as influential. As required by the 1933 Glass–Steagall Act, the "House of Morgan" became three entities: J.P. Morgan & Co., which later became Morgan Guaranty Trust; Morgan Stanley, an investment house formed by his grandson Henry Sturgis Morgan; and Morgan Grenfell in London, an overseas securities house."

"Morgan was a lifelong member of the Episcopal Church, and by 1890 was one of its most influential leaders.[51] He was a founding member of the Church Club of New York, an Episcopal private member's club in Manhattan.[52] In 1910, the General Convention of the Episcopal Church established a commission, proposed by Bishop Charles Brent, to implement a world conference of churches to address their differences in their “faith and order.” Morgan was so impressed by the proposal for such a conference that he contributed $100,000 to finance the commission's work.[53]" 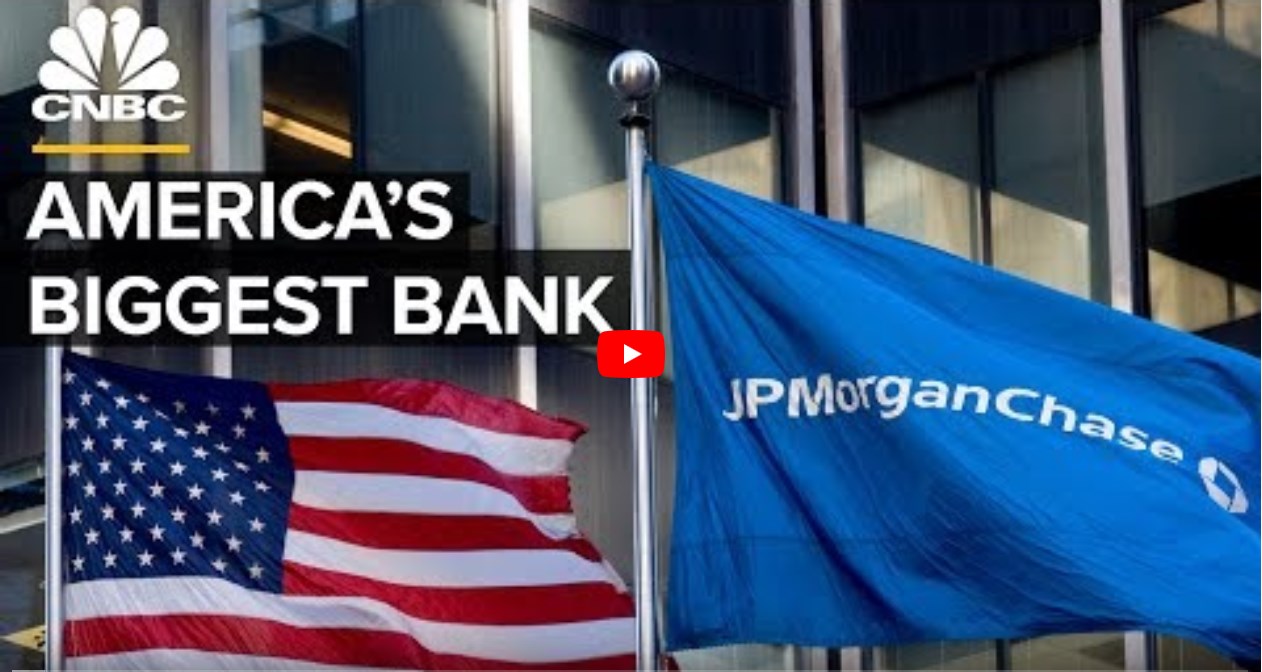 How JP Morgan Chase Became The Largest Bank In The US

***Clarification*** Since 2004, investors in JPM stock have outperformed the bank stock index by an average of 6% return every year. That's more than 6x the return of the index yearly (13:52)

In February, J.P. Morgan Chase announced it was in growth mode, expanding its branch network to cover 93 percent of the U.S. population by the end of 2022.

The aggressive growth plans will allow it to reach 80 million more consumers, or about one-quarter of the U.S. population, versus its footprint in 2018, the New York-based bank says. 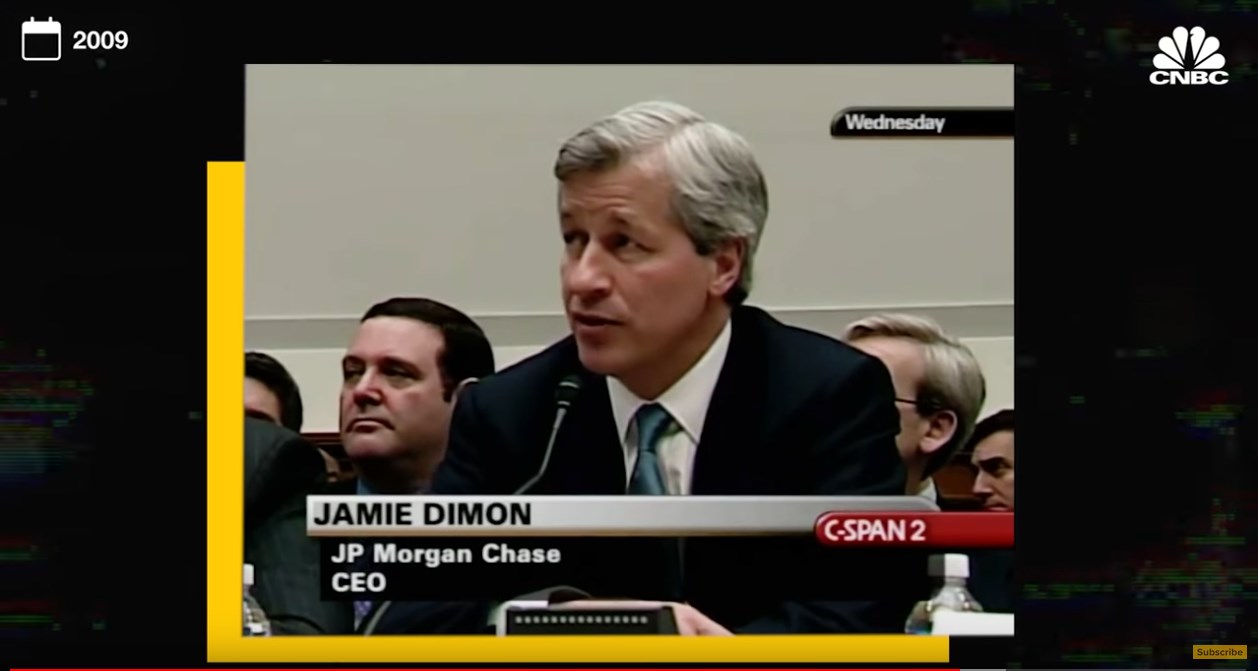 "Dimon was born in New York City. He is one of three sons born to Greek Jewish immigrants Theodore and Themis (née Kalos) Dimon. His paternal grandfather who was a Greek immigrant changed the family name from Papademetriou to Dimon to make it sound more French."

Nathan Mayer Rothschillds married his daughter in the Morgans and the Bank of England and Banko Ambrosia of the Vatican were taken over in 1823. Bank of America and Chase Manathan etc etc are Exposed as charging the US tax payers 19% USARY. Allan.

He was an oligarch of the Rothschild money doing their dirty work to establish fractional reserve centralized banking for a third time after being kicked out twice before for bankrupting the Nation. The third time which should have never happened, was by creating a panic and a run on the banks to create a crisis and bank failures except for the chosen few banking families of the establishment. That brought us to the meeting of financiers and bankers in Jekyll Island to draft the federal reserve act which would tax our income and enslave every working class American for the rest of their lives.

I couldn't finish this one. It made him seem admirable. Hope they mentioned when he died we figured out he was a Rothschild puppet.

For One Light 4 months ago

Revisionist HISTORY .. This video doesn't talk about a dozen of his business ventures .. One in particular General Electric and his lust to be number one in power generation in the country .. Upon his death, 90% of his wealth went back the Rothschild Bankers who he Shilled for ..

His parents saw in him the potential of leadership and groomed him for a career in leadership. - How many of our idiotic parents groomed us for a career in the coal mines because they could not see beyond the dust to see higher. We are the products of our environments.

Karan Ferrell 4 months ago
The highly rich run the United States of America, and not "WE THE PEOPLE." They have always been in control!

Ken Rehill 4 months ago
Diamonds didn’t have the same value back then, they were worth nothing until de beers launched their bullshit marketing plan about the months salary

Dino Gerardo Provido 1 month ago
JP Morgan was just a pawn of the Rothschilds family.

Roo ClickNet 4 months ago
"The time to buy is when there's blood in the streets."---Baron Rothschild

leonard bolton 4 months ago
Morgan like Rockefeller was just a Rothschild agent.

David Reinhart 4 months ago
This video doesn’t tell us that the bankers were the ones that caused all the financial distress that they conveniently rescued us from. The biggest trick was the Federal Reserve. A private bank licensed to rob this country and its citizens blind.

Charles Price 4 months ago
Morgan is one of the names behind the Globalist Banking Industry, the FED, and the NWO presence. The source of every war before and after, backing both sides and following the one that would provide the most profit and power. His irreptiable life reflects the tactics he used. Everyone else pays the price for his actions. He and his club cronies are the lowest form of existence, while parading as the world's elite. What they profess is what they are not. What they accuse is what they do. They engineered the mirror world we live in. This propaganda tripe is insulting.

David Leahy 4 months ago
A very whitewashed biography. No critique of forming a railroad cartel. Seems to have been a front for European financiers to control U.S. assets. It is now known that he was behind the banking instability that gave the banking elites a chance to form the PRIVATELY OWNED U.S. Federal Reserve. No mention of the Jekyll island secret meeting that draughted the Federal Reserve system. From then on they issued the Federal U.S. currency, and received interest from the U.S. government, which is serviced by taxing the U.S. citizens.

TheInvisibleOne 4 months ago
America allowing such huge concentrations of capital into only a few men's hands is why we are in the situation we are in today.  Half of the world's net wealth belongs to the top 1%, top 10% of adults hold 85%, while the bottom 90% hold the remaining 15% of the world's total wealth.  It's all been the greatest robbing and wealth transfer through corruption of our lifetimes.

Midwesterner 4 months ago
The conclusion that Morgan left banking in the end is completely wrong. He got Wilson elected to create the Federal Reserve (the Creature from Jekyll Island) and push through income taxes. A system right out of Marx's book that forever steals your labor to pay for bank notes lent to the Federal Government at interest. His last acts were to assist the the international banking cabal in bringing about global government through socialism.

jovany escamilla 1 month ago
I’m glad the president of the United States rejected his offer of controlling the countries reserve. He was planning on coming in with the Rothschilds bankers. Eventually in 1913 the federal reserve came into effect. This was the beginning of the end of our country. Wealthy people of the world control our country and it is absolutely sad. We are held ignorant about everything going on around us. One day they will face the judgement of god. When that day comes they won’t be able to hide behind all their money

Alfred Brown 1 year ago
what I admire most about wealthy people is they take the time to educate and teach their children. There is a reason why wealth is able to go from generation to generation. I am sure he was Morgan was greatly influenced by his predecessors.

Constitution_89 4 months ago (edited)
I was captivated with the narrative of this documentary but Always with the suspicion of Morgan's control and underhandedness behind many if not All of the "problems" the country and government faced at any given time especially with the "European Money" reference throughout the narrative. And as I see in the comment section my thoughts also of Rothschild influence and even control which I was looking out to hear but Never came. It was then confirmed in the portion of this "documentary" that referred to the "Panic of 1907" which itself was not heard nor named as such and with NO Responsibility or accusation of J.P. Morgan's orchestrated involvement in creating that is Known FACT today that made this so-called "Documentary" little more than a imagined Farce making a Greedy and Evil man out to be Almost Saintly which he was the opposite of Entirely.
Bottom Line is that J.P. Morgan was as Responsible for the Greatest Treason inflicted on the U.S. that was the "Federal Reserve Act" as then President Woodrow Wilson, Sen. Nelson Aldrich, "Col." Edward Mandel House et al as any of the other Traitors responsible for this ruination of this Once Great Republic. Why None were ever HANGED and why a Second American Revolution was not organized to Rid the country of this International Zionist Orchestrated Central Bank Ponzi Scheme even into the 1940's with the next Greatest Traitor President FDR I guess we'll never know. What I do know right Now is that the Greatest Republic humanity has ever known called America is Absolutely FINISHED and will Not be coming back and We The People have Not seen the Worst of it yet by a Very Long Shot.
Ah, the P.S. ... the "Panic of 1907" would be mentioned in the last 5 minutes as would an even Greater Scumbag who would do more to change Our World than even J.P. Morgan ... the Zionist Luciferian Scumbag Samuel Untermyer who should have been HANGED Twice just for being who he was and was Responsible for which were more Deaths of innocent Men, Women and Children than probably Any other Demonic POS in History. Glad he's Roasting in Hell even Now and Forever will be.
Read 2917 times Last modified on Thursday, 27 October 2022 01:46
Tagged under
back to top