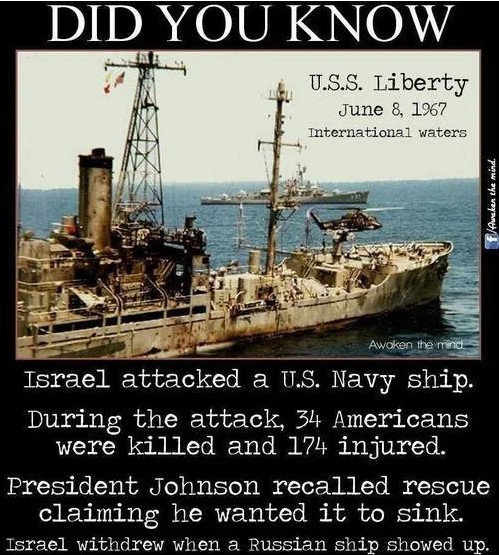 On June 8, 1967, US Navy intelligence ship USS Liberty was suddenly and brutally attacked on the high seas in international waters by the air and naval forces of Israel, killing 34 Americans and wounding another 174.

The Israeli forces attacked with full knowledge that this was an American ship and lied about it. Survivors have been forbidden for 40 years to tell their story under oath to the American public. The USS Liberty Memorial web site tells their story and is dedicated to the memory of the 34 brave men who died. For more information: http://www.gtr5.com/ 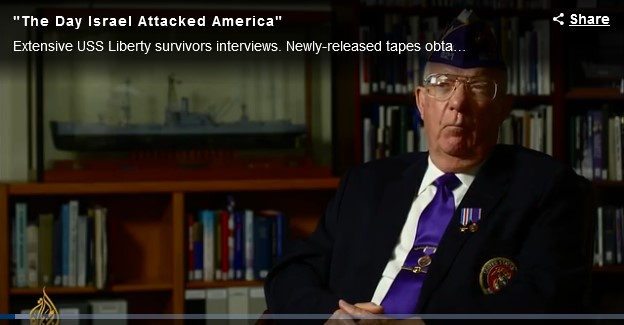 Extensive Interviews with USS Liberty Survivors' - Audio tapes obtained by award winning British film maker Richard Belfield prove what every USS Liberty survivor, former Secretary of State Dean Rusk, and former Chairman of the Joint Chiefs of Staff Admiral Thomas Moorer have said all along: that Israel deliberately attacked an American ship. The plan was to sink it, blame Egypt, and draw the US into the Six Day War on the Israeli side, but the heroism of the Liberty crew in fighting ship damage, often while wounded, prevented it from sinking with all hands. The tapes are featured in "The Day Israel Attacked America" by film-maker Richard Belfield, whose previous production credits include National Geographic TV and Discovery Channel.

On June 8, 1967 the Air and Naval Forces of the Zionist Terror State of Israel attacked our surveillance ship the "USS LIBERTY" in an attempted 'False Flag' attack, they failed, but their War Crime resulted in the deaths of 34 and the wounding of another 200, of our fellow citizens, Sailors! LBJ our TRAITOR of a President covered that crime up, and it has been avoided, smoke screened, IGNORED ever since by our, PROSTITUTED Government! America-The Land of the Free, has morphed into a PLANTATION that is controlled by the Zionist Overlords! For almost half a century now, since the murder of our President, 'JFK' the blood and Treasure of our people has been used-abused as the Sacrificial Offerings on the barbaric-bloody Altar of Zionism on the World Stage! Who done 9/11? Who placed, "Controlled Demolition Explosives" into WTC, Towers and building #7? Who OWNED those structures? Who had the Security detail in and around those Towers! How come our Congress doesn't Investigate 9/11 with the same drive, enthusiasm, attention to details as what they have done with the 'phone calls to the Ukraine/Impeachment HOAX? I tell You Why? They know that that major Undertaking to place/install explosives into those Giant Structures required a lot of time, logistics, security, safety to accomplish! It must have taken MONTHS, if not more time! Our Government/Congress is aware of the fact that to accomplish all that parts of our Security Agencies/Entities had to play along or at least, 'TURN the Other Way' to allow it to happen! It was a 'False Flag' attack that turned out to be a success, unlike what they done to the "USS LIBERTY." They murdered close to 3 thousand Collateral Victims, this Tragedy triggered the attacks by US on the Middle East! We turned that part of the World into HELL on Earth! Call out our CONGRESS to apply themselves with the same ZEAL, as what they have shown in the Impeachment HOAX, and find out WHO DONE the 9/11/2001, Crime of the Century against the American People! We have a RIGHT to know the TRUTH! Look up; AE911TRUTH.ORG.