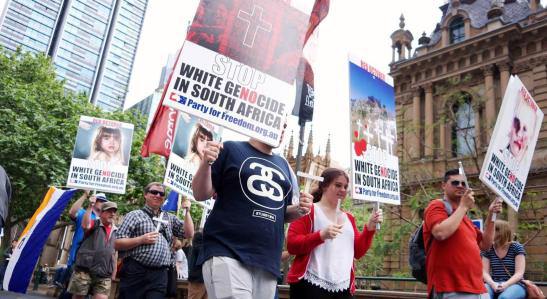 The political climate for Europeans living in South Africa is dire.  At present, the murder and rape rates of white South African residents is so worrying that this, alongside the extreme racial violence perpetuated by well known Economic Freedom Fighters (EFF) leader Malema, has South Africa flagged on Genocide Watch at stage 6 within the 10 stages of Genocide.

It is an issue that most Europeans don't have any knowledge about what became clear over The White Genocide Project activists held a rally in Sydney, Australia recently.  The rally was heckled by numerous racist extremists who are ignorantly promoting their own genocide.

For more information about the rally and plight of South Africans please see these articles:

South Africa:  Where Corruption, Rape, and Murder Are Normal.  The unthinkable is now the reality.  Only in Africa?

Those who have taken our land must not be arrogant:  Malema

We are urging all our readers to sign this petition to allow all white South Africans the right to return to Europe.  The petition hosted on Change.org was started by Rodrigo Herhaus de Campos who argues:

The idea that white South Africans have the right to return to Europe is based in the concept of indigenous rights and self-determination.

The white South African population currently faces ethnic cleansing and persecutions at the hands of the African National Congress (ANC) government, the Economic Freedom Fighters (EFF), and various individual anti-white aggressors.  Over 4000 white farmers have been brutally murdered, often including torture and rape and mutilation.  Many white South Africans today live in poverty and squalor as a consequence of the ANC government's Black Economic Empowerment policy which shuts whites out of the labor pool. 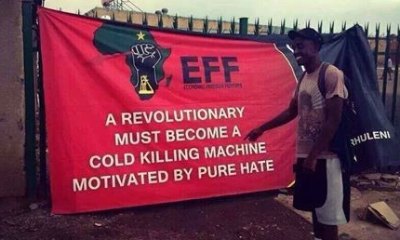 Also, this would extend to whites in Zimbabwe and Namibia, given that they face a similar situation.  But white South Africans are the largest population group of whites in southern Africa by far, so that is why the name of this petition references them specifically.

If you are a white person living South Africa and you are scared for your life and future, we suggest considering you fly into Turkey and cross into Europe as an illegal immigrant.  If you can make it into Germany you can then request residency.  Another alternative is to fly into Mexico and then cross the border into the US where you can then also request residency.  If just one member of your family is granted permanent residency or citizenship you can then bring the rest of your family across as well.

This issue can no longer be swept under the rug - we need everyone to be made aware of the current climate so changes can be made before all out extermination begins.