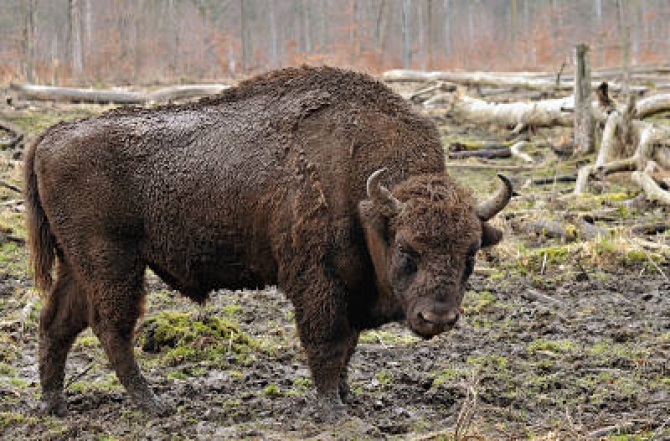 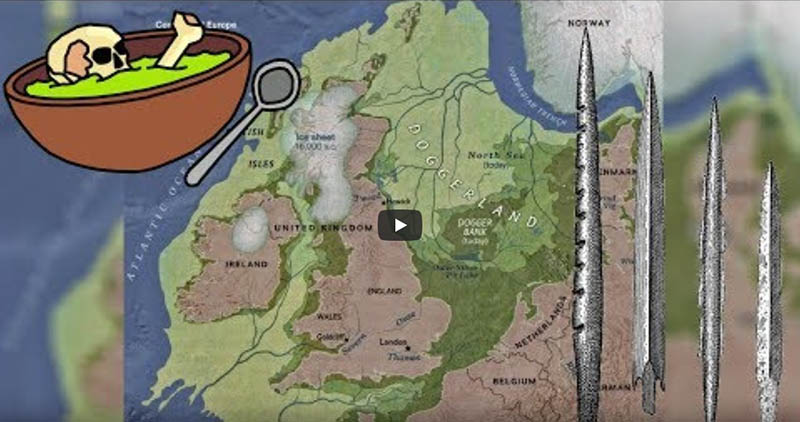 And the animals below roamed over these lands with white European Ice Age hunters, there were no nations as we know today, no country called Ireland, Brittan, Germany, Russia, Spain, yet there were nations, tribal nations. These are groups of people who came together who controlled, protect their members of the community and hunting areas from other tribes. This would have occurred from the first people that moved into Europe

The Animals below are the Animals they hunted and some of these animals, Bears, Lions hunted some of these human hunters. We must remember that wolves lived during this period would have most likely hunted man when given the opportunity, but over the centuries we wiped out these particular wolves and the ones that walk among us today are the timid ones.

Picture taken from above video.

What can Stone Age art tell us about extinct animals?

Many Europeans (Whites) know very little about the animals their ancient ancestors hunted and the following images can help in remedying this. There were a diverse number of animals that European Caucasians hunted throughout the Ice Age including Bison, Wild Horses, Cave Lions, Cave Bears, Wolves, Wild Cattle, Red Deer, Roe Deer, Fallow Deer, Beaver and Mammoth Elephants.

The animals of Europe are very similar to, or the same as animals found in North America.  Europe also has Beaver, Lynx, as well as a number of deer including Reindeer, Elk (known as a Moose in USA and Canada), Black and Brown Bears, White Swans, Hares and Rabbits, Wolverines, Stout and Weasels.

Europe's animals have had some irreversible extinctions including the Cave Bear, Woolly Mammoth, Woolly Rhinoceros and Giant Deer.  Scientists have spent considerable time on re-wilding initiatives in Europe with plans to reinvigorate the megafauna populations.  They have successfully reintroduced European Bison (pictured right).  In the Ice Age bison lived on open tundra, today they live in forest areas and during the First World War the numbers were decimated and only through careful and selective breeding have their numbers risen to roughly 3,000 today. 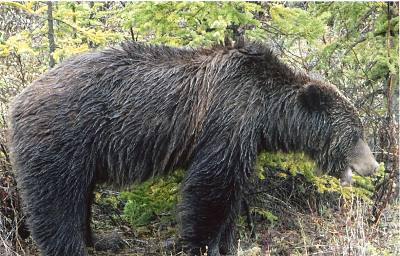 They have also successfully brought back the Musk Oxen into Scandinavian regions.  The Brown bear (pictured left), are found in North America, and Europe. 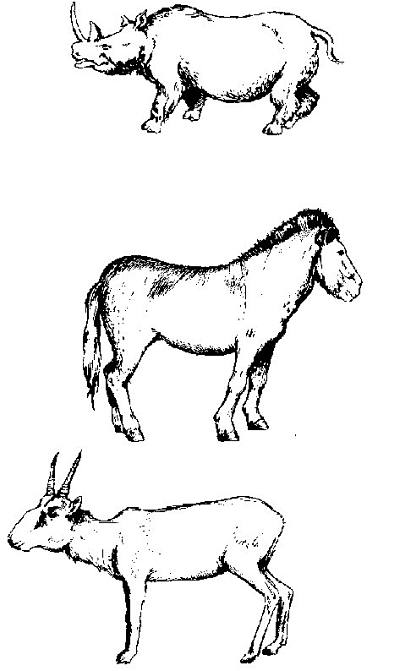 The Permafrost of Siberia in Russia Hides the Mummified Remains of Ice Age Animals.

The thick permafrost in Russian Siberia hides the mummified remains of ice age animals. In some cases, entire buried carcasses that have been shrunken and desiccated down to a natural mummified state have been dug up. Here are 10 such frozen mummies that tell us how these animals lived and looked during the Ice Age.

"Did you ever wake up from a long nap feeling a little disoriented, not quite knowing where you were? Now, imagine getting a wake-up call after being "asleep" for 42,000 years."

Worms Frozen for 42,000 Years in Siberian Permafrost Wriggle to Life 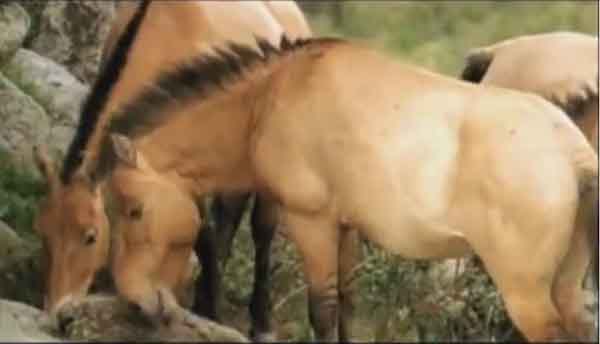 Przewalski Wild Horse Is a rare wild horse originally found in central Asia and was brought to Europe.  This horse looks identical to cave painting images of horses found in Europe. The following video gives information on the Przewalski horses in Europe and Asia.BBC QED Gallop to Freedom (Narrated by David Attenborough ... 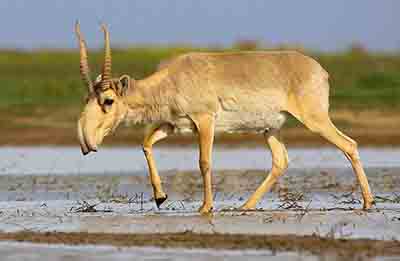 The saiga antelope (/ˈsaɪɡə/, Saiga tatarica) is a critically endangered antelope that originally inhabited a vast area of the Eurasian steppe zone from the foothills of the Carpathian Mountains and Caucasus into Dzungaria and Mongolia.

They also lived in Beringian North America during the Pleistocene. Today, the dominant subspecies (S. t. tatarica) is only found in one location in Russia (in the Republic of Kalmykia and Astrakhan Oblast) and three areas in Kazakhstan (the Ural, Ustiurt, and Betpak-Dala populations). A proportion of the Ustiurt population migrates south to Uzbekistan and occasionally Turkmenistan in winter. It is extinct in the People's Republic of China and southwestern Mongolia. It was hunted extensively in Romania and Moldova until it became extinct in those regions at the end of the 18th century. The Mongolian subspecies (S. t. mongolica) is found only in western Mongolia.[3][4

During the last glacial period, the saigas ranged from the British Isles through Central Asia and the Bering Strait into Alaska and Canada's Yukon and Northwest Territories. By the classical age, they were apparently considered a characteristic animal of Scythia, judging from the historian Strabo's description of an animal called the kolos that was "between the deer and ram in size" and was (understandably but wrongly) believed to drink through its nose.[18]

The saiga antelope. A species with a challenging existence. 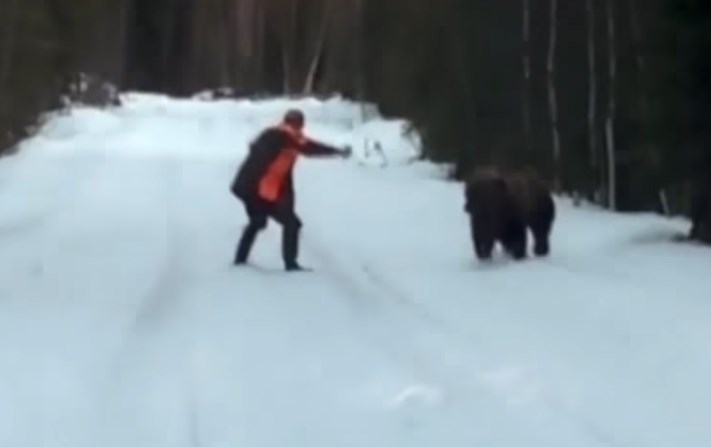 Swedish man scares the living shit out of an attacking bear 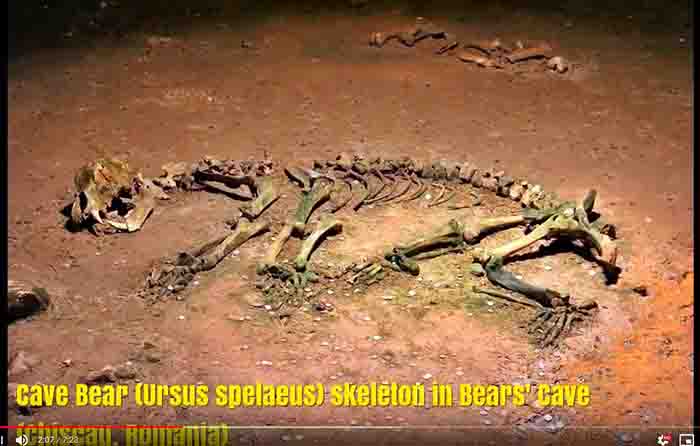 "The cave bear (Ursus spelaeus) was a species of bear that lived in Europe and Asia during the Pleistocene and became extinct about 24,000 years ago during the Last Glacial Maximum. Both the word "cave" and the scientific name spelaeus are used because fossils of this species were mostly found in caves. The cave bear's range stretched across Europe; from Spain and Great Britain in the west, Italy, parts of Germany, Poland, the Balkans, Romania and parts of Russia, including the Caucasus; and northern Iran."

"Between the years 1917 and 1923, the Drachenloch cave in Switzerland was excavated by Emil Bächler. The excavation uncovered more than 30,000 cave bear skeletons. The unusual finding in a deep chamber of Basua Cave in Savona, Italy, is thought to be related to cave bear worship by Neanderthals, as there is a vaguely zoomorphic stalagmite surrounded by clay pellets." 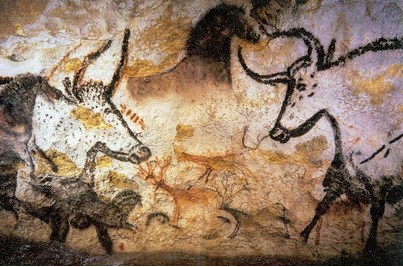 Auroch Wild Cattle
Picture on the right  showing wild Cattle and horses was painted over 15,000 years ago by Ice Age Europeans, and this cave complex can be found in Southwest France and contains some of the most remarkable Palaeolithic cave paintings in the world.
Extinction of Aurochs || Facts & Photos || Everything you want to see and know
Aurochs:Cows as big as elephants may soon roam Europe 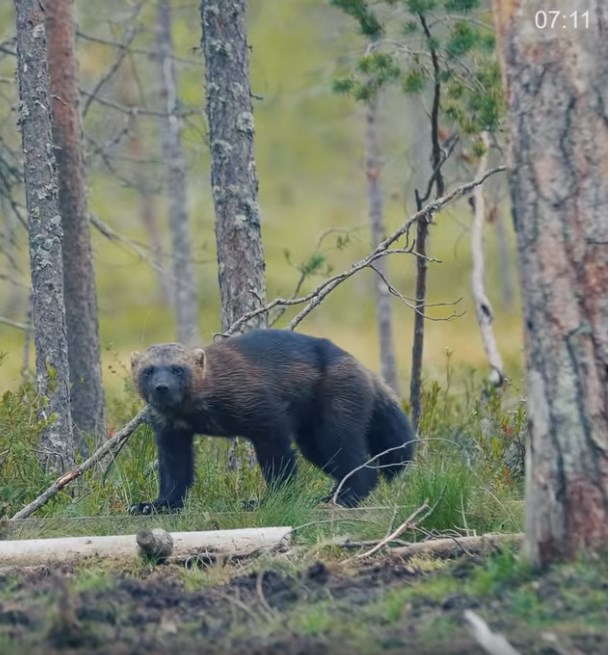 A day in Finland for the Wild Wolverine. GH5 4k.
Wild Wolverine filmed from Lake/Paradise/Forest Hide at Wildlife Safari Finland. My attempt to show the day of the Wolverine which are very afraid of Bears and mostly come when it is dark to eat before the Bears comes. 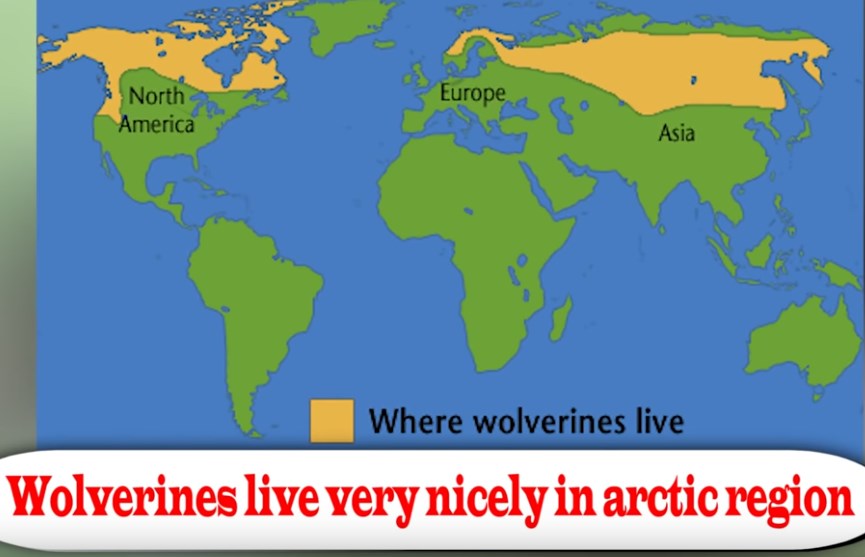 Tim Campbell 8 months ago
Fact #1 The wolverine doesn't know what it is to lose a fight.
Amazing Facts About Wolverines 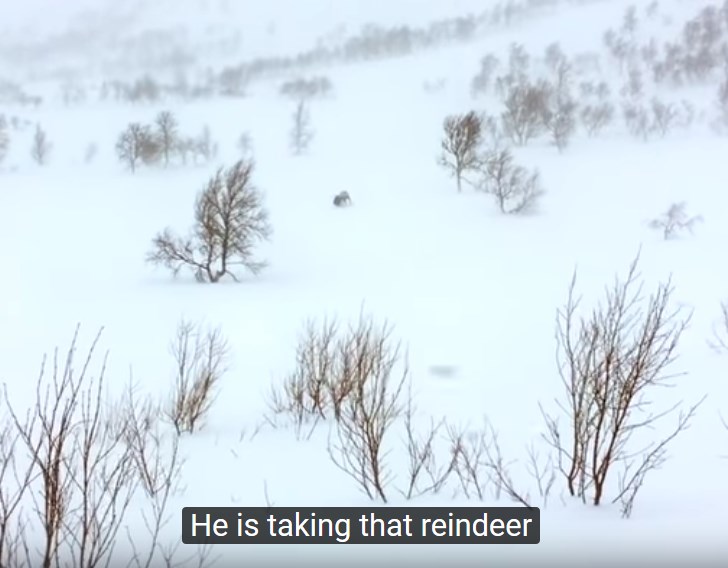 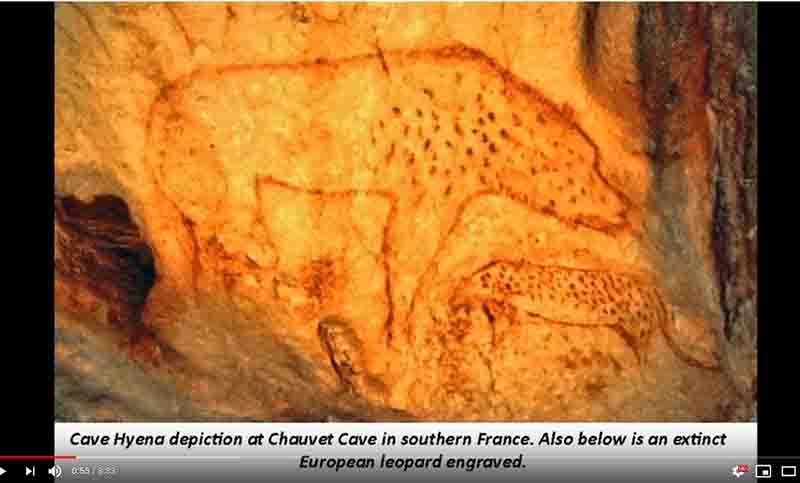 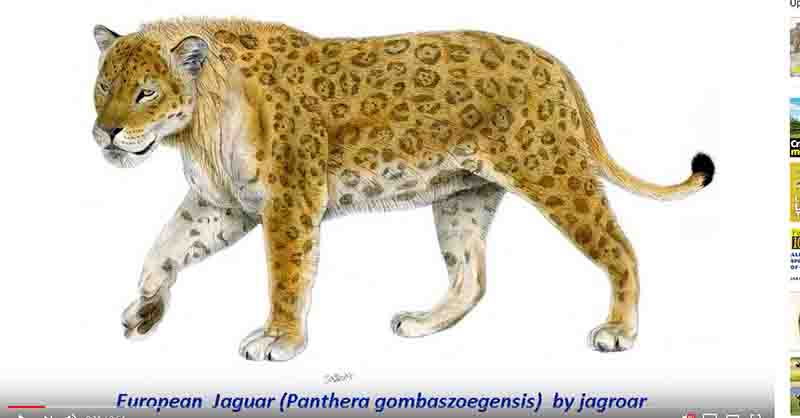 Europe's Most Primitive Big Cat That Once Roamed Much Of Continen 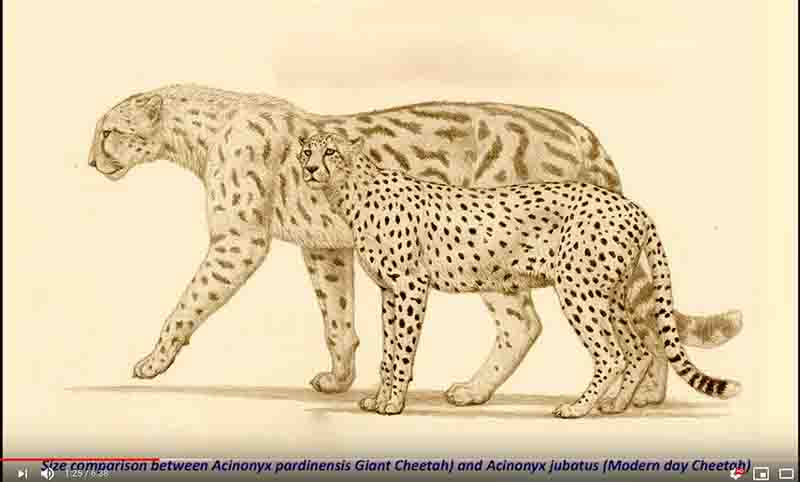 "When modern humans first wandered into Europe some 50,000 years ago, this snaggle-toothed cat was there to greet them.

Painstaking genetic analysis of a jawbone dredged up from the bottom of the North Sea has now confirmed the theory that the so-called scimitar cat Homotherium latidens lived in Europe much longer than previously believed.

Until recently, the earliest fossil of a Homotherium in the region dated to about 300,000 years ago, and many paleontologists had assumed that’s when the large cat went locally extinct." 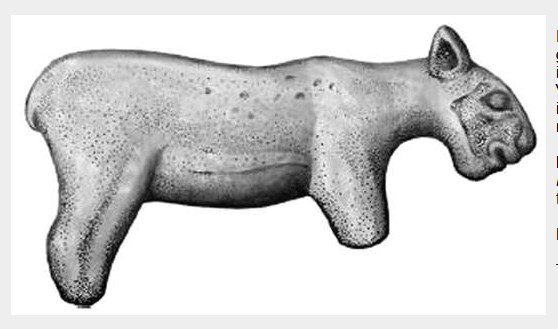 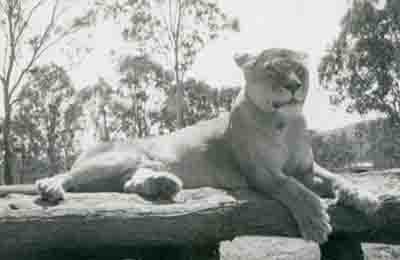 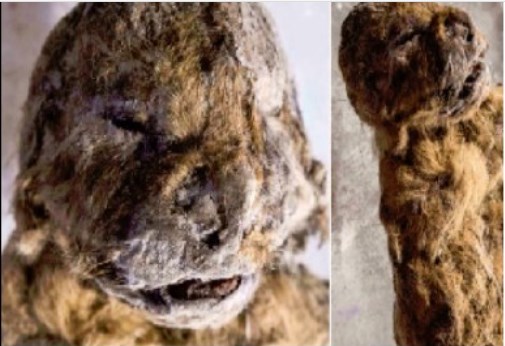 Ice Age Lion to be Cloned By Scientists 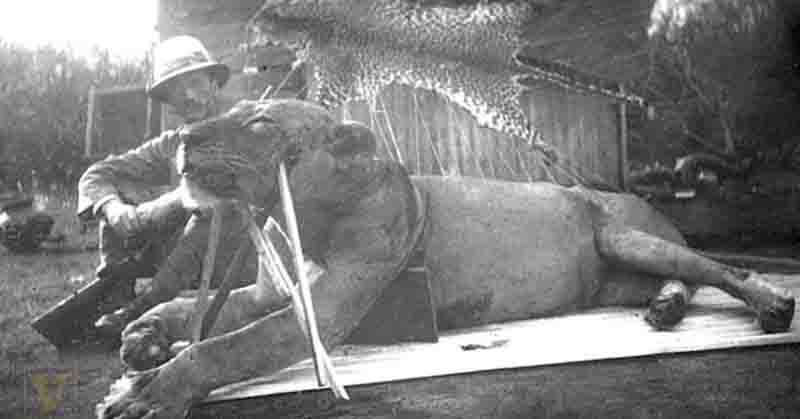 An analysis of the microscopic wear on the teeth of the legendary “man-eating lions of Tsavo” reveals that it wasn’t desperation that drove them to terrorize a railroad camp in Kenya more than a century ago.

It's been proven in recent years that after testing the skulls that they didn't kill anywhere near 135 people. One lion killed roughly 40 people and the other about half of that. Both of the lions' had missing canines so they couldn't hunt their usual prey. The cave from the movie was a burial site, not a den where the lions lived and ate. Their skulls and hides are in the Fields Museum in Chicago. Great movie but a lot of liberties were taken to make it seem much worse than the truth. 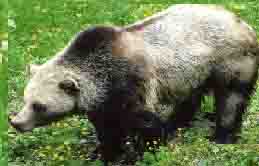 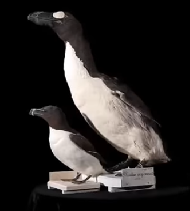 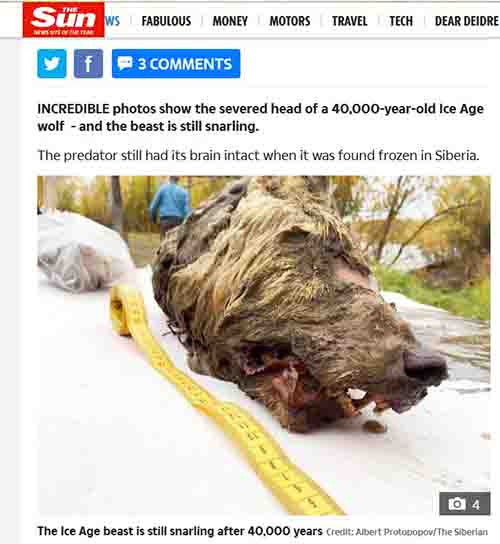 The severed head of a wolf that died about 40,000 years ago has been found in Siberia perfectly preserved in the Siberian permafrost.

Russian scientists have found the furry head of an Ice Age wolf perfectly preserved in the Siberian permafrost.

The head, which died 40,000 years ago, was discovered in the Russian Arctic region of Yakutia.

Valery Plotnikov, a top researcher at the local branch of the Russian Academy of Sciences, said the animal belonged to an ancient subspecies of wolf that lived at the same time as the mammoths and became extinct alongside them.

Scientists said it was an adult, about 25 per cent bigger than today's wolves, but did not say whether it was male or female.

Mr Plotnikov called the discovery unique because scientists previously only had found wolf skulls without tissues or fur, while this head has ears, a tongue and a perfectly preserved brain. END

Wolves in Chernobyl Dead Zone
Wolves and other wildlife are living in the 30km 'dead zone,' which still surrounds the remains of the reactor in the city of Chernobyl near Belarus. This video shows bison, wild horses, beavers, bears, lynx and wolves that were hunted by Europeans many centuries ago

Brown bear hunting
Bear hunting has long traditions in Scandinavia. It is a very thrilling hunt, but maybe not suitable for anyone.  You've got to have guts!

The Best Moose Documentary EVER. 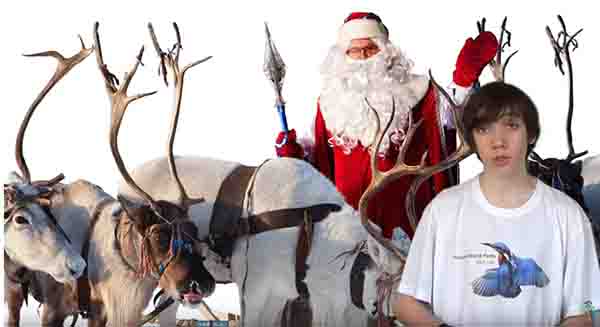 The scoop on reindeer! 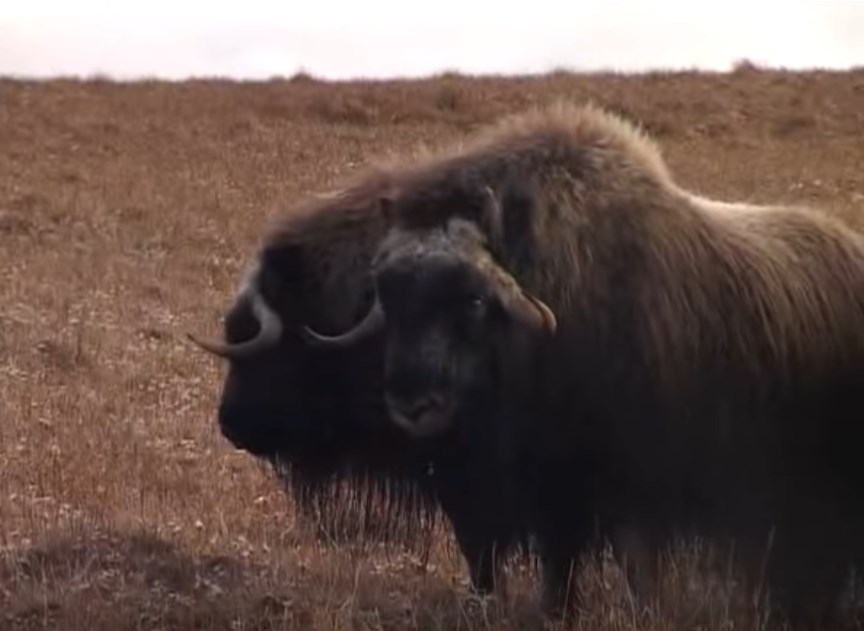 The Return of the Musk Ox HD 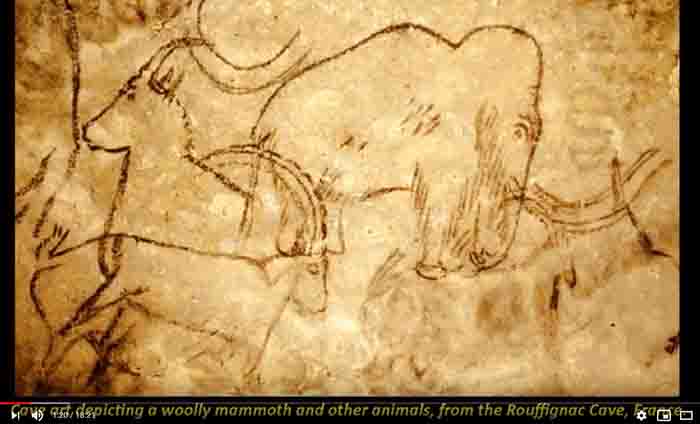 Woolly Mammoth || Can We See Them Roaming On This Earth Again ? 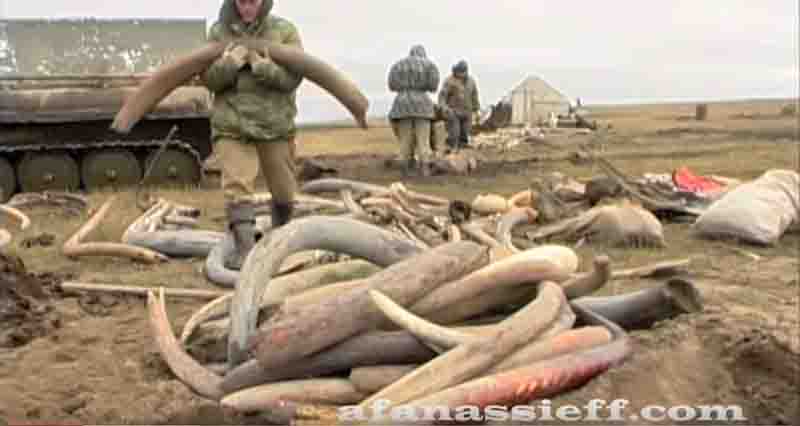 Netflix, Attenborough and cliff-falling walruses: the making of a false climate ico...

This film follows a young bumblebee-queen through a year to experience the life of these little furry beasties.

" David Attenborough is in the Swiss Jura Mountains to discover the secrets of a giant. Beneath his feet lies a vast network of tunnels and chambers, home to a huge empire of ants. It is believed to be one of the largest animal societies in the world, where over a billion ants from rival colonies live in peace. Their harmonious existence breaks many of the rules for both ants and evolution, and raises some important questions."

Attenboroughs and the Empire of the Ants 2018| Ant Documentary| BBC

Where the Wild Things Were

"In Bohemia, at the very heart of Europe, south of the Golden City of Prague and guarded by medieval castles, lies a hidden mosaic of lakes and gently flowing rivers, of misty forests and mysterious peat bogs."

This important wetland, shaped both by nature and man, is a magnet for plant, animal life and blue frogs and carp fist are caught for eating.

Bohemia - A Year in the Wetlands - The Secrets of Nature

"The wide, often untouched wilderness of the Baltic hinterland is home to many animals. More than 350 brown bears live in the primeval forests of Alutaguse. In the spring, the Soomaa National Park transforms into a huge lake. Europe's widest waterfall is located in Latvia. In the beginning of May, vimba bream follow the course of the River Venta.  More than 1000 wolves go on the hunt in Latvia's forests"

The Baltic forest and moorland

Images courtesy of Wikipedia and The Coveners League

More in this category: « How Successful People Think Fighting Against Genocide Archives »
back to top