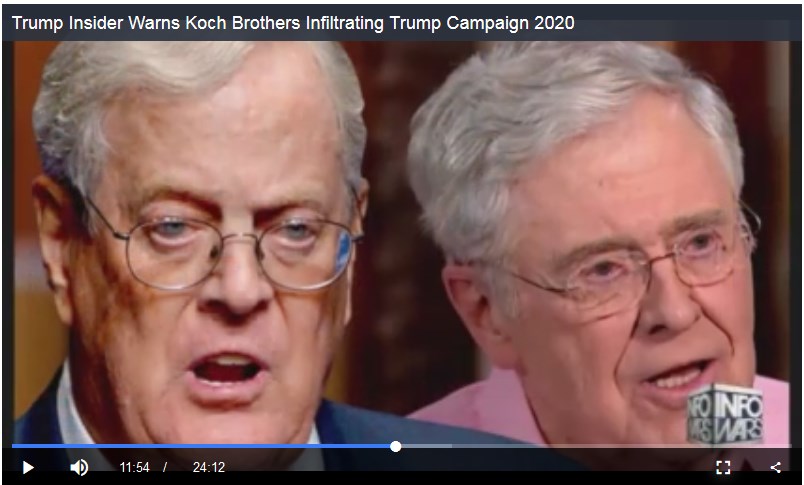 Fred Chase Koch (/ˈkoʊk/; September 23, 1900 – November 17, 1967) was an American chemical engineer and entrepreneur who founded the oil refinery firm that later became Koch Industries, a privately held company which, under the principal ownership and leadership of Koch's sons, Charles and David, is listed by Forbes, as of 2015, as the second-largest privately held company in the United States.[2][3]

In 1928, Koch traveled to the Soviet Union to build oil refineries, but he came to despise communism and Joseph Stalin's regime.[6][25] Koch self-published a 39-page, anti-communist pamphlet "A Business Man Looks at Communism" relating his experiences in the Soviet Union and warning of the threat of Communist take-over.[26][27]:46 Koch wrote that one of the "Potential Methods of Communist Take-over in U.S.A. by Internal Subversion" was "Infiltration of high offices of government and political parties until the President of the U.S. is a Communist...Even the Vice Presidency would do as it could be easily arranged for the President to commit suicide."[22][27]:46[28]:12 Koch wrote that "socialism is the precursor to communism."[26][28]:27 Koch wrote that he found the Soviet Union to be "a land of hunger, misery, and terror".[11][28]:5 Koch wrote that he toured the countryside and received what he wrote was a "liberal education in Communist techniques and methods."[11][28]:5 Koch grew persuaded that the Soviet threat needed to be countered in America.[11] 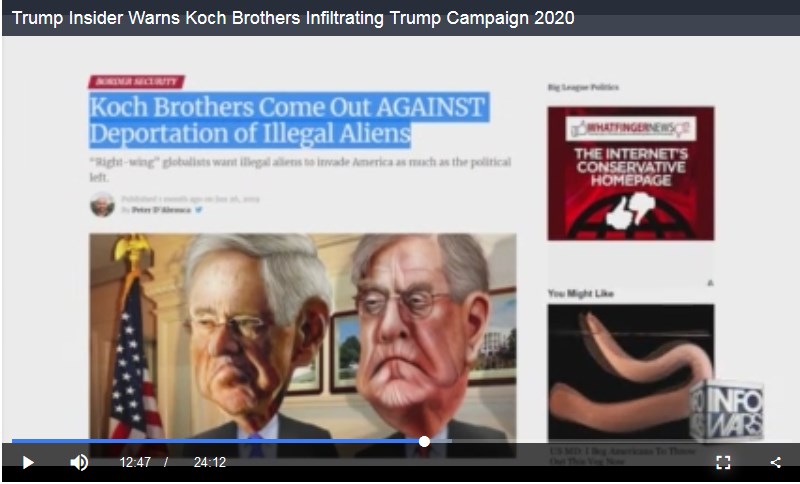 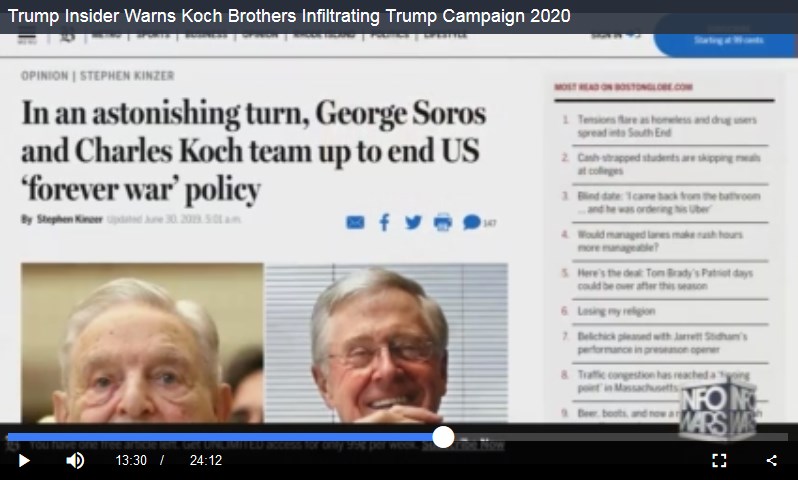 Koch Brothers Exposed is a 2012 U.S. documentary, compiled by liberal political activist and filmmaker Robert Greenwald from a viral video campaign produced by Brave New Films, about the alleged political activities of the Koch brothers. Wikipedia

@Brave New Films  - I just saw "Koch Brothers" documentary. It was a good film, my problem is how obvious this channel is leaning towards the left when in reality both sides are bought and work for the same corporations, big banks, military industrial complex, and various other special interest. George Soros is the Left wings "Koch Brother". I can guarantee I'm more left wing then you can imagine (who ever reads this) I'm not some right wing religious nut. This documentary was great and informative but obvious propaganda because it does not talk about all the money involved in politics but solely focuses on ONE of the right wing special interest group's when there's many more, some of which are overlapping special interest groups that also fund the left wing ...

Our solution would be new political parties that challenge the current establishment.

Solution Globally: (Would be called Radical)

Or my personal favorite (very far left radical idea) as one of the signs in that documentary said "Occupy Earth", global revolution, create a new system of abundance, global unity and synergy. Ever heard of Jacque Fresco or the Venus Project? Peter Joseph of the Zeitgeist Movement? That would be a good template on how to start thinking on how we could figure out a new global system. Down with a monetary system and the rise of a resource based economy (RBE).

Just as my YouTube profile picture shows/says. Obama/Mitt Romney "They all still think we are different" (and then high five each other) aka Republican/Democrat = same shit.

It's pretty simple to fix, bring in a law like Australia did making campaign donations capped at 200,000 dollars per campaign for individuals or companies and make campaign finances 100% transparent and viewable for all people.

Summer 2019: a Koch Foods plant got slapped with several million in fines for sexual assault and extortion of the many non-citizen workers. 3 years later, they were still getting sued, so ICE came and arrested 700 workers at that plant this summer. Problem solved for free by the U.S. government.... :-/

We no longer have free market capitalism and we no longer have a democracy!   We have Crony capitalism! Koch brothers vision for America!   The Koch Brothers and their Right-Wing Cronies Are Turning America Into The Twilight Zone.   Capitalists believe in private profits, public costs... They get the profits, the rest of us taxpayers get to pay the bills!