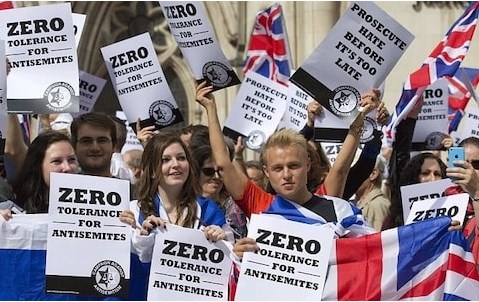 Jews are infiltrating the “right wing” parties, claiming to be “anti-immigrant” now that the damage is done.

After aiding and abetting the flooding of Europe with non-White Muslims and Africans, Jews are flip-flopping and infiltrating the “right wing” parties, claiming to be “anti-immigrant” now that the damage is done:

Marine Le Pen, leader of France’s right-wing political party, National Rally, is courting Jewish leaders, assuring them that she will not tolerate anti-Semitism in her party. She is not alone among Europe’s political parties on the Right side of the political spectrum in making an effort to bring the continent’s Jews into their political coalitions.

And an increasing number of Jews are open to their overtures.

With a rising tide of anti-Semitism in Europe, largely fueled by Islamist extremists among the flood of Middle Eastern immigration into the continent, and with violent assaults on Jews across the continent, many Jews have either left or are considering doing so. Almost 60,000 Jews have left France in just the past decade.

For those who choose to stay, moving closer to political parties that are in opposition to the pro-immigration policies of Europe’s elitist and globalist parties is an option more and more Jews are willing to consider.

“I’m 69 and tired of being polite,” Emanuel Bernhard Krauskopf said, explaining his decision to start a Jewish chapter of the Alternative for Germany (AfD), an anti-immigration party that is the chief opposition in the German parliament. “I support a party that calls a spade a spade and really stands up for the Jews.”

In Austria, there are Jewish lawmakers who are members of the right-wing Freedom Party, and in Sweden, Jews are members of that country’s parliament, belonging to another right-wing party, the Sweden Democrats. Similar examples could be cited in the Netherlands, Poland, and Italy. In fact, Geert Wilders, the leader of the Party for Freedom in the Netherlands, is regarded as Israel’s strongest supporter in western Europe.

Sweden’s Paula Bieler, one of three Jewish members of that nation’s parliament that are in the right-wing Sweden Democrats, explained why. “Jews feel insecure in our country and talk about leaving because it’s not a safe place for them anymore. Much of the anti-Semitism comes from the immigrant community who bring the Middle East conflict here.”

In an apparent effort to demonstrate to Europe’s Jews that they are serious about the courtship, several right-wing political leaders have gone to Israel to develop friendly relations with the nation for which many Jews understandably have emotional ties. Le Pen of France, Italy’s Interior Minister Matteo Salvini, and Hungary’s Prime Minister Viktor Orban have all made the journey to visit Jerusalem.

This is not an example of how Jews encompass the entire political spectrum; rather, it shows how Jews change sides depending on how the political winds blow.  The so-called “neo-conservatives,” are hardly conservative — they are former Trotskyite jewish communists who pretended to be “conservative” so as to co-opt the right-wing military establishment and use it to support Israel.  And now that Europe has successfully become browner and less Christian, the Jews pretend to be worried about all the new antisemitism coming from these new Muslim immigrants for whom they openly advocated.

So now we see the “New Right” or “alt-Right” becoming top heavy with Jews, like Rebel Media or Breitbart, and goy sympathizers like Alex Jones, Tommy Robinson, and PJ Media.  The Jews have manipulated huge support from the conservative Right in America in regards to Israel, and now they want to control the anti-immigrant “far” Right, just to make sure that it doesn’t embrace antisemitism.  It’s kosher to now complain openly about immigrant crime and welfare cheats, but it’s not kosher to discuss the jewish hand in flooding White lands in the first place.

And the jewish controlled press is making it look like the Right is wooing the Jews to join them.  That’s the game being played here, and everyone keeps falling for it.