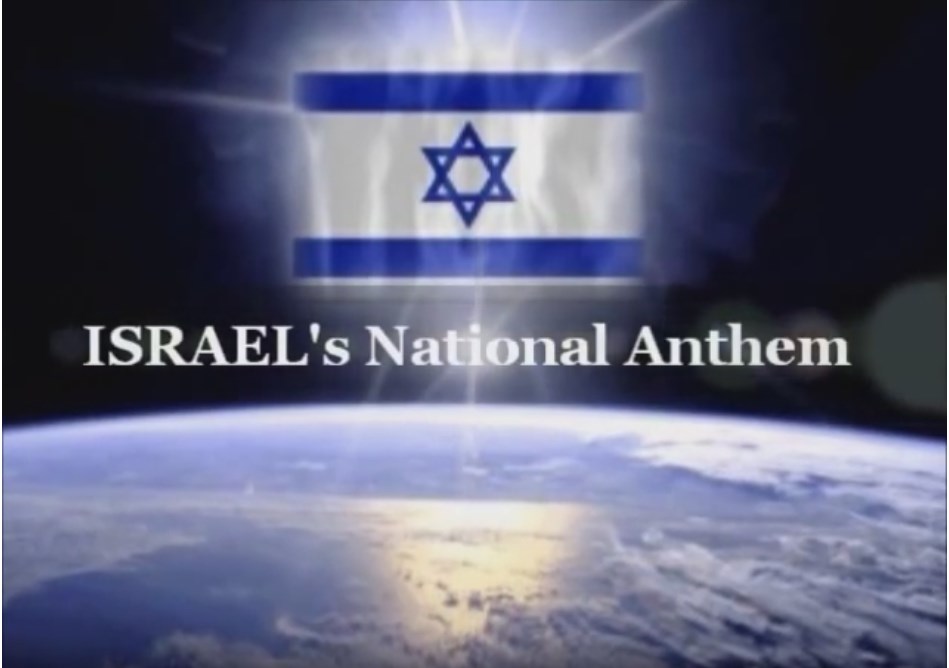 We support the country of  Israel and have been wanting to write this article about Israel and the way this country is governed. The reality is, Israel is established and is not going to disappear or submit to pressure to relinquish land to Palestinians at any point in the near future. We do support a Palestinian State. While we support the people of Israel, we do not agree with every facet of the Israeli government.  There are many concepts that work very well in Israel and we think Western countries should consider adopting, and we will write more about Israel sometime soon.

Israel (/ˈɪzriəl, ˈɪzreɪəl/; Hebrew: יִשְׂרָאֵל; Arabic: إِسْرَائِيل‎), also known as the State of Israel, is a country in Western Asia, located on the southeastern shore of the Mediterranean Sea and the northern shore of the Red Sea. It has land borders with Lebanon to the north, Syria to the northeast, Jordan on the east, the Palestinian territories of the West Bank and Gaza Strip[18] to the east and west, respectively, and Egypt to the southwest. The country contains geographically diverse features within its relatively small area.[19][20] Israel's economic and technological center is Tel Aviv,[21] while its seat of government and proclaimed capital is Jerusalem, although the state's sovereignty over Jerusalem has only partial recognition.[22][23][24][25][fn 4]

Israel is a constitutional Republic

Israel is a constitutional Republic- not quite on par with the USA, but way more good than bad- a mixture of American and British systems and there are Muslim members in the Israeli Parliament. 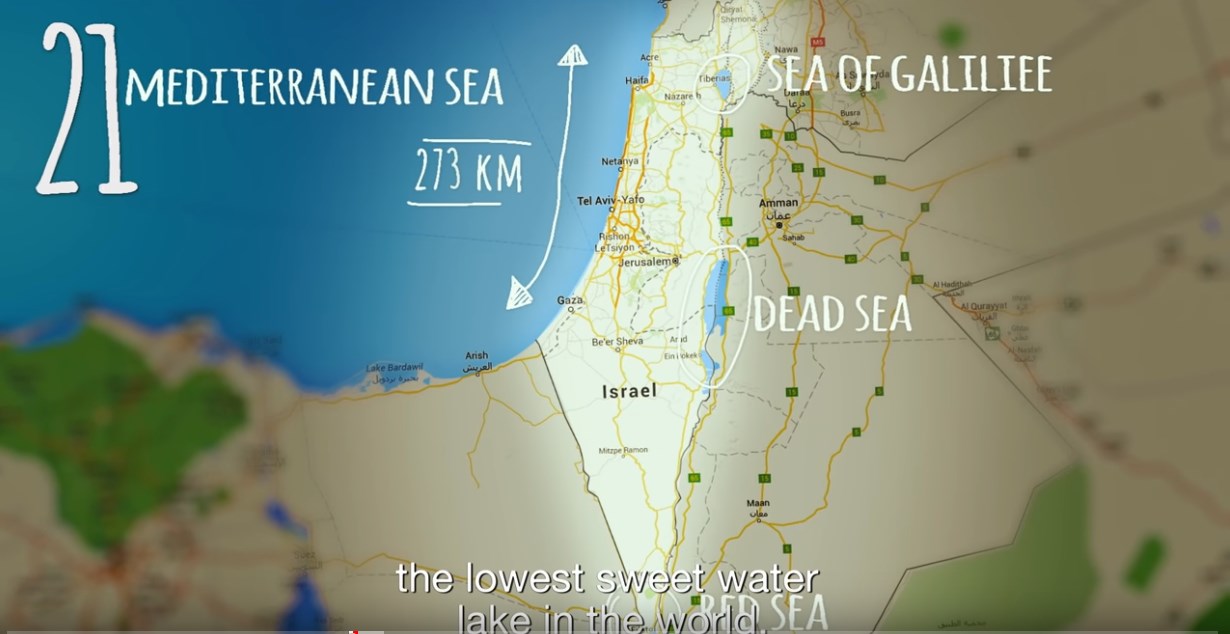 Israel
Published on Apr 29, 2012
http://www.israel.org Israel, a small country of outstanding beauty, is so many different things: It is a bridge between Africa, Asia & Europe, It has pulsating urban life, breathtaking nature, an abundance of plant & animal species, Thousands of years of fascinating history, a rainbow of cultures and traditions. Israel offers an energizing experience with a vibrant cultural scene, and is proud to be an innovative leader in science & High-Tech. Sounds too much? you'll believe it when you see it. Visit the MFA's Social Media Channels: Facebook - http://www.facebook.com/IsraelMFA http://www.facebook.com/IsraeliVibe Twitter - http://www.twitter.com/Israel http://www.twitter.com/IsraelMFA Please credit the MFA and the creators of this clip for any use of this video. Photographer and Editor: Eyal Bartov Additional Photographs: Samuel Magal After Effects: Gili Ittah Original Music: Israel Kasif

Joseph Wouk
Published on Jul 6, 2017
A well made doc of the 6 day war with emphasis on the intelligence aspects. These include the only capture by the West of a complete MIG 21.

From "Greatest tank battles" TV show. In 1973, Syria launches a surprise attack against Israel in the Golan Heights.This is a story of survival, where a few out-numbered tankers manage to hold off an enemy of overwhelming size in one of the greatest tank battles ever waged. 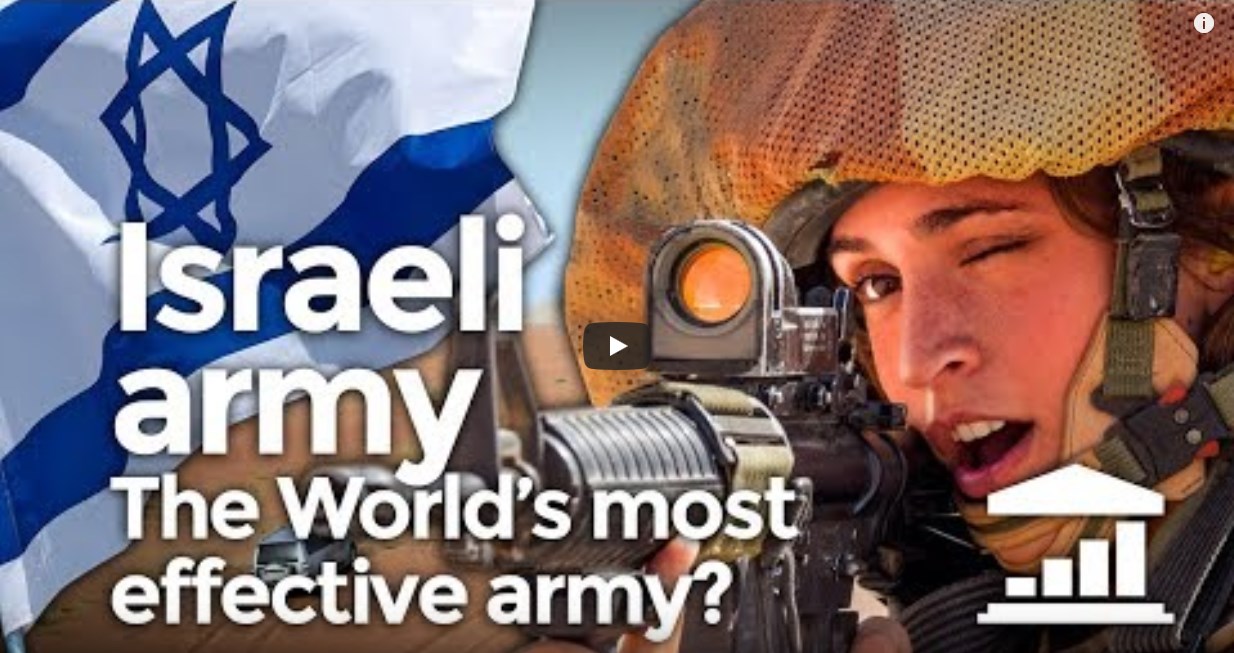 " Why is the Israeli army so powerful? What are the key elements explaining such a military success? Today we are going to tell you the 5 key facts that explain this".

Why is the ISRAELI ARMY so POWERFUL? - VisualPolitik EN 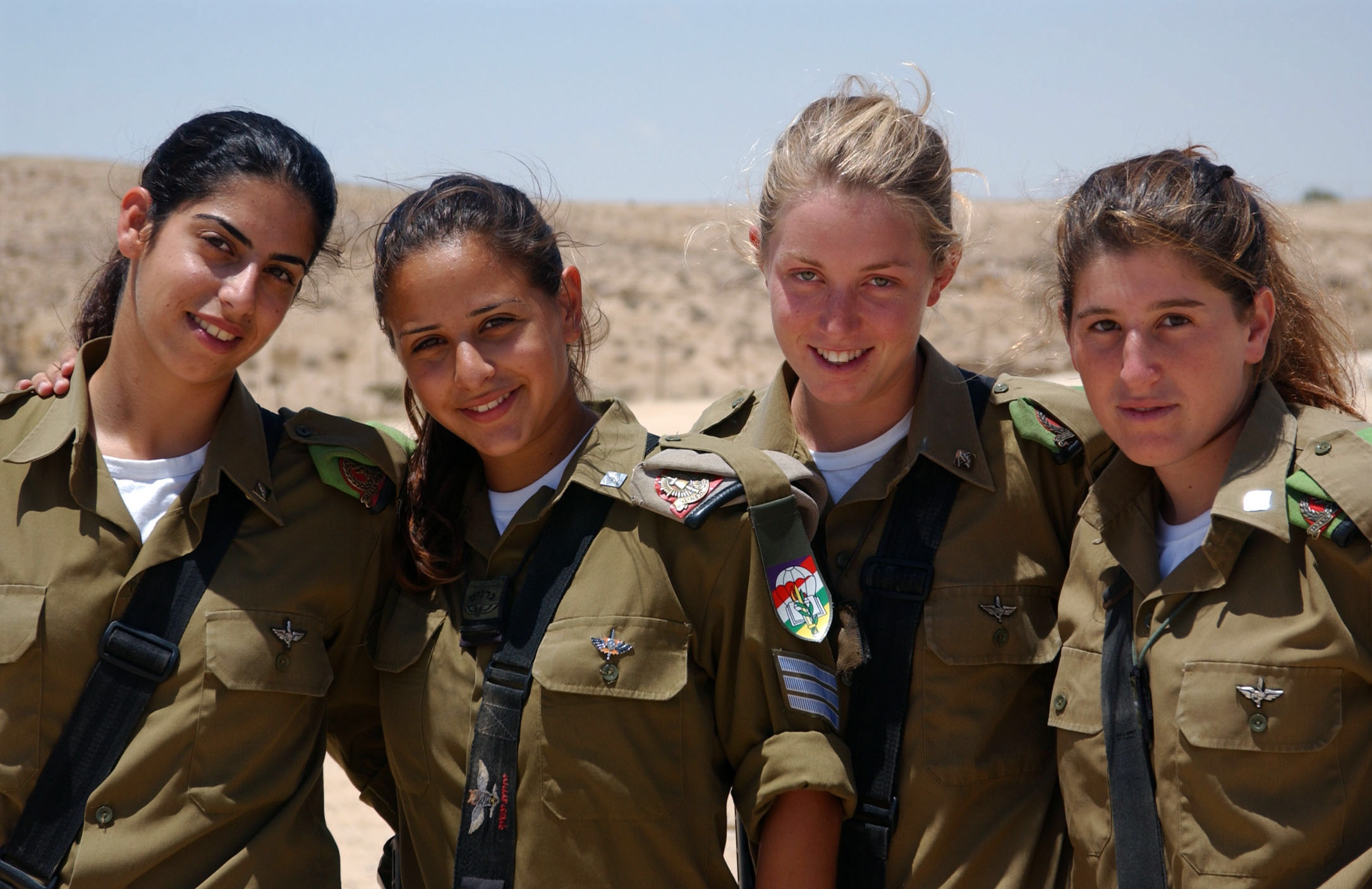 Since its early days as a fledgling State, the Israel Defence Force was given authority to enlist any citizen from 18 years of age.  Under their law, both men and women had to serve for a minimum period.  Men - 3 years and 2 years for women.  There are a number of reasons Israeli citizens can be exempt from service which include medical problems, religious study and criminal records to name a few.  Today, many citizens choose to stay after their initial conscription and the military becomes their career and livelihood.

Upon evaluation, each person is given a medical profile which determines where they will serve.  The highest grade profiles are placed in one of five infantry brigades, field, and combat intelligence units or can serve as combat engineers.  Other roles include artillery, military and border police, Aman, logistics corps, adjutant Corps and more.

Women in the Army

Israel is one of the few countries that has mandatory conscription for women into their armed forces.  While it is still mandatory, there are more reasons for an exemption available to women including religious conscience, pregnancy, marriage and motherhood.

Currently, 65% of women serve in the army, 25% choose to opt out on religious groups and the remaining 10% are exempted due to marriage and family or physical/emotional reasons.

Judaism Divided (1998) - The gulf between ultra-orthodox and secular Jews is threatening Israel’s stability more than their conflict with the Arabs. Subscribe to Journeyman for news and science reports every weekday: http://www.youtube.com/subscription_c... In a suburb of West Gaza, an orthodox community are outraged by the habits of their secular neighbours. “They walk with cleavage in front of people who need to observe modesty.” Liora and her secular neighbours complain of a recent incident when a Rabbi barged into her house and broke her stereo. The tension peaks at the Western Wall - an unholy battleground wher

Jews Have Right to Self-Determination 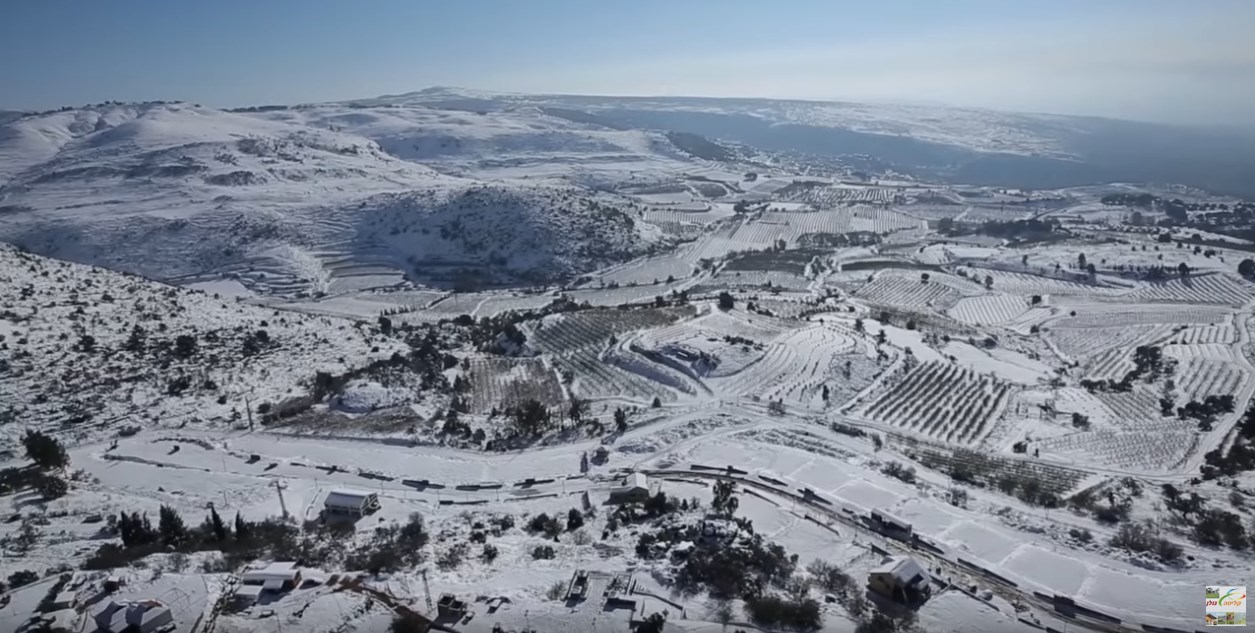 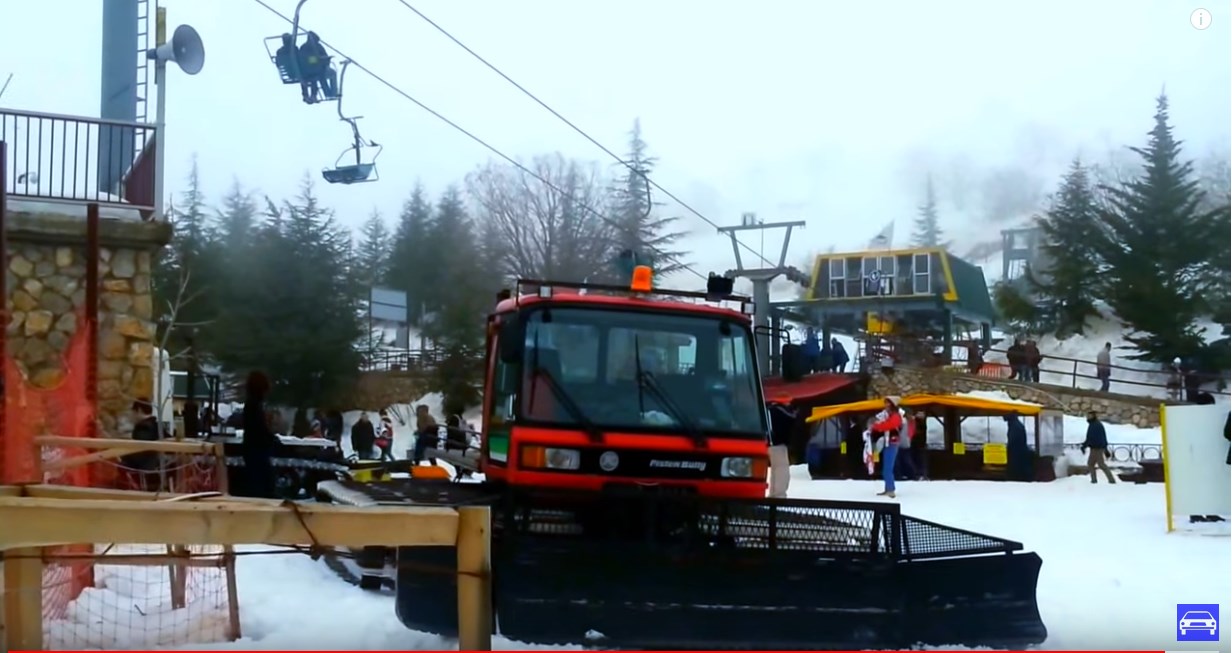 Gordon Robertson looks at Israel's remarkable agricultural innovation, with special focus on the role of the kibbutz in Israel's agricultural success, growing crops and orchards in desert, rocky land and swamps with hard work and ingenuity.

Made in Israel: Agriculture 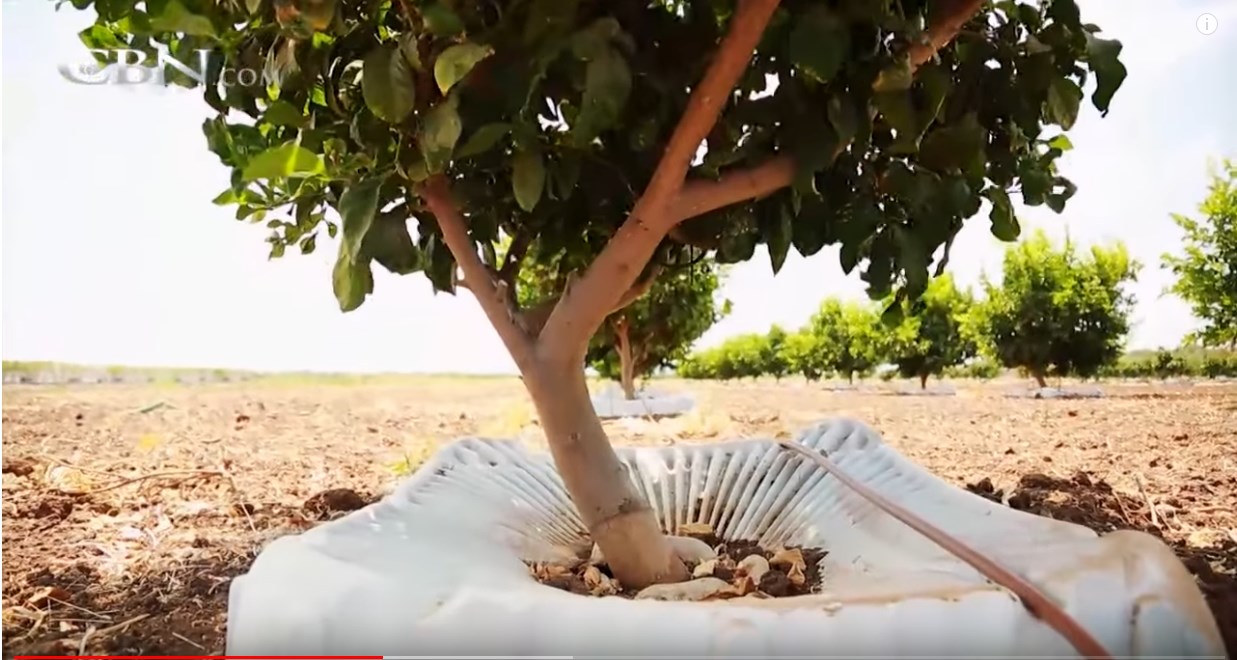 Because more than half of Israel is desert, the lack of clean water is a life-or-death issue. Gordon Robertson examines several of the ways that Israel conserves water, including desalination, drip irrigation and recycling.

Made in Israel: Water 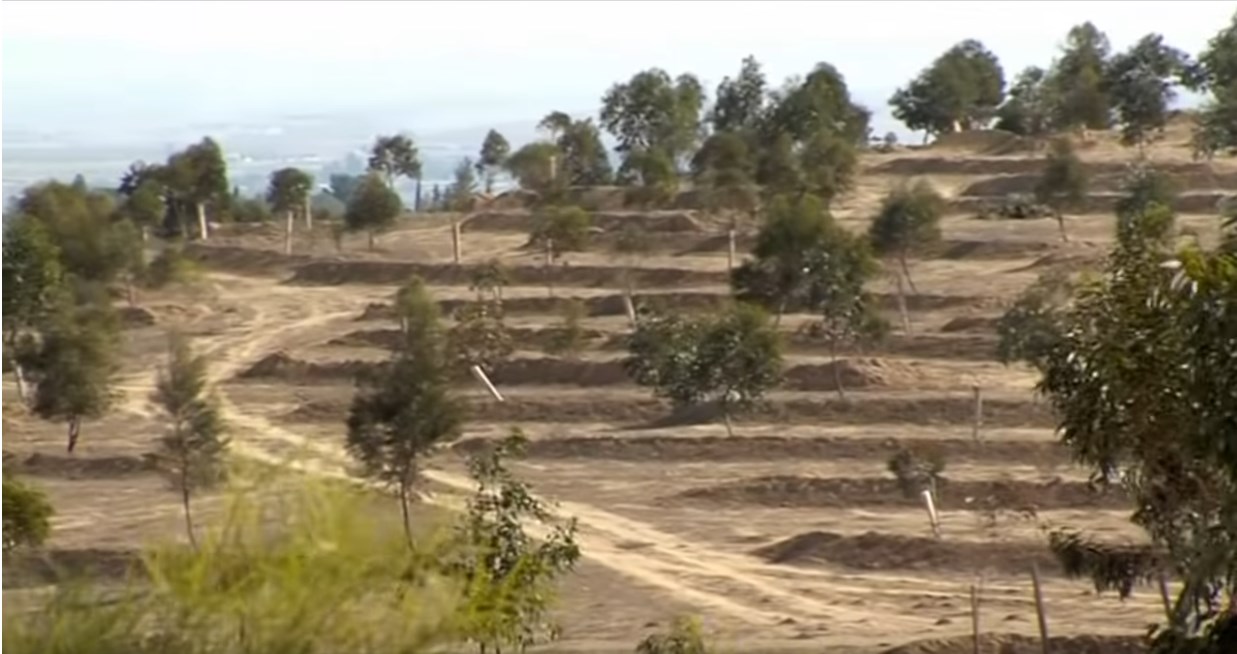 Planting Trees - Pushing Back the Desert

How do you push back centuries of desertification? Through planting trees in the desert, of course! Learn how KKL-JNF helps trees survive in the desert. Find out more about 'Green Sunday', a JNF Australia initiative that encourages Jewish Australian youth to get involved in planting a green belt around Beer Sheva. http://www.kkl.org.il/eng/about-kkl-j...

Goats & sheep are part of the cause of desertification. The shape of their mouth lets them nibble exposed plant stems down to the bare soil, and it can not recover and dies. Need to put an end to free-roaming sheep/goats, and enforce managed rotational grazing with permanent fencing, so protected fenced plants have time to recover after grazing.

If left unchecked, the sheep will eat every little sapling that ever tried to sprout.

A problem with mass plantings everywhere is that only one or a very few different types of trees are planted. When disease hits, most of the trees are lost in that kind of tree. Plantings should be of every sort of tree feasible in any given area where they can grow. Through diversity of trees, wildlife does much better. Where only one or a few kinds of trees are planted, food sources for birds and other wildlife often do not do well. I don't know about what kind of trees are being planted here, but the pictures all looked the same. I will look it up and see what it is from the comments.

When the grand turk of Turkey realized rebels were running into the forests to hide, he ordered a tax on every non-food producing tree. All across the empire, trees were burned off. the Fertile Crescent had good grazing for two years, then the rains stopped. When the Jews came home to Israel, they realized for the first time why Moses was told, when you get to your new land, plant trees. Before the Turk, the forests were so thick, a man had to walk sideways at times to get between them. You're bringing back the trees, something sacred to God. Be forever blessed for that. You walk in beauty. 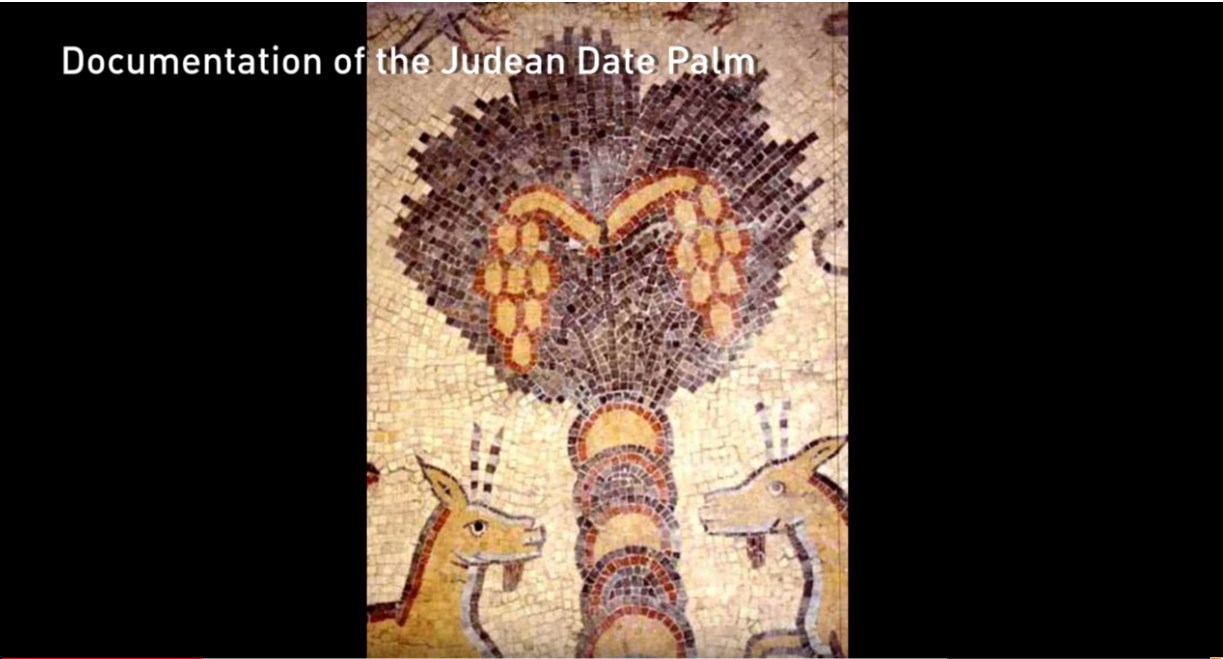 2,000 year-old seed brought back to life

Methuselah, the Judean Date Palm – links the past to the present through agriculture and archeology. One of the world's most ancient species, it is being revived after 2,000 years at the Center for Sustainable Agriculture in Israel. 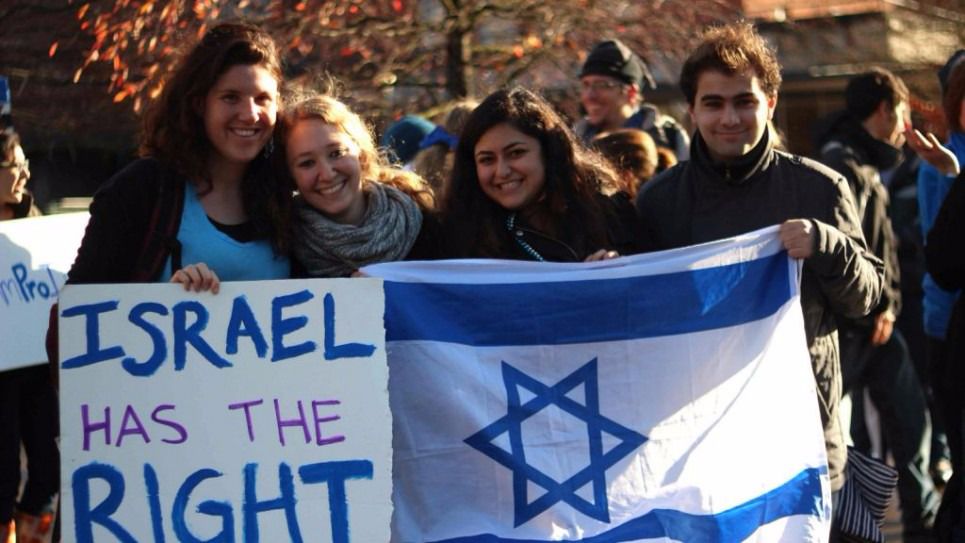 This controversial law was originally enacted in 1954 with the express purpose to prevent the entry of Palestinian refugees and sympathizers into Israel due to fear of terrorism.

In 2013 the law was amended due to huge increases in the number of illegal immigrants ( infiltrators ) coming in from Africa.  These amendments included limitations on the amount of time an infiltrator could be detained as well as increasing the number of anti-infiltration enforcement officers.  Israel also has an ingenious scheme where they will compensate detainees if they agree to go home.

The new amendments enable the Israeli government to give jail time to migrants on temporary visas for any criminal activity regardless of its severity as a way of ensuring a zero tolerance attitude of African attitudes towards women and rape.

All detainees are put through an identification process and medical examination.  Those who file for asylum are given temporary visas allowing them to remain in detention or in the Israel community for up to 3 years.  Anyone who aids migrants via smuggling, providing shelter or giving them with weapons are also up for lengthy harsh sentences.  People from Sudan and Eritrea are under no circumstances allowed to file for asylum.  People from these nations are given options of cash and a ticket home, or to be taken to a detention center.

In 2015, 45,000 Eritrean and Sudanese refugee were sent letters informing them they had 30 days to accept one of 3 options:
•   Israel’s offer of $3,500 in cash and a one-way ticket home
•   A one-way ticket to an unnamed third country in Africa
•   Incarceration at Saharonim detention center

Only 190 asylum seekers have been granted refugee status in Israel since it signed the 1951 Convention in 1954. 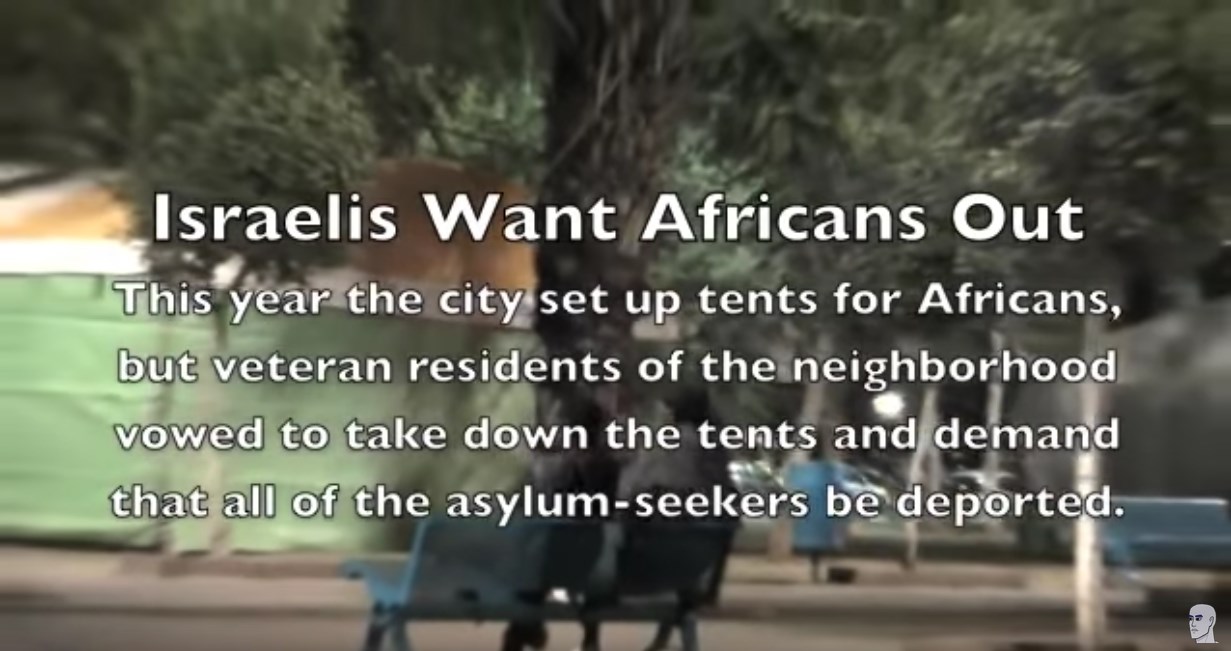 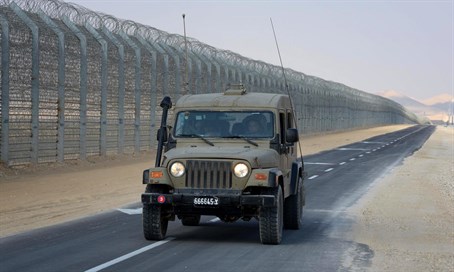 Since building a barrier between the Egypt and Israel border, the number of people seeking to enter Israel illegally has significantly decreased.

It should also be noted that a number of countries, including India and the United States, has sent officials over to Israel to review and learn about their successful barrier technology. 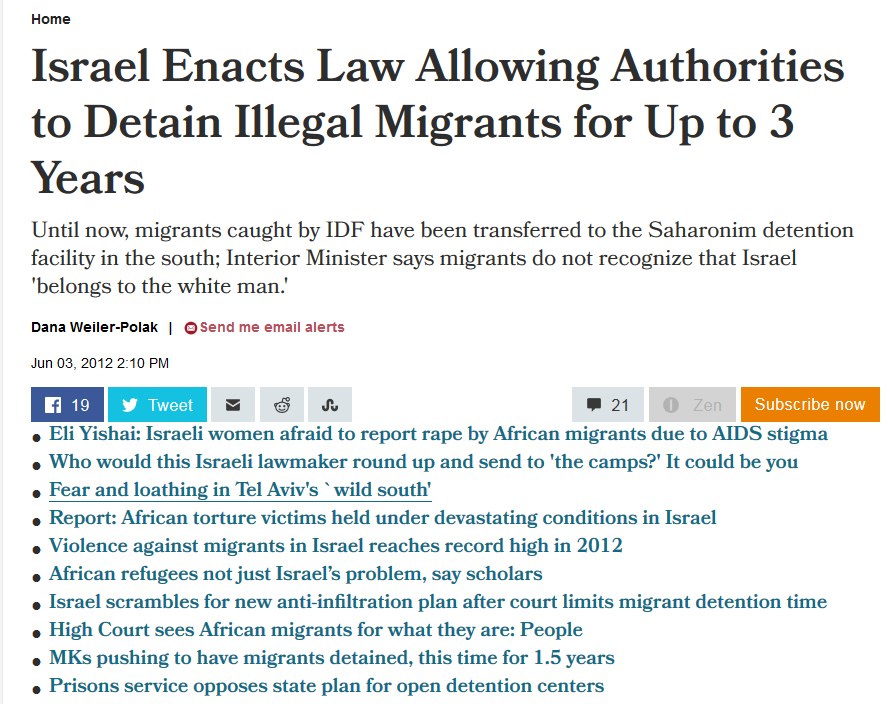 Israel's Anti-infiltration Law Is a Disgrace

Israeli government to refugees: Go back to Africa or go to prison 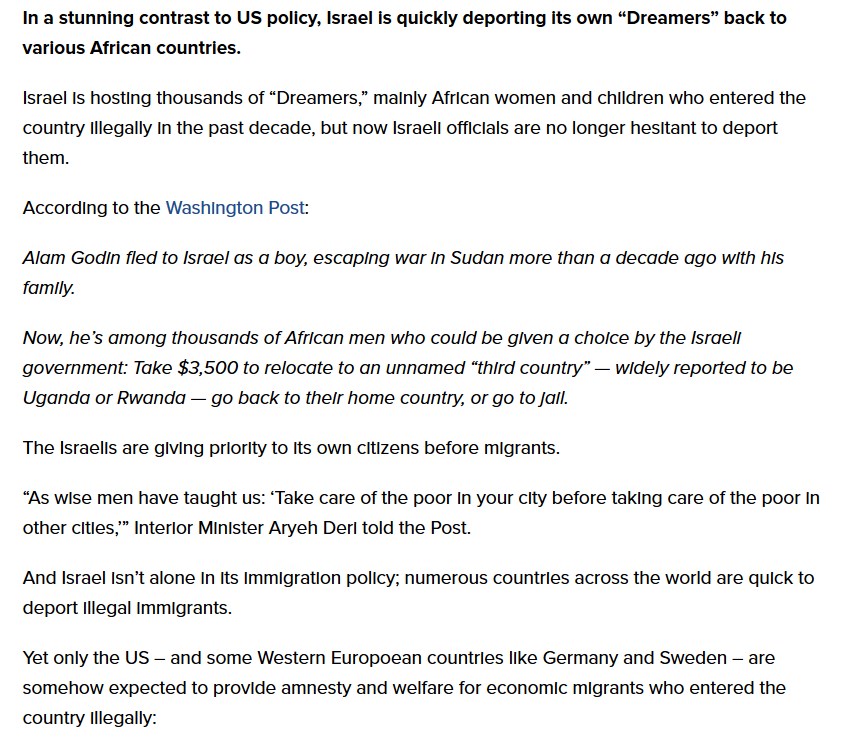 Ellie SearIt was reported at the beginning of April on RT news that the Israeli prime minister Benjamin Netanyahu had sent letters to half of the black population saying either go to Africa or go to jail. After a quick re-think he decided he could create more mayhem by dumping them on to white countries. He then decided that they should be sent to Canada, Italy and Germany and got the United Nations to support his "RACIST" decision. Why can't Europeans make the decision to make all unemployed blacks return to Africa? This is common sense considering the rising number of street killings and our unacceptable drug problem.