Jews Rabbi ‘Not even 1 million’ Jews killed in Holocaust" 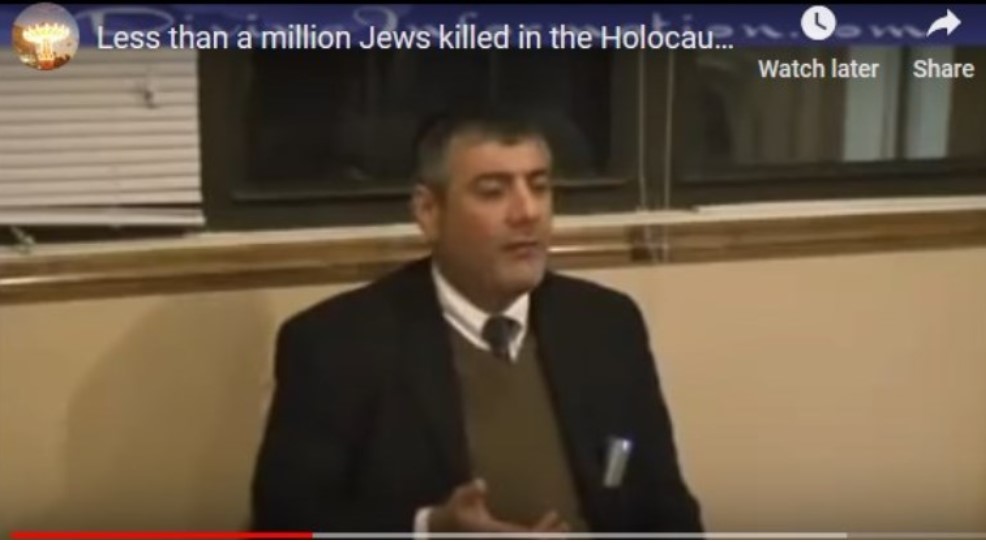 Millions of non Jews died in the holocaust, but the world only hears about the inflated number of Jews who perished at the hands of Hitler.

The Times of Israel

NY rabbi: ‘Not even 1 million’ Jews killed in Holocaust

A controversial ultra-Orthodox rabbi based in New York has said that fewer that one million Jews were killed in the Holocaust, claiming most of those counted among the usually cited figure of six million were not Jewish according to rabbinical law.

In a video posted online, Rabbi Yosef Mizrachi can be seen saying that high assimilation rates in pre-war Europe and broad Nazi definitions have exaggerated the numbers of Jews recorded as killed by the Nazis during the Holocaust. At least five million of the six million were “total goyim,” Mizrachi told the crowd, adopting a Hebrew word for non-Jews that many consider pejorative. 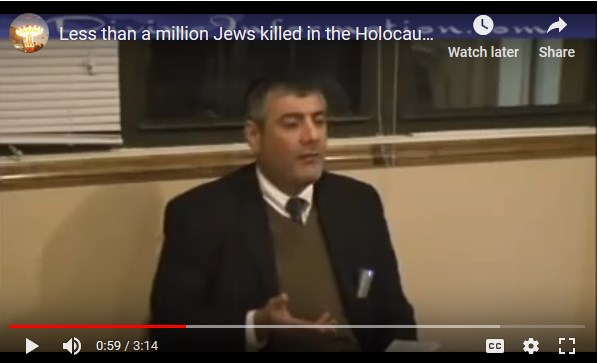 NY rabbi: ‘Not even 1 million’ Jews killed in Holocaust

A controversial ultra-Orthodox rabbi based in New York has said that fewer that one million Jews were killed in the Holocaust, claiming most of those counted among the usually cited figure of six million were not Jewish according to rabbinical law.

In a video posted online, Rabbi Yosef Mizrachi can be seen saying that high assimilation rates in pre-war Europe and broad Nazi definitions have exaggerated the numbers of Jews recorded as killed by the Nazis during the Holocaust. At least five million of the six million were “total goyim,” Mizrachi told the crowd, adopting a Hebrew word for non-Jews that many consider pejorative.

“The truth, I am telling you, is that not even one million Jews were murdered,” Mizrachi said, trashing accepted historical accounts. “A lot of non-Jews were meshed into the count, but in truth, how many Jews really were killed?”

Originally from Israel, Mizrachi moved to the United States in his twenties and received rabbinic ordination there. In the past decade he has been teaching at the Ohr Yeshiva in Monsey, New York, and producing kiruv or Jewish outreach, videos.

According to his website, DivineInformation.com, Mizrachi “has spoken in over 5,000 lectures worldwide as well participated in many weekend seminars, radio shows and other Hebrew and English events in which he enriched the knowledge and awareness of Judaism among thousands of Jews who once were lacking Jewish awareness whatsoever.”

In the video, one of thousands on his YouTube page — which has amassed over a million views — Mizrachi says it is “very simple” to explain his estimates for the actual number of Jewish victims in the Holocaust.

“If you look at the percent of assimilation that there was in Europe, which already reached 80 percent, it’s reasonable to assume that 80 percent of the 6 million were not-Jews,” Mizrachi said.

“If your grandfather from your father’s side was Jewish, and the rest were non-Jews, [you went] to the gas chambers. They also put in the wives of Jews that were entirely non Jewish. If she hid him, or they were hidden by non-Jews, if they caught them, they killed them also,” he said in an apparent reference to the Nazis’ definition of Jewishness, which sufficed with a single Jewish grandparent.

While historians differ on the exact number of Jews killed at the hands of the Nazis, the most commonly cited figure for the total number has been six million with near-universal agreement among Holocaust scholars. According to British historian Martin Gilbert, the total number of victims is just under six million—around 78% of the 7.3 million Jews in Nazi-occupied Europe at the time.END

The media is always talking about the gassing of the six million Jews.   When you discuss the 2nd World War and Hitler, the victims are generally always portrayed as six million Jews.  Historical literature of the Holocaust has focused entirely on these victims to the exclusion and detriment of sixteen to twenty million other European victims.  How is it possible to define a historic event based on the lives of the Jewish population, and not also acknowledge the millions of European lives that were also affected?  The Holocaust was more than a Jewish event.  Records kept by the leftwing Nazis in Germans prove they targeted millions of Communists, Czechs, Greeks, Gypsies, homosexuals, Jehovah's Witnesses, mentally and physically, handicapped and Germans who were against Hitler. The following link shows newspaper articles about 6 million Jews suffered or persecuted many times before the 2nd World War.  There is a Jewish belief that 6 million Jews must perish before the founding of Israel.  Why Hitler killed six million Jews

The six million figure used in the Jewish death toll is an estimate for total lives lost.  These Jewish lives were taken by a number of groups, not just by the Nazis.  It also includes Jewish lives lost in other nations and by various modes of killing.  Ukrainian deaths were due to Russian and Nazi perpetrators alike, with some killed on German soil, others killed on Russian soil and some killed outright while others were worked slowly to death.

"If Russian Jews, killed on Russian soil by both Nazis and Russians, are considered Holocaust deaths, then the Ukrainians killed alongside them should also be categorized as Holocaust deaths.  When groups of people are killed side by side -- in the same manner, by the same perpetrators, for the same reasons, (their ethnic identity), -- one cannot separate some from the group and call it a Holocaust and say the others were merely victims of war, or worse, completely ignore their numbers and leave them no record in history.  The criteria used to determine the six million Jewish deaths should be the same criteria used for the non-Jews.  By using the same criteria for determining Holocaust deaths among all victims, the question of whether non-Jewish deaths were simply victims of war becomes irrelevant."  (Overlooked Millions:  Non-Jewish Victims of the Holocaust) 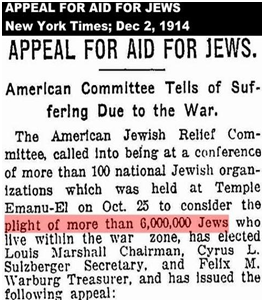 The figures given in World War II vary from various sources.  In many of the official records, Jews are not even mentioned as they only break it down by country, not religion or cultural groups.  The six million number is often used by Jews, and in fact, that exact number has been given when crying out for help since 1890, it can be traced back to prophesy in their ancient holy text, the Torah.  The Torah has been interpreted by some to say; the Jews are unable to reconquer and reclaim Palestine until six million Jews have been sacrificed.

Another website on the History and Origins of the six million number give the following quote:

Jewish prophecies in the Torah require that 6 million Jews must 'vanish' before the state of Israel can be formed.  "You shall return minus 6 million."  That's why Tom Segev, an Israeli historian, declared that the "6 million" is an attempt to transform the Holocaust story into state religion.  Those six million, according to prophecy had to disappear in "burning ovens" which the judicial version of the Holocaust now authenticates.  As a matter of fact, Robert B. Goldmann writes: . . . "Without the Holocaust, there would be no Jewish State."  A simple consequence:  Given six million Jews gassed at Auschwitz who ended up in the "burning ovens" (the Greek word holocaust means burned offerings) therefore, the prophecies have now been "fulfilled" and Israel can become a "legitimate state."

Instead of embracing and telling the tale of their fellow European victims against the Hitler dictatorship, the anti-Semitic Zionist false Jews influenced the media in a way to breed hatred against Germans and infect all Europeans, including true Jews.  This is used as an excuse for the genocide of the Europeans and other racial groups, and it is worth remembering that the Allied Forces fought to bring Hitler down because he was a dictator who controlled the media and German public opinion.  The average German citizen was not informed and was unable to speak their mind.  Those that did try to rebel ended up being killed or sent to a concentration camp. 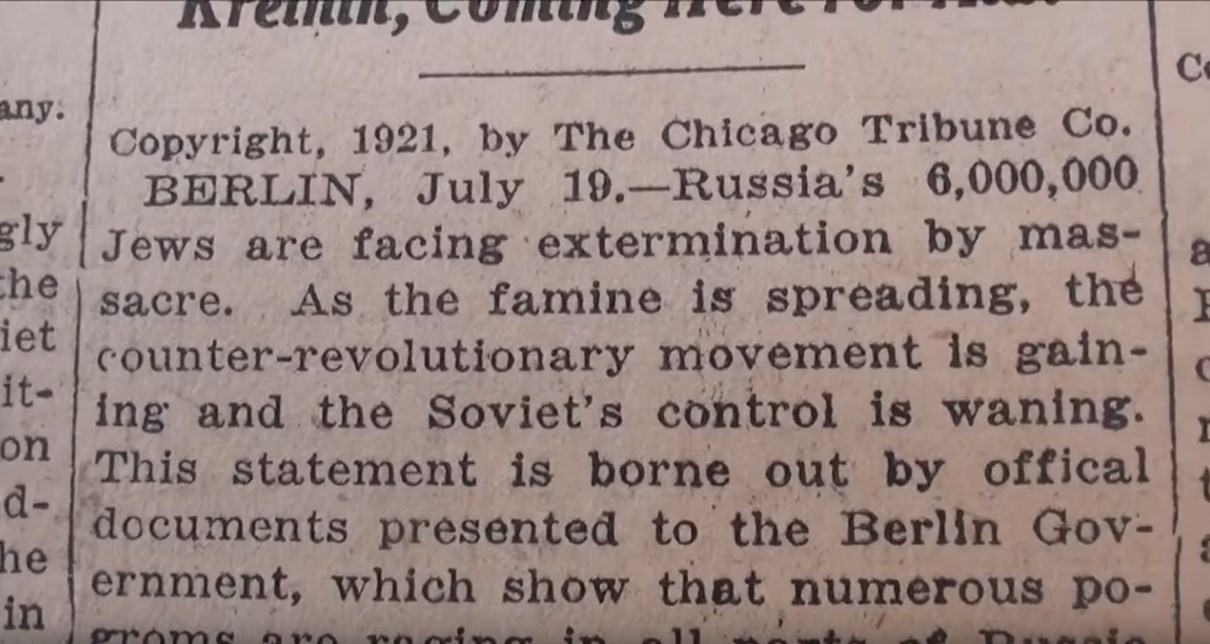 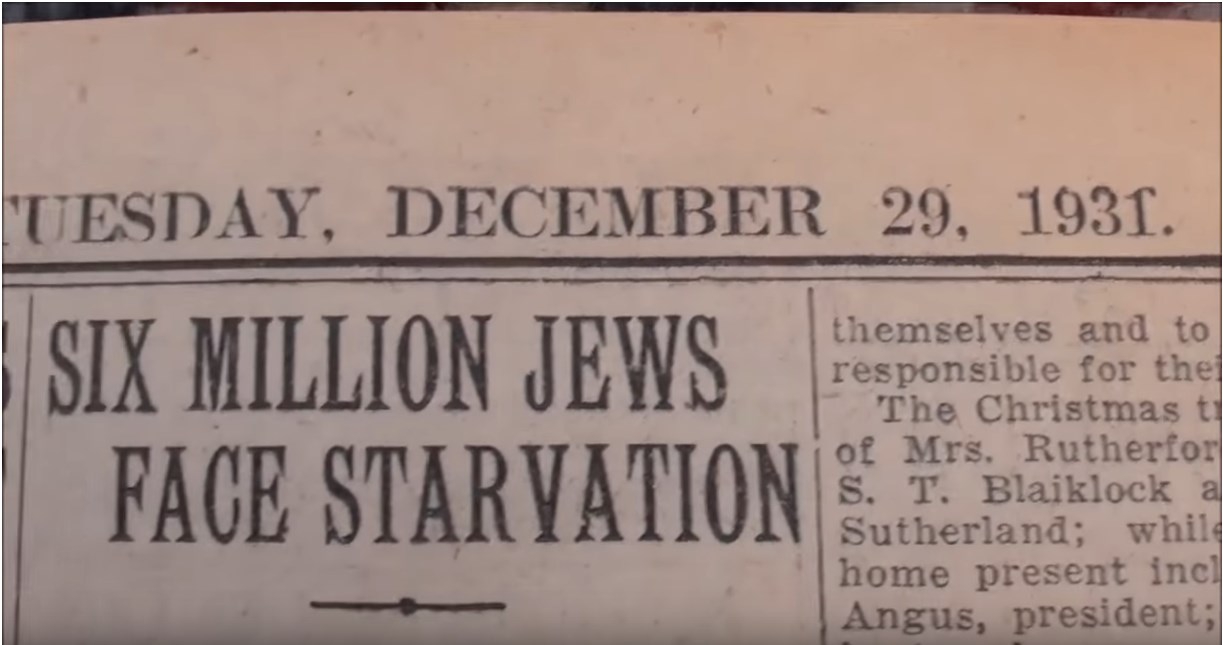 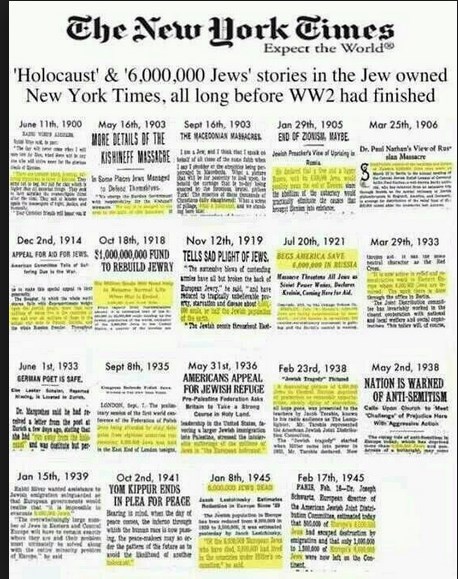 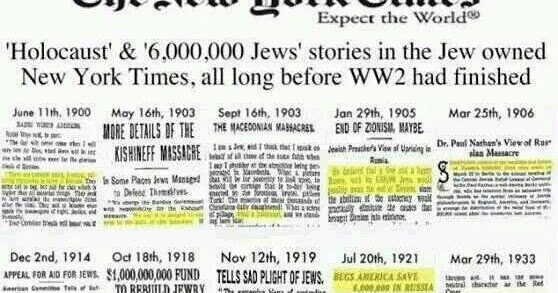